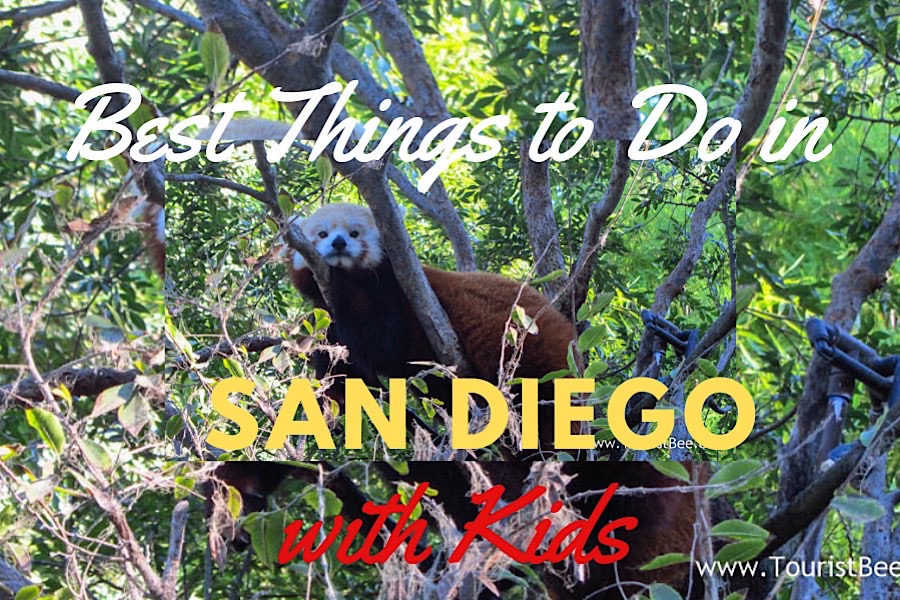 San Diego is an amazing place to visit. It provides the iconic California feeling of sun, the ocean and simple energy. When it comes to finding fun things to do in San Diego with kids, there are simply too many to list in an article. From my many trips to the San Diego area I have gathered my favorite things to do in San Diego with kids, from seeing sea lions at La Jolla, to theme parks and simply hanging out at the beach. So come along with me as we explore San Diego for families.

San Diego is amazing city to visit with your kids. From the world’s largest zoo to the amazing Sea World theme park, San Diego has it all and the only thing you need is…enough time. So come along with me as we explore the best things to do in San Diego with kids. 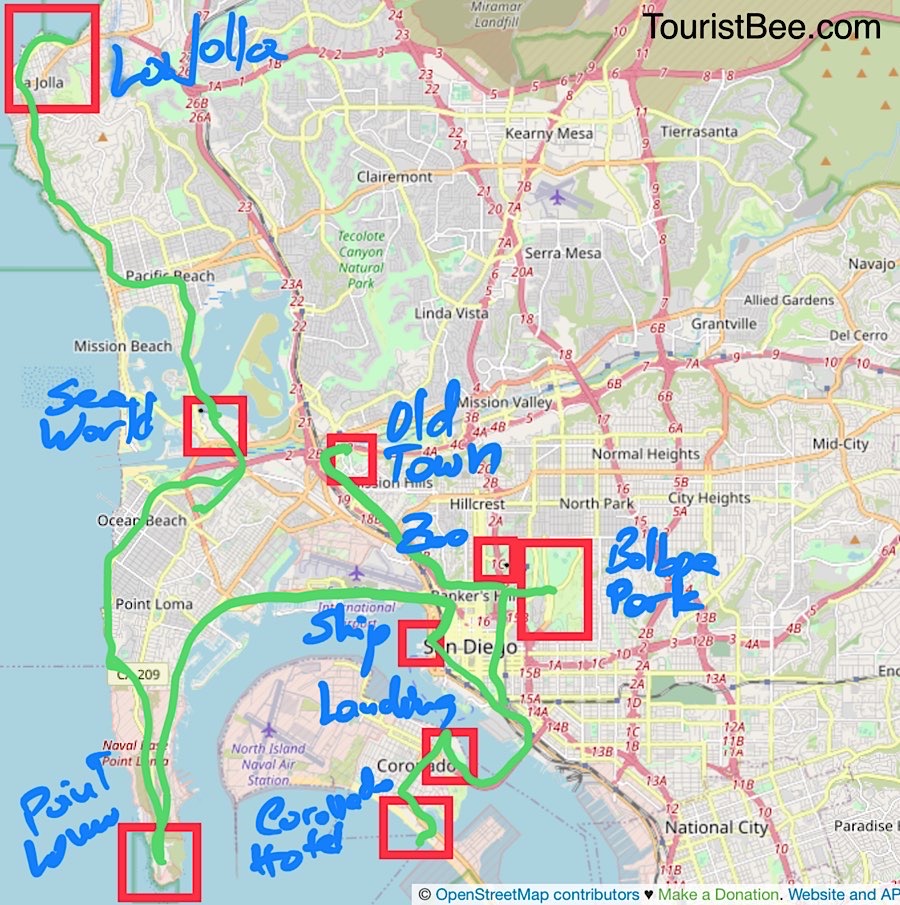 Map of fun things to do in San Diego with kids 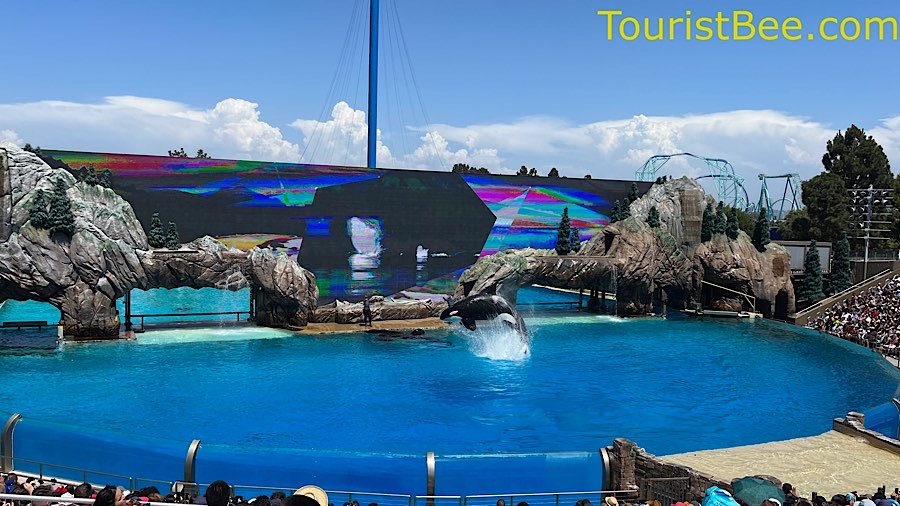 Sea World tops the list of things to do in San Diego with kids. Originally a marine zoological park, Sea World has evolved to not only teach kids about marine life, but also entertain them with rides, meet-and-greets with Sesame Street characters, and concerts.
Kids will love Sea World’s marine animal shows. The Orca Encounter show teaches kids about killer whales and their behaviors. The Dolphin Adventures show features the park’s bottlenose dolphins at play. The Sea Lion and Otter Spotlight show highlights the sea lions’ and otters’ characteristics, behaviors, and skills. 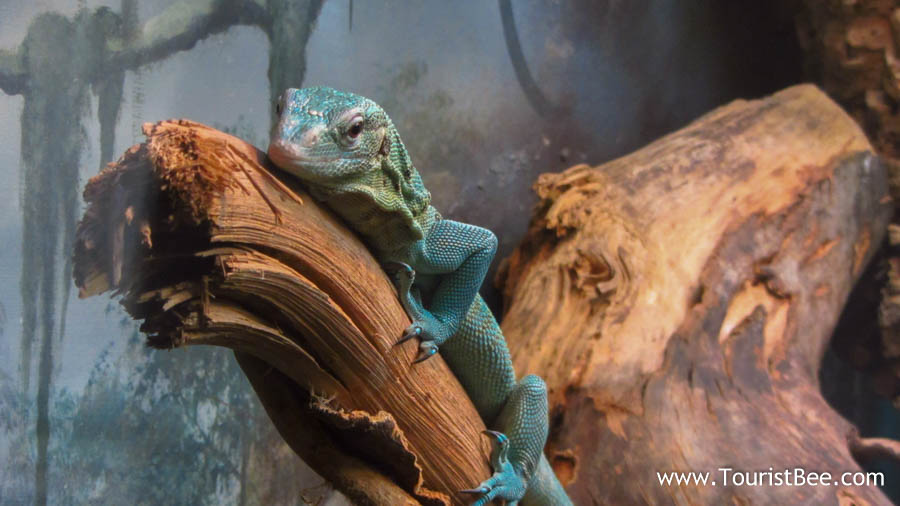 Visiting the San Diego Zoo is one of the most popular things to do in San Diego with kids. Located in Balboa Park, the 100-plus acre zoo has 4,000 animals representing over 650 species and subspecies spread over seven exhibit areas.
The highlight of the San Diego Zoo is watching animals like polar bears, lions, elephants, penguins, giraffes, and tigers. There are several animal shows and presentations. The Wildlife Explorers’ Basecamp lets kids learn about animals by mimicking their movements. The Zoo’s much beloved giant pandas returned to China in 2019. The panda habitat is now occupied by red pandas, snow leopards, grizzly bears, otters, and other animals. 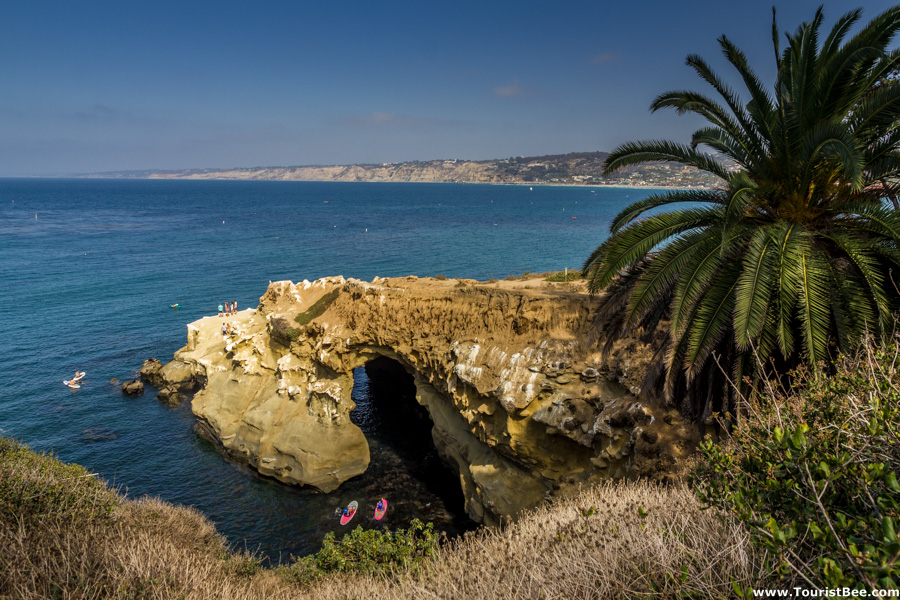 La Jolla Shores is a kid-friendly neighborhood in northern La Jolla. The highlight of La Jolla Shores is the mile-long La Jolla Shores Beach, a great place to launch a kayak or paddle board and explore the La Jolla caves and cliffs, and one of the favorite things to do with kids in San Diego.
On shore, kids can see sea lions and birds while walking along Ocean Boulevard and the Ocean Front Walk. The Cave Store (click for location) offers self-guided tours of a sea cave that’s accessible from a century old bootlegger’s tunnel and stairway located in the back of the store. 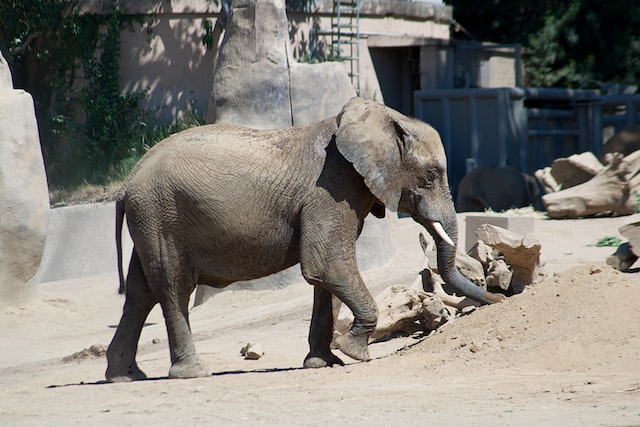 The San Diego Zoo Safari Park is home to the Zoo’s research, breeding, and conservation center and one of the great things to do in San Diego with kids. The 1,800 acre park houses 3,600 animals representing 300 species. The park has numerous play areas, rides, and animal petting and feeding areas. There are several optional safari tours available.
Popular exhibits include the African Woods and African Outpost, featuring rhinoceroses; Elephant Valley; Nairobi Village, with a goat petting area; and Walkabout Australia, where kids can see kangaroos and wallabies up close. The daily Cheetah Run show spotlights a cheetah’s running prowness. 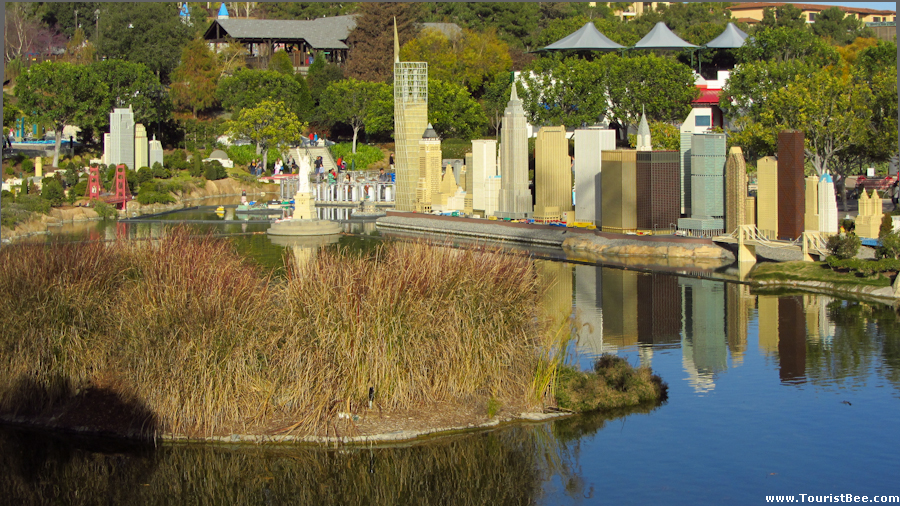 Legoland California offers something for every kid, including rides, an aquarium, a water park, and Lego-themed play areas. One of the fun things to do in San Diego with kids, Legoland has sixty attractions in ten theme areas, including best Legoland rides, exhibits, and activities suitable for younger and older kids.
Legoland’s activities include using Lego bricks to build Ferraris, robots, boats, and a lazy river raft. The aquarium offers shows and hand-on exhibits. Augmented reality, 4D, and live action shows incorporate Lego characters and worlds. Among the park’s 30,000 Lego models are large city replicas. Kids can trade minifigures with the park’s employees. 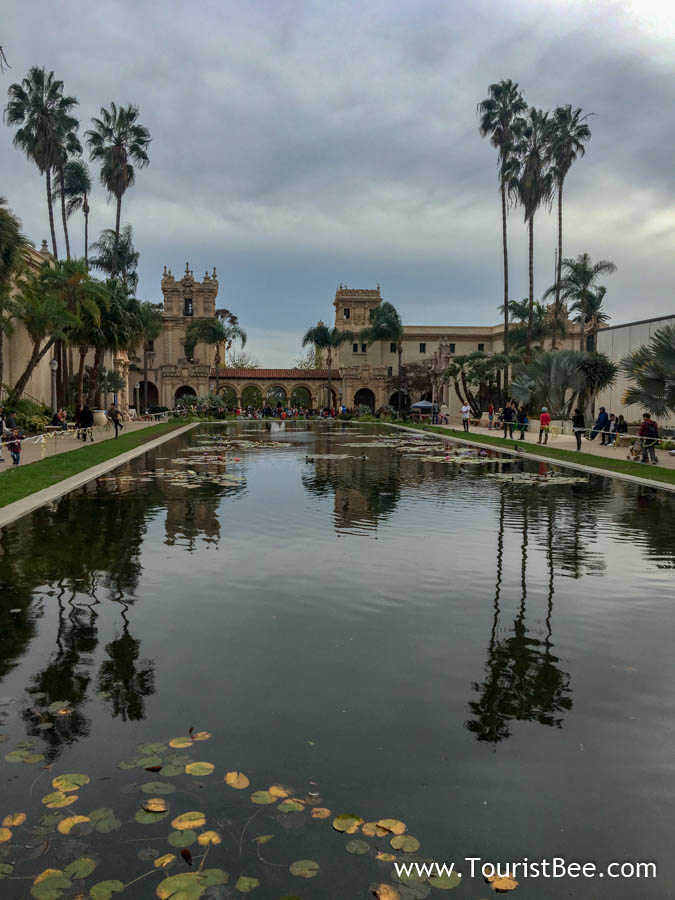 Established in 1868 and home to two 20th century Panama-California Expositions, Balboa Park is San Diego’s landmark park. Thanks to its family-friendly museums, performing arts centers, trails, and gardens, Balboa Park ranks among the best things to do in San Diego with kids. 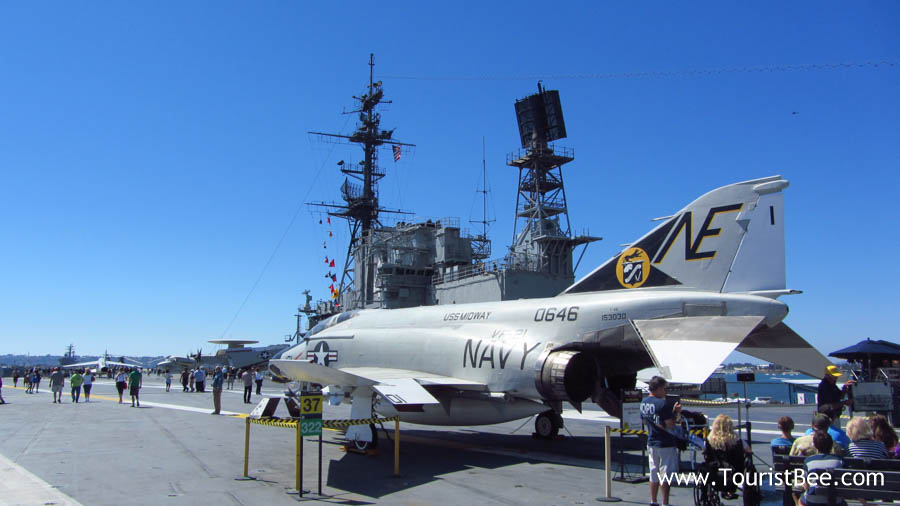 The aircraft carrier USS Midway was in service from 1945 to 1992. It opened to the public in 2004 as a museum and immediately became one of the awesome things to do in San Diego with kids.
On the flight deck, kids will enjoy seeing restored jet fighters, helicopters, attack aircraft, and specialty aircraft. There’s a guided tour of the USS Midway’s bridge. The hangar deck has World War II vintage aircraft and cockpit trainers. Below deck exhibits include the engine room, the galley, and the bunk areas. The junior pilot program allows kids to complete activities in order to earn their junior pilot wings. 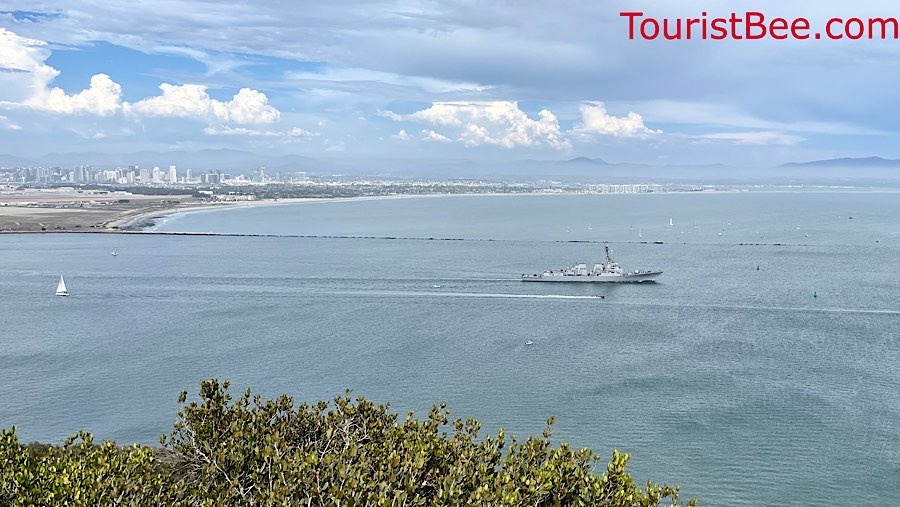 The Cabrillo National Monument sits on the location where Juan Rodriguez Cabrillo became the first European to set foot on what would become California. Today, the Cabrillo National Monument is part of a park whose history, scenery, and museums place it high on the list of things to do in San Diego with kids.
From the Monument, there are views of San Diego’s skyline, harbor, and Coronado Island. The Pacific Ocean, San Diego’s mountains, and Mexico can be seen on clear days. The Old Point Loma Lighthouse and a nearby military building have museums. Tidepools and whales are visible in winter. 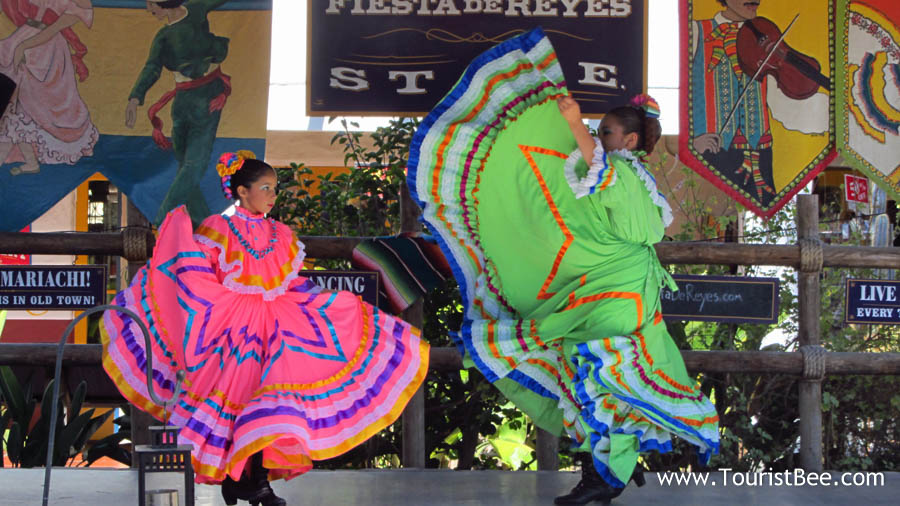 The Old Town State Historic Park is the site of the first European settlement in the future U.S. West Coast, and is where California began. The living history park, one of the cool things to do in San Diego with kids, includes historic buildings, museums, and period demonstrations.
The Park’s buildings include La Casa de Estudillo, the oldest surviving adobe; Seeley Stables, a museum with vehicles from the 1800’s; the San Diego Union building, a replica of an 1868 newsroom; and a blacksmith’s shop. An outdoor exhibit is devoted to the Kumeyaay, San Diego’s first residents. Park events include informal history talks and demonstrations by costumed interpreters. 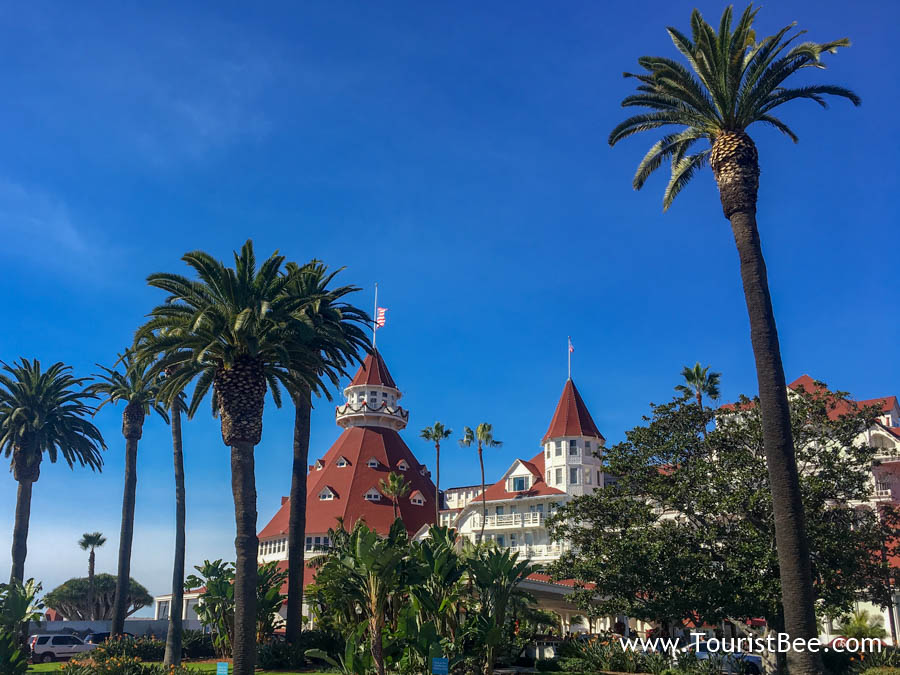 Is it Worth Visiting San Diego with Kids?

Absolutely!  Your kids will love their trip to San Diego.  You just have to be careful so you don’t do too many things in one day. Each one of the big attractions in San Diego, like Sea World, the Zoo and Safai Park should take an entire day. These are simply too big of an attraction to do more than one in one day.  You can clearly see that you can easily spend an entire week in San Diego and enjoy it thorougly with your kids.