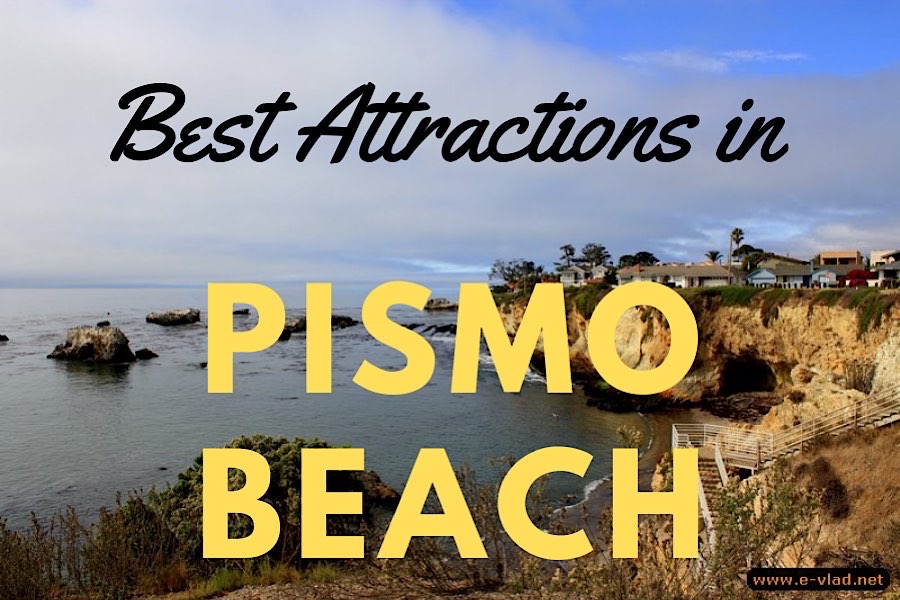 Pismo Beach is another California beach town which embodies the California vibe. When you think of California postcard photos, well Pismo Beach is certainly one of them. From gorgeous beaches and picturesque rugged cliffs to great food and animals and of course perfect weather, Pismo Beach has it all. So let’s explore together the best Pismo Beach attractions.

Images of summer in California, with surfers braving the waves and gorgeous sandy beaches, all these post card images that come to mind are present in Pismo Beach most of the days throughout the year. Come along with me as we explore my favorite Pismo Beach attractions.

The city of Pismo Beach lies along a beautiful section of California coastline. You can think of Pismo Beach as two areas, one being the Downtown area with the Pismo State Beach and Pier as the main attractions. Going North on the Pacific Coast Highway, just 5 minutes away, we come to the Shell Beach part of Pismo Beach city. This area is different, because it boasts gorgeous rugged coast line with bluffs and rocky outcrops full of caves and birds.

I love doing a long walk starting in the South with the Monarch Butterfly Grove, through the North Campground and walking towards the Pismo Pier on the boardwalk which starts on Addie Street (park at the Surfers’ Parking Lot) near the Sandcastle Hotel (my favorite hotel on the sand). The walking path works its way right on the beach all the way to the Pier. Then from the Pier I love walking through the downtown area and try some of the great restaurants. 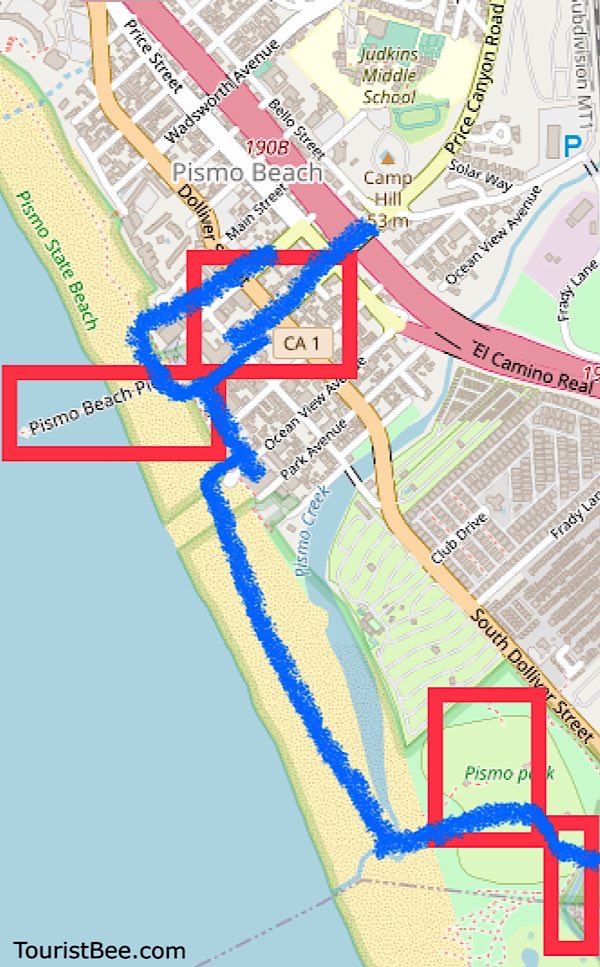 I love pulling into Cliff Avenue from the PCH and following around the Dinosaur Caves Park as it becomes Ocean Boulevard. Stopping at the small parks along Ocean Boulevard is by far one of my favorite Pismo Beach attractions. The views are amazing and there are several staircases leading to small, secluded beaches surrounded by tall rugged cliffs.

With our Pismo Beach walking tour maps in hand, let’s start exploring the best Pismo Beach attractions and take in this gorgeous part of the California coast. 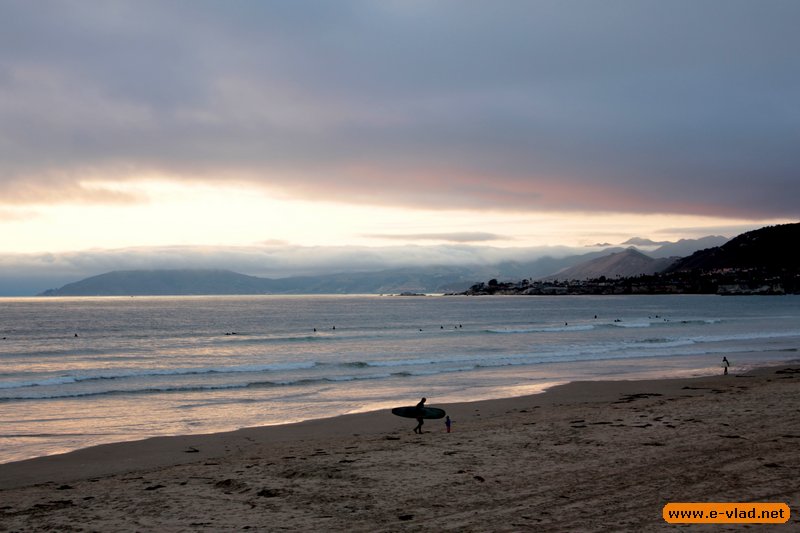 Pismo Beach, also called Pier Beach, is the quintessential California beach. Centrally located at the Pismo Beach Pier Plaza near downtown, Pismo Beach is large, flat, beautiful, never crowded, and one of the more scenic Pismo Beach attractions.
Pismo Beach attracts sunbathers, surfers, and paddle boarders. Beach volleyball players will find sand courts on both sides of the pier. The water temperatures are better suited for wading than swimming. The beach is an ideal site to watch gorgeous sunsets, with even more stunning views once the lights turn on at the adjacent Pismo Beach Pier. 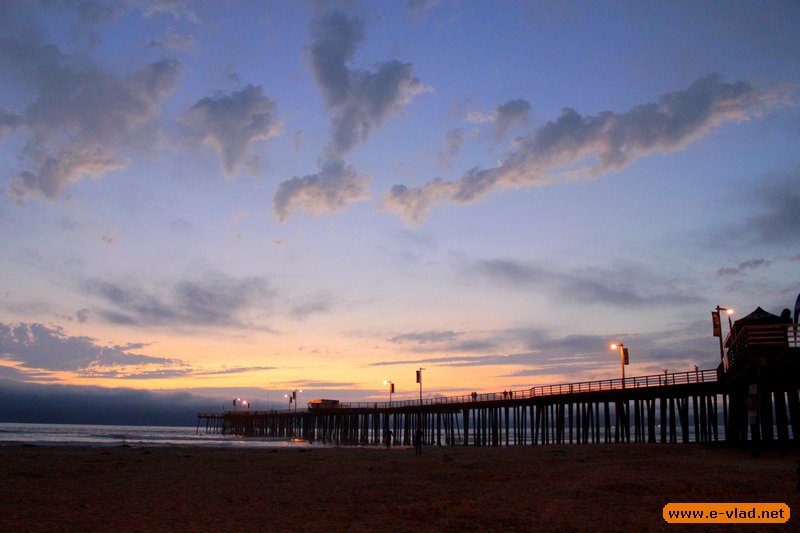 Pismo Beach Pier Plaza consists of two must see Pismo Beach attractions, the Pismo Beach Pier and the Pismo Beach Pier Promenade. The Promenade features tall illuminated letters that spell Pismo Beach, a whale-themed playground, kids’ slides, and vintage Airstream trailers where merchants sell bait and street food.
The Pier is a perfect place for viewing the sunset, people watching, and romantic strolls. There’s year-round fishing, with no license needed. Visitors can watch surfers catch waves, birdwatch, or enjoy the peace and calm of the ocean. The Pismo Beach Clam Festival takes place at the Pier each October and includes a clam chowder cookoff, a clambake, a surf contest, live music, and a parade. 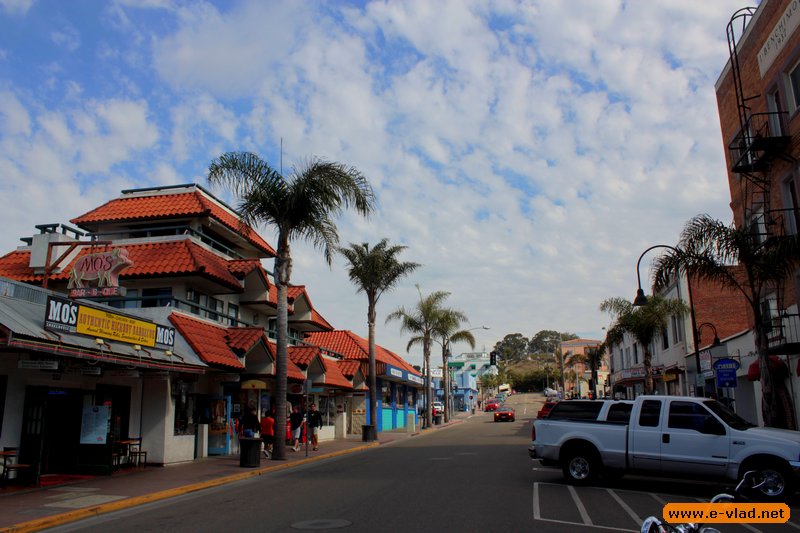 Pismo Beach’s downtown, bordered by Hinds Avenue, Pomeroy Avenue, and Highway 1, is one of the popular Pismo Beach attractions. Downtown Pismo Beach is a short walk from Pismo Beach Pier Plaza and is home to many shops and restaurants.
Downtown Pismo Beach’s shops are locally owned and cater to tourists with a variety of souvenirs, surf gear, and sweets. Restaurants include Splash Café, whose popular clam chowder has won multiple awards and is a Clam Festival favorite; and Mo’s Smokehouse, a barbecue restaurant serving award-winning ribs with several homemade regional style sauces to choose from.

Dinosaur Caves Park, an 11-acre oceanfront, bluff top park, serves as the unofficial start of the Shell Beach neighborhood. The stunning views of the Pacific Ocean from the park make it one of the top family-friendly Pismo Beach attractions.
Kids will enjoy the large play area featuring a dinosaur, dinosaur eggs, dolphins, a seal, the U.S.S. Imagination, and other playground equipment. A trail through the park takes tourists to cliffs that provide spectacular coastline views. The park hosts a summer concert series and the annual Taste of Pismo Festival. Dinosaur Caves Park marks the beginning of the Shell Beach area of Pismo.

One of the most beautiful Pismo Beach attractions, the Shell Beach cliffs, draws tourists to some of the most picturesque coastal views. Several blufftop parks are located along Ocean Boulevard and neighboring streets. Each park is situated on the edge of a cliff, showcasing the rugged coastline. Stairways provide beach and tide pool access, allowing kids to play and explore.

Eldwayen Ocean Park is one mile north of Margo Dodd Park on Ocean Boulevard. The long, narrow oceanfront park has a shady beach and tide pools, accessible from two stairways. A grassy picnic area and benches have ocean views. Rock formations near the beach attract birds. Crabs and sea urchins inhabit the tide pools. Collectors will find plenty of seashells. 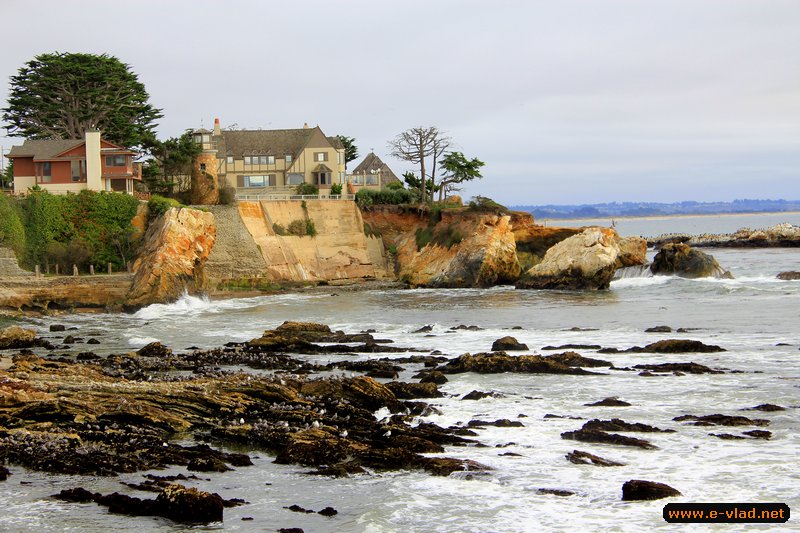 Memory Park is on Seacliff Drive, one-and-a-third miles north of Eldwayen Ocean Park. The park, on top of a steep cliff, has panoramic ocean views and is quieter than other parks. Rock formations attract birds and sea lions. A stairway provides beach and tide pool access. Picnic tables and benches have ocean views. The beach is popular with surfers and kayakers.

Spyglass Park, a neighborhood blufftop park on Spyglass Drive, has fantastic ocean views, a playground, and a picnic area. A trail leads to a sandy beach that’s accessible at low tide. The mile-long beach attracts surfers, sunbathers, and families. A walk down the beach leads to sea caves and tide pools. An outdoor shower gets the sand off of beachgoers. 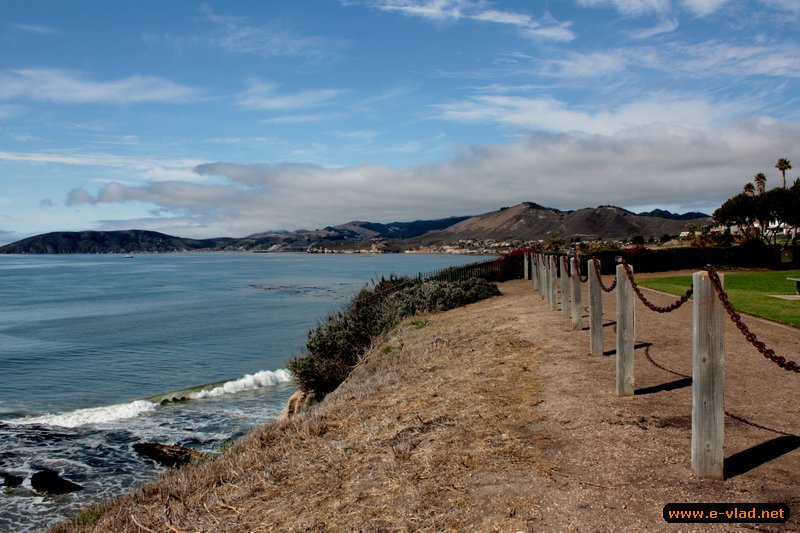 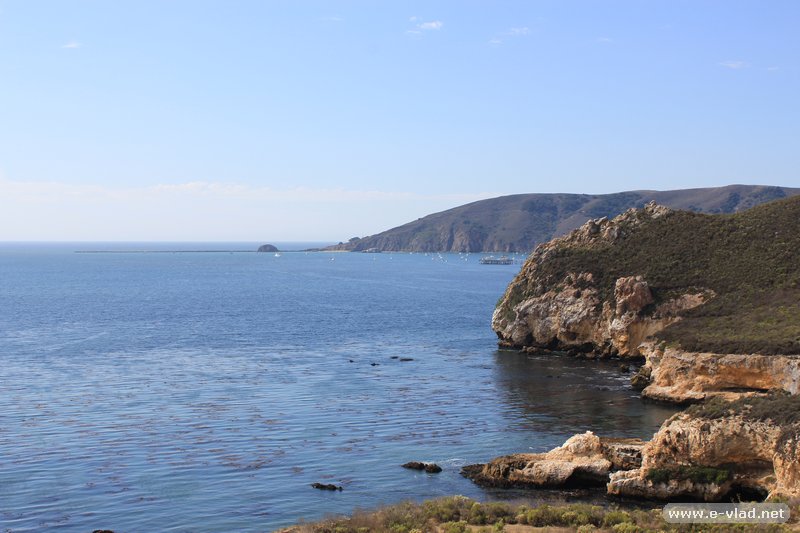 Smuggler’s Cave, one of the Avila Sea Caves, was formed by the rugged coast. Located at Pirate’s Cove, Smuggler’s Cave is reached via a trail with fabulous coastal views that connects Cave Landing and Avila Beach. While Smuggler’s Cave is actually a graffiti-filled tunnel, the view from inside the tunnel puts it on the list of must-see Pismo Beach attractions.
The trail ends at a sheer cliff just past Smuggler’s Cave. where there are fantastic ocean, shoreline, and occasional seal and sea otter views. Nearby trails lead to the top of Smuggler’s Cave and to Shell Beach. A separate trail en route to Smuggler’s Cave leads to the clothing-optional Pirate’s Cove Beach. 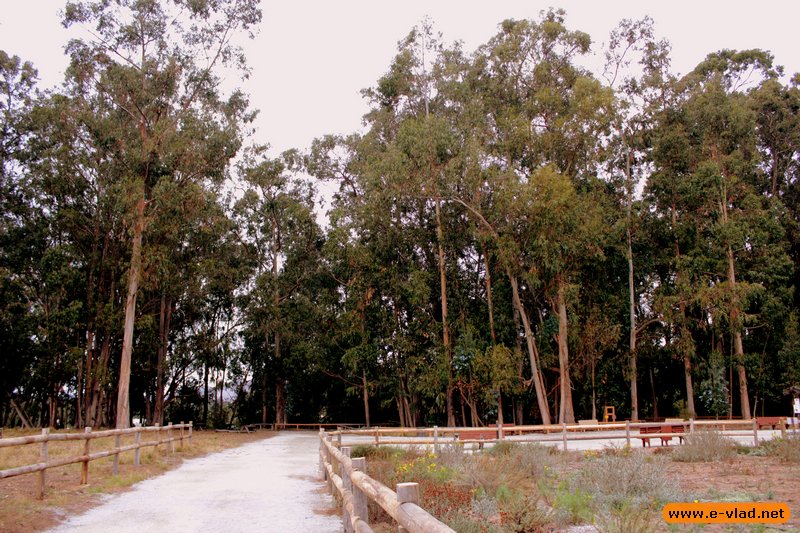 One of the more well-known Pismo Beach attractions is the Monarch Butterfly Grove. Located at Pismo State Beach, the Butterfly Grove attracts thousands of orange and black western monarch butterflies each year as they escape the cold northern winters.
The butterflies start arriving in late October and stay through February. The butterflies form clusters resembling shingles on the limbs of the grove’s eucalyptus and Monterey cypress trees so they can keep warm and dry. An adjacent natural garden provides nectar for the butterflies. The paths through the Grove make for a nice, shaded walk. Volunteer docents are available to answer questions. 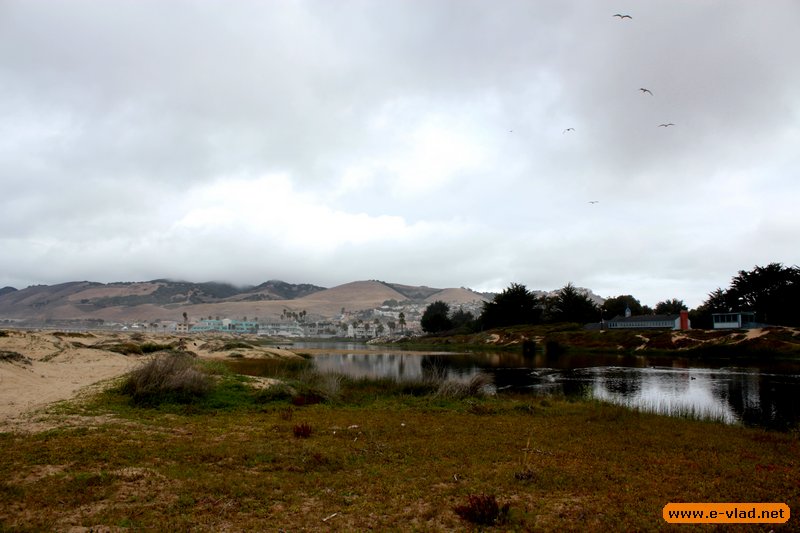 Pismo State Beach allows visitors to camp at the beach. The North Beach Campground, with 103 tent campsites, is located next to the Monarch Butterfly Grove, behind the sand dunes. The campground is within close proximity to other Pismo Beach attractions like the Pismo Beach Pier.
At Pismo State Beach, campers can swim, surf, fish, and bird watch. Walking trails are found along the coast and around the Oceano Lagoon. With a license, campers can dig for the famous Pismo clams. A five mile stretch of sand dunes south of the campground is open to four-wheel drive vehicles and ATVs.

Is Pismo Beach Worth Visiting?

Absolutely! The Pismo Beach area, including Shell Beach and Avila Beach boast some of the most beautiful coastal views of all Southern California. The laid back feeling of Pismo Beach makes it a quintessential California destination and it is post card perfect. From rugged coastline to beautiful beaches and interesting trails, Pismo Beach should make it on anyone’s list who wants to experience true California.