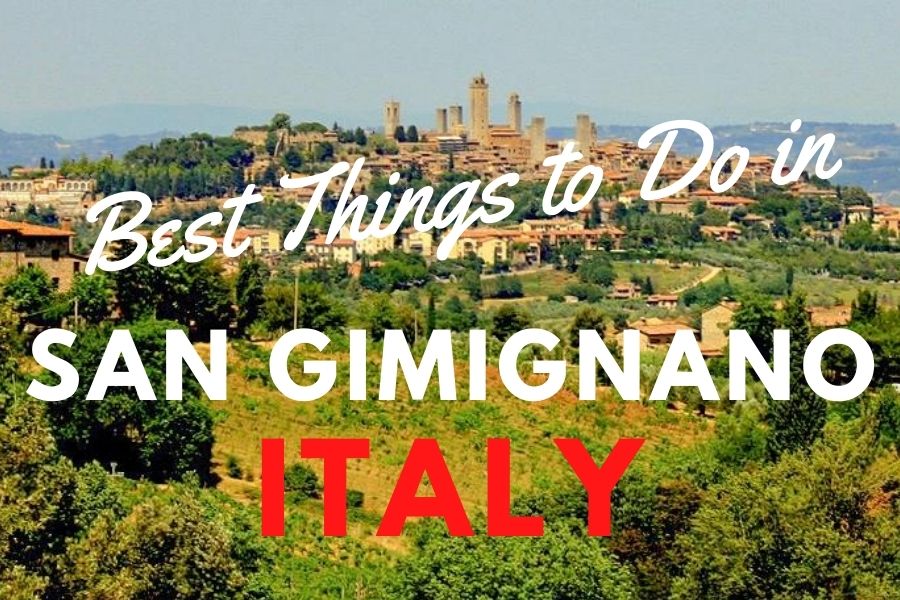 San Gimignano is one of my favorite places to visit in Tuscany. I love the history surrounding this place and all the amazing architecture and charm. We came to San Gimignano on the advice of a friend who insisted that it’s worth our efforts to visit while in Tuscany. He was right, as we enjoyed visiting San Gimignano for a day, coming from Florence. Situated in the Tuscan countryside, San Gimignano dominates the nearby rolling hills. Come along with me as we explore the best things to do in San Gimignano.


We came to San Gimignano after spending one day in Florence. This place is busy in the summer months, with parking a bit hard to come by. However, we found enough parking a bit down the hill which allowed us easy access to St John’s Gate entrance. With our strollers and kids, we were ready to start exploring this medieval jewel. So, come along with me as we explore the best things to do in San Gimignano.

My Favorite Things to Do in San Gimignano

Before going into details about the best things to do in San Gimignano, let me give you and overview of my favorite attractions. 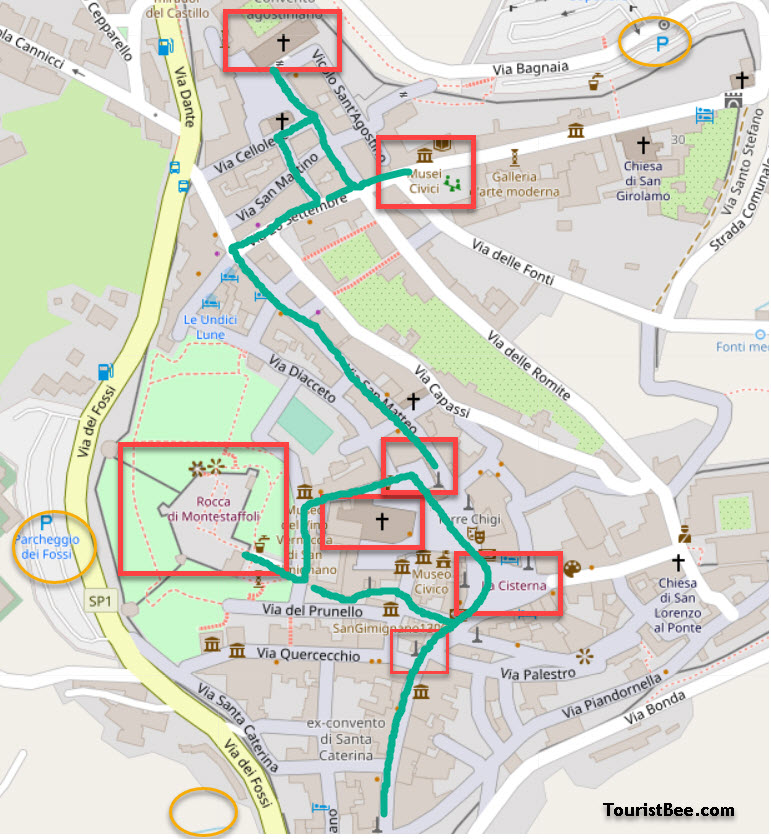 With our map in hand and our comfortable shoes in our feet, we starting discovering the best things to do in San Gimignano.

Stay in San Gimignano. Hotel Bel Soggiorno has amazing location, right inside the medieval walls, so within easy walking distance from anywhere. For more of a budget option but still close to Gate San Giovanni, try Il Feudo, which is also an excellent option. You can also find other budget hotels in San Gimignano. 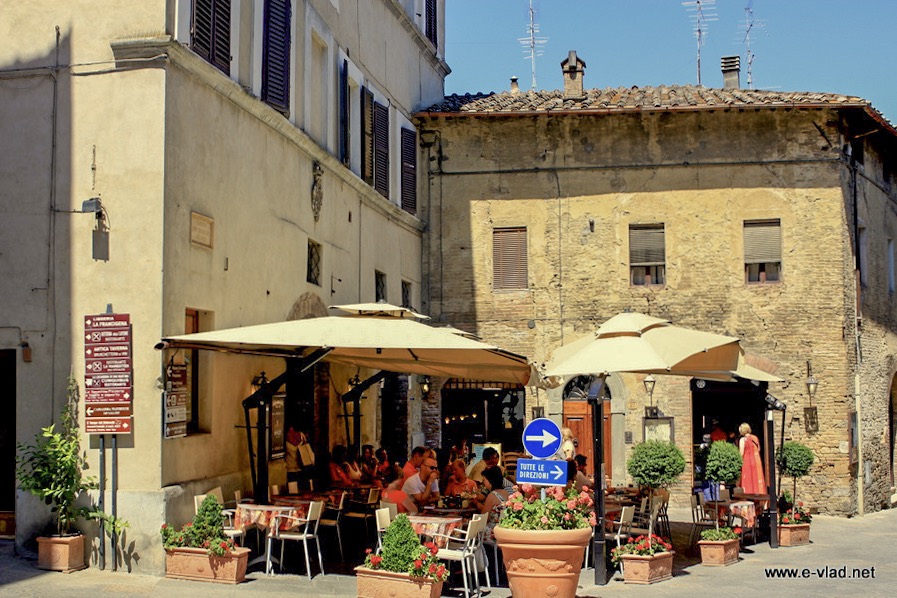 To begin your walking tour, enter the historic center of San Gimignano through Porta San Giovanni – and don’t forget to stop for a picture or two. This porta, or gate, is where travelers from Siena and other Southern Italian cities have entered San Gimignano for centuries. The town sits on the historic Via Francigena, a medieval road that leads to Rome. For this reason, San Gimignano was a stopping point for many Catholic pilgrims on their way to the Vatican. Take in all this history as you walk through the gate to discover all the things to do in San Gimignano.

Walk north on the narrow Via San Giovanni and look straight ahead – you’ll see an imposing tower a little ways in the distance. This is your next stop on the walking tour: Torre Dei Cugnanesi. As you walk closer, take in the medieval façades of the buildings of either side of you and stop in any shops that interest you along the way.

Torre Cugnanesi is one of fourteen remaining San Gimignano towers that compose the town’s famous skyline. Most Italian cities feature one or two significant towers, but many have been destroyed by earthquakes or during World War II. While San Gimignano once had more than seventy towers, fourteen is still an impressive number to stay standing in such a historic town. 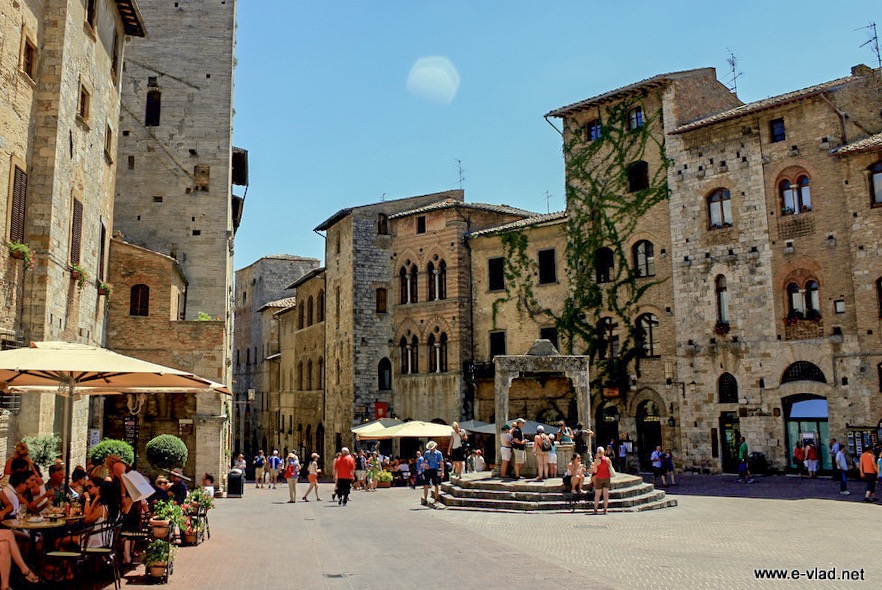 If you continue walking north on Via San Giovanni, you will walk under another medieval gate called Arco dei Becci and find yourself in Piazza della Cisterna, an open plaza with a large octagonal structure in the center.

This structure, which looks like a stone fountain, is the opening to an underground cistern that was constructed in 1287. The cistern lies beneath the piazza and is surrounded by more of San Gimignano’s classic medieval architecture.

This is a great spot to catch another view of both Torre dei Cugnanesi and Torre dei Becci to the south, another one of the San Gimignano towers. 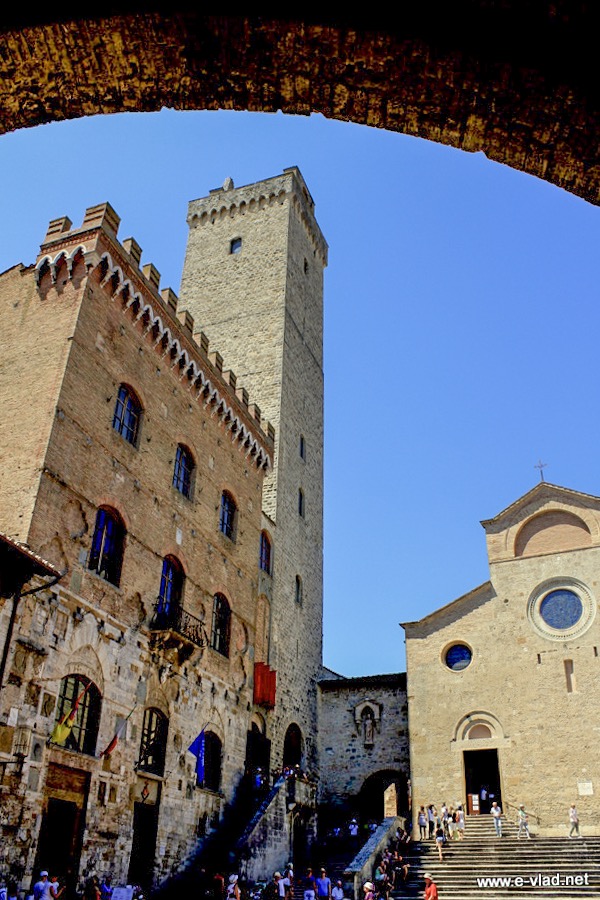 Take Via San Matteo a few steps north-east to the Piazza del Duomo. This plaza is one of the larger ones in San Gimignano, and it features the central church in the town – the Collegiata di Santa Maria Assunta, or the Collegiate Church of Saint Mary of the Assumption. Visiting this landmark is one of the most essential things to do in San Gimignano, especially for art lovers.

Although the outside is mostly plain brick, the interior features expansive, well-preserved frescoes by artists like Domenico Ghirlandaio and Lippo Memmi, as well as striped marble details along the pillars in the nave. This church, along with a few other locations in San Gimignano, was featured in Franco Zeffirelli’s 1999 film Tea with Mussolini. 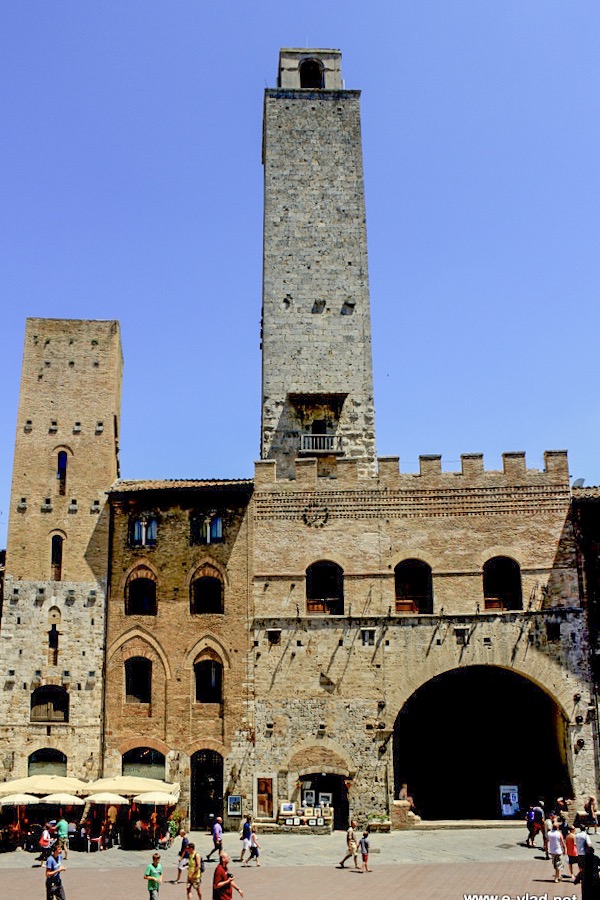 While you’re in Piazza del Duomo, you’ll notice yet another imposing stone tower on the other side of Via San Matteo from the church. This is Torre Rognosa, the second tallest of the San Gimignano towers at 52 meters (almost 171 feet) tall. The tallest tower at 54 meters, Torre Grossa, is also in Piazza Duomo right next to the church.

Torre Rognosa and Torre Grossa were constructed around 1200 and 1300, respectively. Towers were often built as a sign of wealth and power for significant families that lived in Italian cities, but Torre Grossa was constructed as a municipal building to serve as a symbol of San Gimignano.

A pair of medievel towers, Torri dei Salvucci are an impressive site in San Gimignano
See my photos from San Gimignano

Around the corner from Piazza del Duomo is Piazza delle Erbe, where you will find a small marketplace and two more tall towers – the Torri dei Salvucci. The Salvucci family constructed these towers to show dominance over the mayor of San Gimignano at the time, who owned Torre Rognosa. Not only did they construct two towers instead of one – both towers were taller than Torre Rognosa. Outraged, the mayor ordered that the Torri dei Salvucci had to be shortened so he could regain his status of owning the tallest tower in San Gimignano.

If you want to experience one of the most memorable things to do in San Gimignano, you can actually book a stay in one of the Torre dei Salvucci, which has been refurbished into an 11-story vertical apartment. 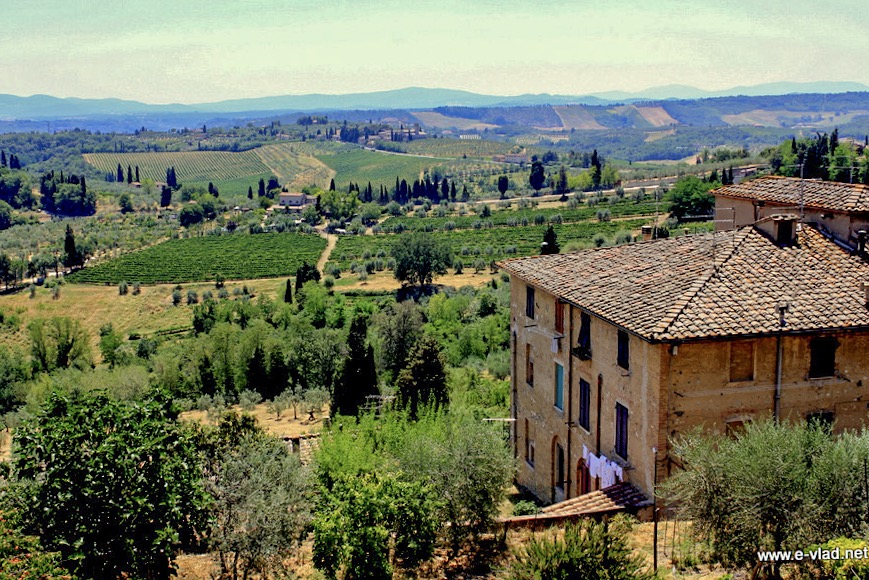 Walk east past the church and then make a slight left until you find yourself at the Rocca di Montestaffoli, a public park on the ruins of the town’s 14th-century fortress. From here, you can see some of the most beautiful views of the surrounding countryside, from the classic Tuscan rooftops to the Chianti vineyards.

There is plenty of room here to bring a picnic, or even just a refreshing drink to take a break from walking. If you haven’t already tried it, get a Lemonsoda from any convenience store or tourist stand for an especially tart, sugary beverage. Sitting in this park and taking in the views is one of the most relaxing things to do in San Gimignano. 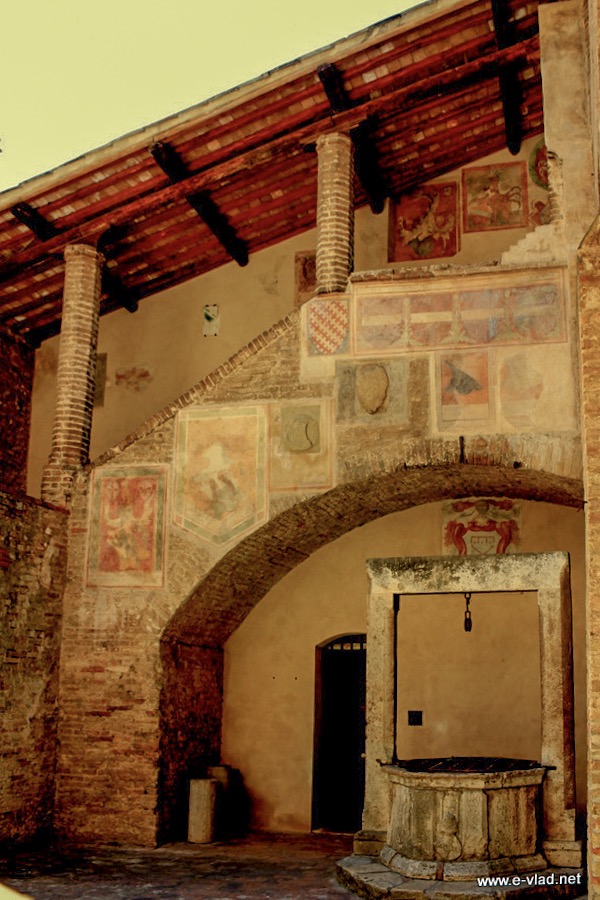 Make your way back to the Piazza del Duomo when you’re ready for a visit to San Gimignano’s Civic Museum. This museum is located in the Palazzo Comunale, or Town Hall. The first floor includes a few preserved meeting rooms, including the Sala Dante that was once visited by the famous poet. An art gallery on the second floor contains many works of mostly medieval Florentine and Sienese paintings.

If you’re visiting the museum, you can buy combination tickets that will get you access to a few other spots in the center of San Gimignano, including access to climb Torre Grossa. 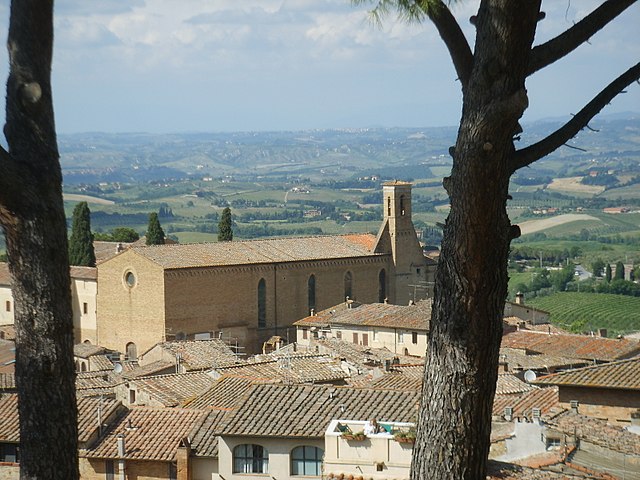 The Church of Saint Augustine (Chiesa di Sant’Agostino) is the second oldest church in town having many colorful frescoes inside.
Photo credit: Sailko

Finally, walk north on Via San Matteo and make a right on Via Cellolese. Shortly, you’ll arrive in front of the Chiesa di Sant’Agostino, the second largest church in the town. If you love learning about history, visiting Sant’Agostino has to be on your list of things to do in San Gimignano. The church was constructed in the 13th century, and similar to the Collegiata is quite plain on the outside but intricately decorated within.

There are many colorful frescoes inside, including an altarpiece by Piero del Pallaiuolo, and there are multiple chapels along the nave with more paintings and statues by well-known Tuscan artists. The floor is decorated with tiles made by Andrea della Robbia, a famous ceramicist who brought glazed terra cotta into popularity in Italy.

Is San Gimignano Worth Visiting?

Yes, absolutely! After seeing the best things to do in San Gimignano, you will get an authentic look into the Tuscan countryside, outside of large cities like Florence and Siena. San Gimignano was such an enjoyable visit for our family, that we started telling everyone about. From amazing history to the beautiful surrounding countryside, San Gimignano is a jewel of a town well worth your time to visit.