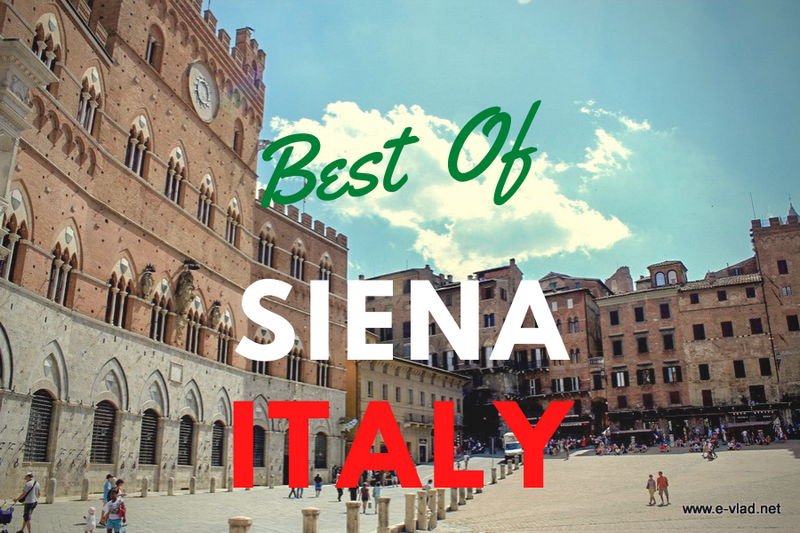 After Florence, Siena is the most visited city in Tuscany. With its rich history and amazing art and architecture, Siena is a must-see place on your tour of Tuscany. Because there are so many things to do in Siena Italy, consider allocating at least one entire day for visiting this beautiful city.

What to Expect when Visiting Siena 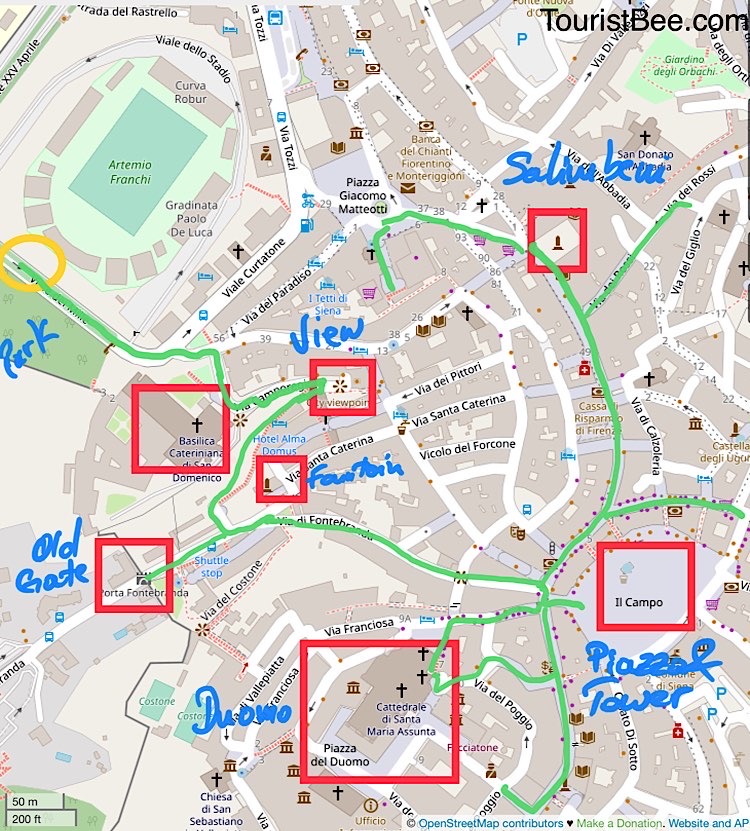 With our walking tour map of Siena, let’s put on our comfortable walking shoes and start exploring the best things to do in Siena Italy. 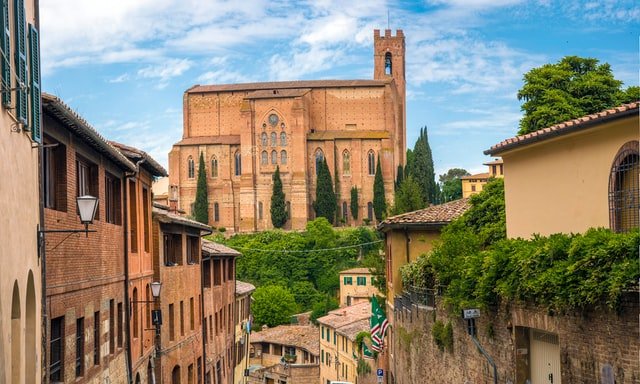 First on your list of things to do in Siena Italy is to visit one of the most important religious landmarks in the city. After parking at the Fortezza Medicea near the Stadio Artemio Franchi, walk East on Viale dei Mille to arrive at the Basilica Cateriniana di San Domenico.

Construction began on this imposing brick structure in the year 1226 and lasted for almost two centuries. The architecture style is mainly Gothic, and the interior of the Basilica features frescoes by Antonio Bazzi, or Il Sodoma, one of the pioneers of the Sienese High Renaissance painting style.

While visiting the basilica, you can also view their collection of impressive holy relics, including the mummified head of Saint Catherine. Be sure to walk across the piazza when you leave to see sprawling views of Siena’s historic city center. 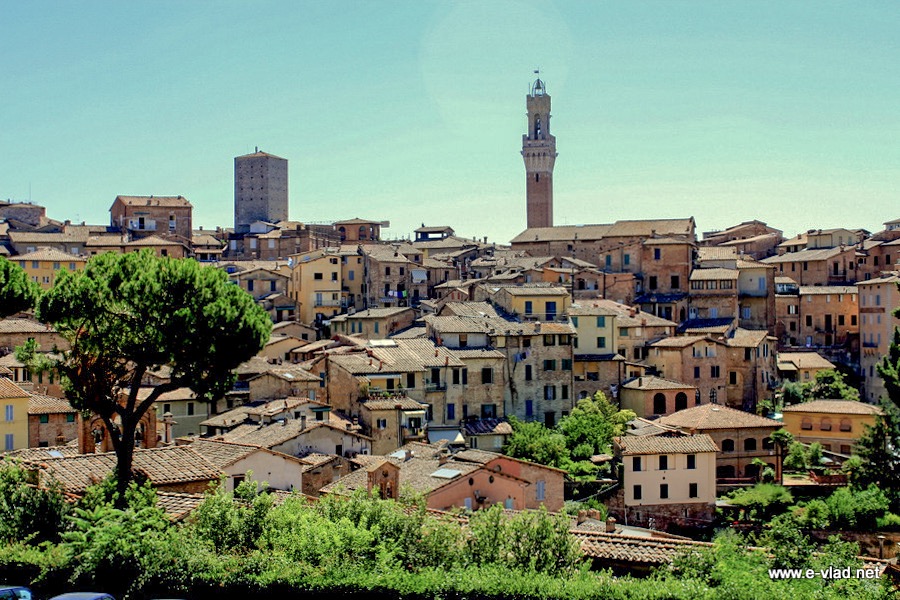 Take a scenic walk down a long staircase and past the historic Fontebranda fountain on your way to the next site. The Santuario di Santa Caterina di Siena is the historic home of the Benincasi family and the birthplace of Saint Catherine. The house has been divided into loggias, chapels, and oratories, and now serves as a sanctuary for many pieces of art and historic objects related to Saint Catherine. Especially if you are interested in religious history, a visit to this sanctuary should be one of your top things to do in Siena Italy. 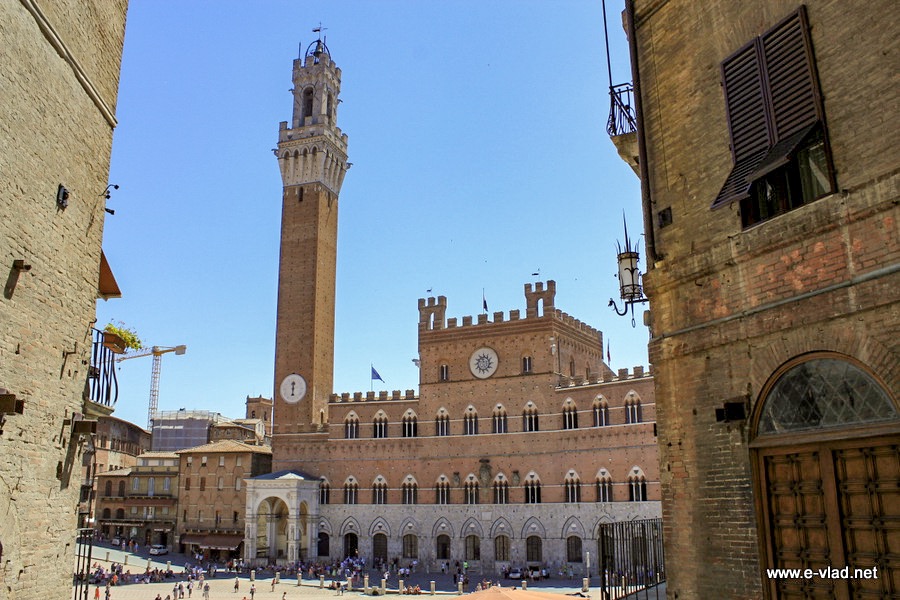 Siena, Italy – The impressive Palazzo Pubblico and Torre del Mangia seen from Via di Citta.
See my photos from Siena

The next stop is the Piazza del Campo, possibly the most famous place in Siena and one of the most well-known piazzas in Italy. The Piazza del Campo is a huge public square in the center of the city where numerous events take place, including the Palio di Siena, a twice-yearly horse race that occurs in July and August. In this race, ten horses and ten jockeys represent ten of Siena’s seventeen city wards. The races are only three laps of the piazza and usually last less than 90 seconds.

The piazza features many essential things to do in Siena, Italy, and some significant architectural sights. It is divided into nine sections of travertine bricks that represent the nine political leaders of Siena during the city’s medieval peak.

Many large piazzas in Italian cities have ties to the Roman empire, but the Piazza del Campo is said to be placed on the site of an ancient settlement of Etruscans. The Etruscans were the Iron Age civilization for whom Tuscany is tamed.

Located just outside of the Piazza del Campo, the Loggia Della Mercanzia is a must-see during your visit to Siena. This loggia is a shining example of Sienese architecture that unifies the Gothic and Renaissance styles. The ceilings inside the loggia feature stuccos and frescoes dating back to the 1500’s framed by picturesque arches and columns featuring statues of Saint Paul and Saint Peter by the sculptor Vecchietta. 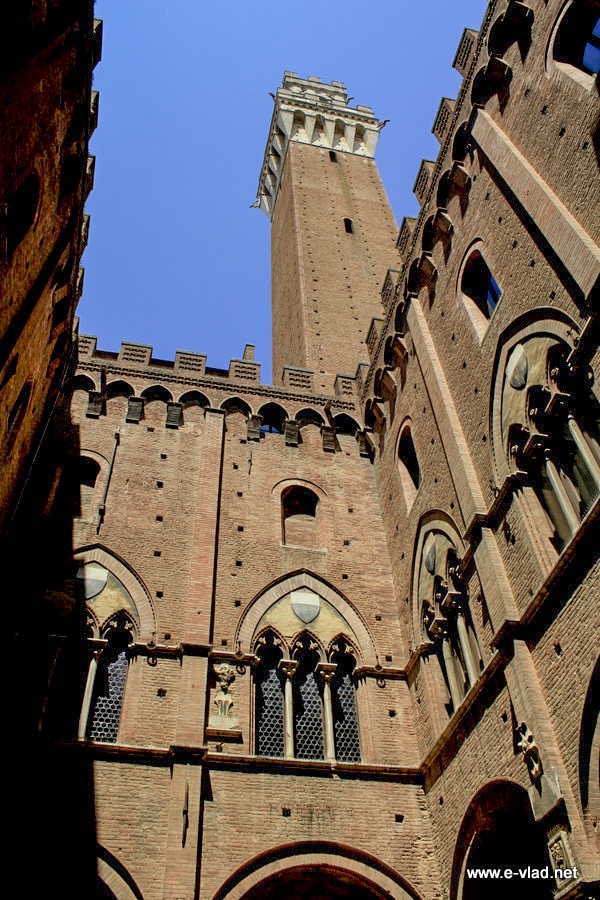 Touring historic architectural sites is one of the best things to do in Siena, Italy. While in the Piazza del Campo, you won’t be able to miss the Torre del Mangia.

This soaring tower is the second tallest secular tower in all of Italy, and it was built to be the exact same height as the Siena cathedral to symbolize the equality of church and state in the city. The top of the tower was designed and built by Lippo Memmi, a famous architect, between 1338 and 1348. The clock and bells were added to the tower in 1360. “Torre Del Mangia” literally translates to “Tower of the Eater”.

The tower was named for its first bell ringer Giovanni di Balduccio, who was nicknamed “Mangiaguadagni” or “Earnings Eater” due to his tendency to spend all of his money on good food. 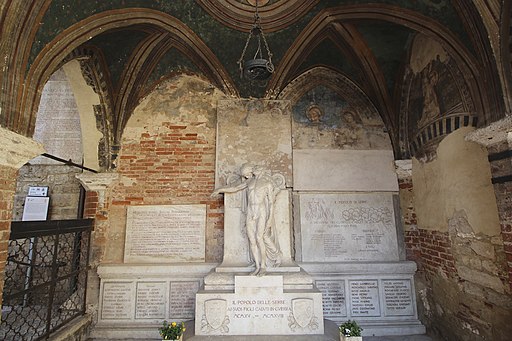 At the base of the Torre del Mangia, you will see a beautiful structure of white marble arches called the Cappella di Piazza. This small place of worship was constructed to thank the Virgin Mary for protecting the city of Siena during the Black Plague.

There was once a fresco above the altar painted by Il Sodomo, who also decorated parts of the Basilica Cateriniana di San Domenico. The fresco became damaged over the years and is now preserved in the Museo Civico – if you’d like to see it, just enter the first floor of the Palazzo Pubblico, which is right next to the Cappella di Piazza. The museum is right inside, and it is another one of our most recommended things to do in Siena Italy. 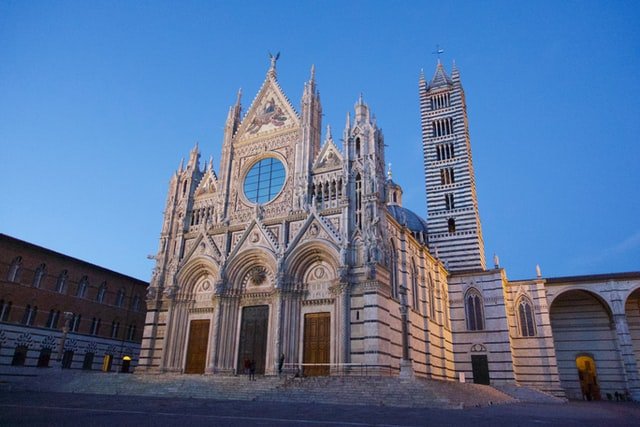 Many of the most fascinating and educational things to do in Siena, Italy are just a few minutes walk from one another. A couple of blocks from the Piazza del Campo is the Piazza del Duomo, where you can take in the gorgeous black and white marble exterior of the Siena Cathedral. These contrasting stripes are a unique feature of Sienese architecture and you may notice them on other buildings around the city.

In this piazza, you can visit the Tourist Information Office to ask questions about Siena’s culture and history. Please note that the tourist office has limited hours on Saturdays, Sundays, and holidays. Also located in this piazza is Santa Maria della Scala, a historic civic hospital that is now a museum. 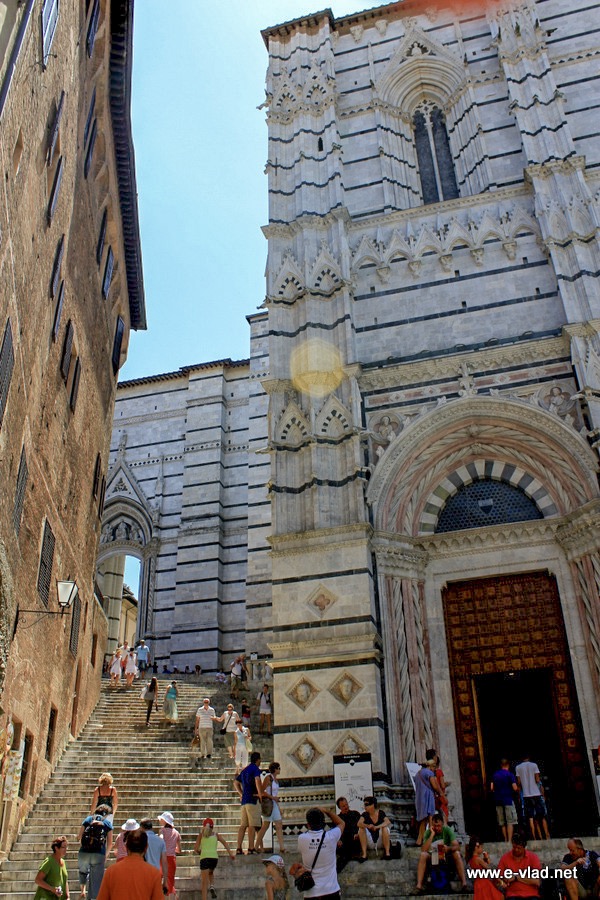 Siena, Italy – The stairs and entrance to the Baptistry.
See my photos from Siena

Around the corner from the Siena Cathedral is the Battistero di San Giovanni, a baptistery that features a Gothic facade with distinct marble patterns. Inside, you will find many notable works of art. The baptismal font features decorations by Lorenzo Ghiberti, famous for creating the magnificent golden doors to the Florence baptistery that are known as the Gates of Paradise.

Another panel on the font depicts the feast of Herod and was created by Donatello, one of Italy’s best known sculptors. The interior is decorated with frescoes in the Sienese style, gold, and more stunning marble to echo the exterior. If you are a fan of Italian art, a visit to the Battistero di San Giovanni must be on your list of things to do in Siena, Italy. 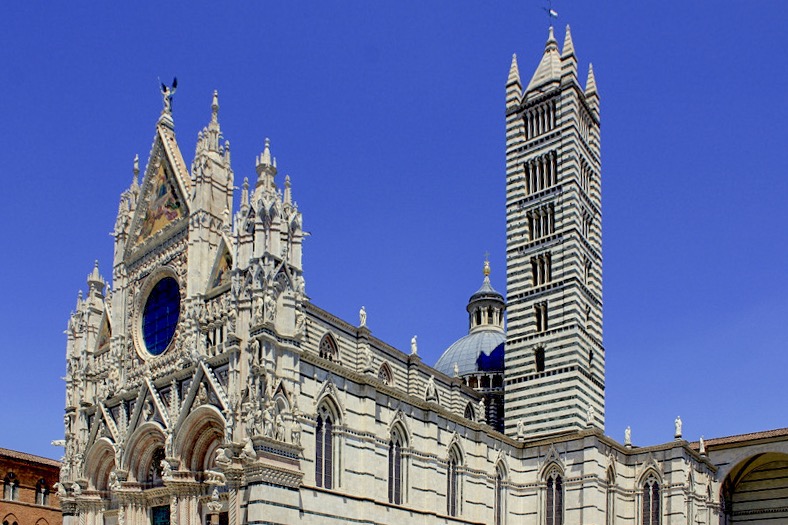 Siena, Italy – The amazing Duomo of Siena (Santa Maria Asunta) was completed in 1263.
See my photos from Siena

The Siena Cathedral is known as the “Duomo di Siena” and as the “Cattedrale Metropolitana di Santa Maria Assunta”, or the “Metropolitan Cathedral of Saint Mary of the Assumption”. Many major Gothic and Baroque cathedrals in Italy feature a large dome above the crossing of the nave and transept (the long, central part of the cathedral and the smaller hallways off of each side near the back). This trend reportedly began in Florence when the architect Brunelleschi designed the massive, iconic dome of Santa Maria del Fiore. For this reason, you will notice many Italians and tourists refer to the main cathedrals in their cities as simply “il Duomo”, or “the dome”. 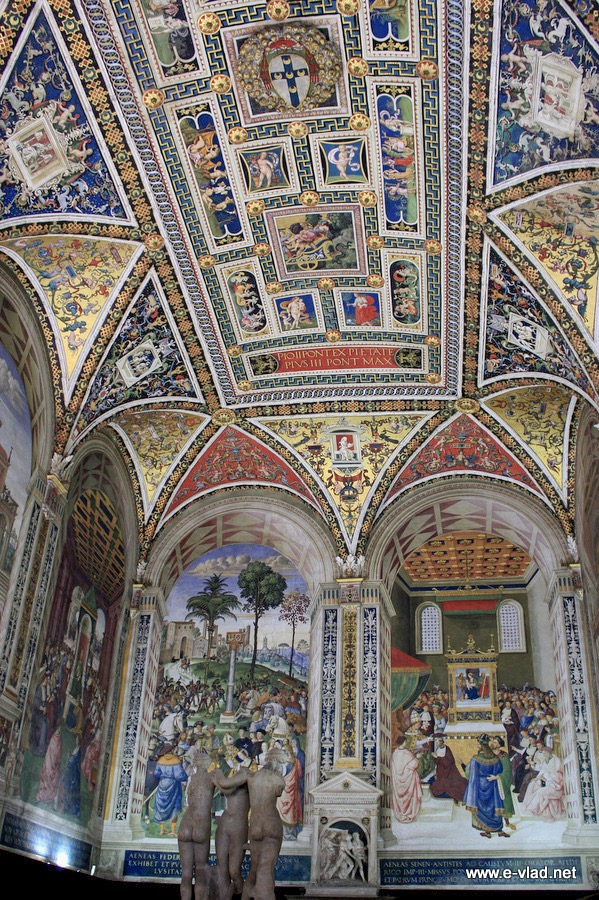 Siena, Italy – Beautiful ceiling and frescoes inside the Piccolomini Library of the Duomo.
See my photos from Siena

One of the first things you’ll notice about the Duomo is the striped black and white marble that decorates both exterior and interior walls and columns. Black and white are symbolic colors of the founding of Siena and can be seen throughout the city. Legend has it that Siena was founded by the brothers Senius and Aschius, who themselves were the sons of Remus, one of the two founders of Rome. During a deadly conflict between Remus and his brother Romulus, Senius and Aschius fled the city on horseback – one horse was black and the other was white. These colors even appear on Siena’s coat of arms.

The Duomo is built in the Tuscan Romanesque architectural style. Countless works of art decorate the interior from some of the biggest names in Italian art – Pisano, Donatello, Ghiberti, Bernini, and Michelangelo. Visiting this cathedral is one of the most impressive things to do in Siena Italy.

Finally, wrap up your list of things to do in Siena Italy with a visit to one more historically significant piazza. The architecture in Piazza Salimbeni may look similar to the rest of Siena, but it is actually much more modern.

The piazza is flanked by three palaces with façades constructed during the nineteenth century in a neo-Gothic style. The palaces are Palazzo Tantucci, Palazzo Salimbeni, and Palazzo Spannocchi. Banca Monte de Paschi di Siena originated in Palazzo Salimbeni.

This bank is one of the two oldest banks in the world and now operates out of all three palaces in Piazza Salimbeni. There is a single statue in the center of the piazza of Sallustio Bandini, an Italian archdeacon and economist.

Is is Worth Visiting Siena Italy?

Absolutely! The amazing history and beautiful architecture helped us enjoy our visit very much. Our kids had a great time running around Piazza del Campo and the large water fountain. We ate lots of gelato and visited beautiful museums. Siena is worth your effort to travel there, especially if you visit Florence or other places in Tuscany. Plan to allocate at least one entire day so you have time to enjoy the best things to do in Siena Italy.