Home
Europe
England
15 Best Places to Visit in the Cotswolds 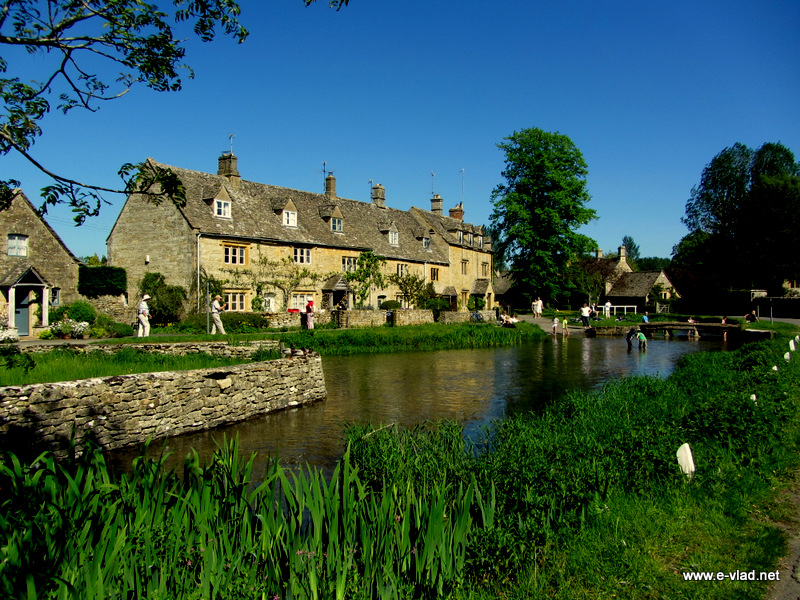 The Cotswolds are England’s most beautiful area. Rolling hills hide tiny quaint villages with houses made from the local yellowish color stone. Small, peaceful streams flow thorough these idyllic places creating unbelievably quaint settings. I believe that everyone coming to visit London should plan on taking time to visit the Cotswolds. Come along with me as we explore the best places to see in the Cotswolds.

The Cotswolds span a large area of rolling hills and villages in the West of England. This beautiful area spreads from Bath in the south to Stratford-upon-Avon in the north, with Oxford midway to the east. Let’s find the best places to visit in the Cotswolds by taking a trip from Bath to Stratford upon Avon through this Area of Outstanding Natural Beauty (AONB) as the English officially call it.

Southern Cotswolds: Between Bath and Oxford 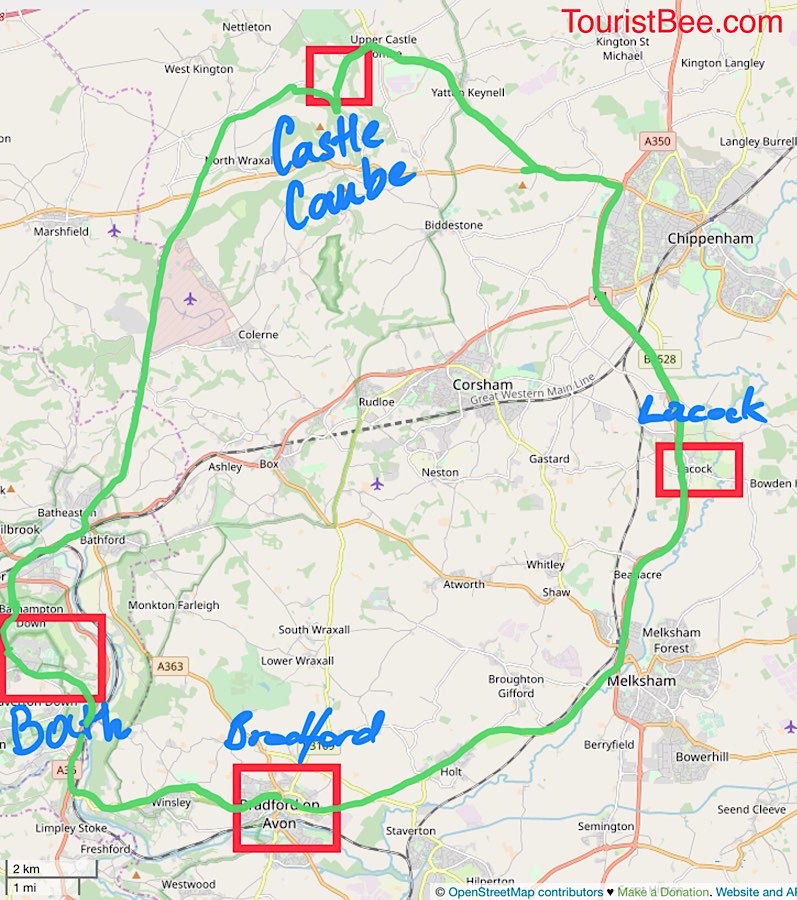 Driving north east from Bath, you will start encountering the famous beautiful and quaint villages of the Cotswolds. Tucked among rolling hills, these tiny places take you far away from the busy nearby cities into a world of peaceful streams and fairies.
Let’s start exploring the Southern part of the Cotswolds first. 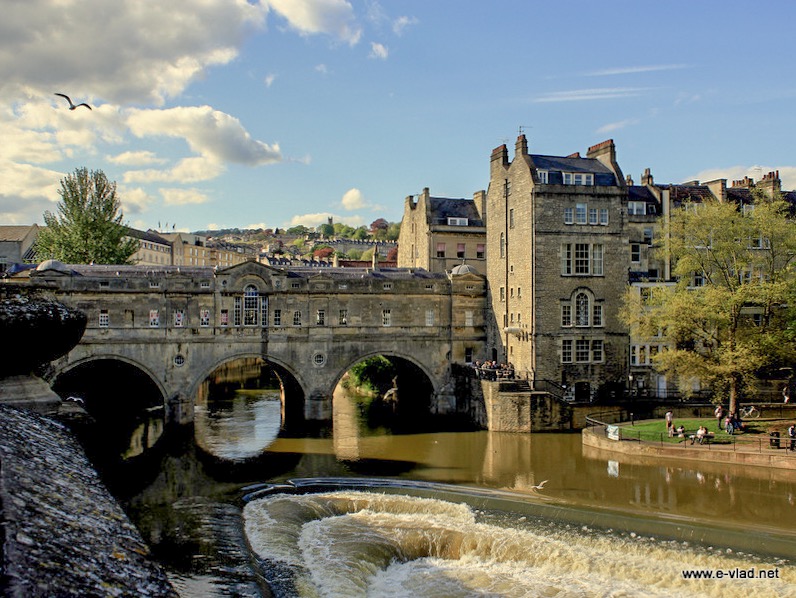 Bath is my favorite starting place for exploring the Cotswolds. However, Bath in itself is a beautiful city to visit, so make sure you don’t skip it. Spend time visiting Bath Abbey and the Roman Baths as well as the beautiful Royal Crescent.

There are many beautiful places to visit in the Cotswolds, and Bradford-on-Avon is the perfect place to begin your journey! After a short car ride from Bath, you’ll love all the opportunities to explore outdoor nature activities in this small town. Hire a bike to cycle around the glorious countryside, or a canoe to paddle through the town’s maze of sparkling canals. To stock up on souvenirs and road trip snacks, visit The Shambles (click link for exact map location), a historic street of shops that dates back to the middle ages.

Stop for a quick visit at the Bradford-on-Avon Museum. You will get great views of the Town Bridge and River Avon. 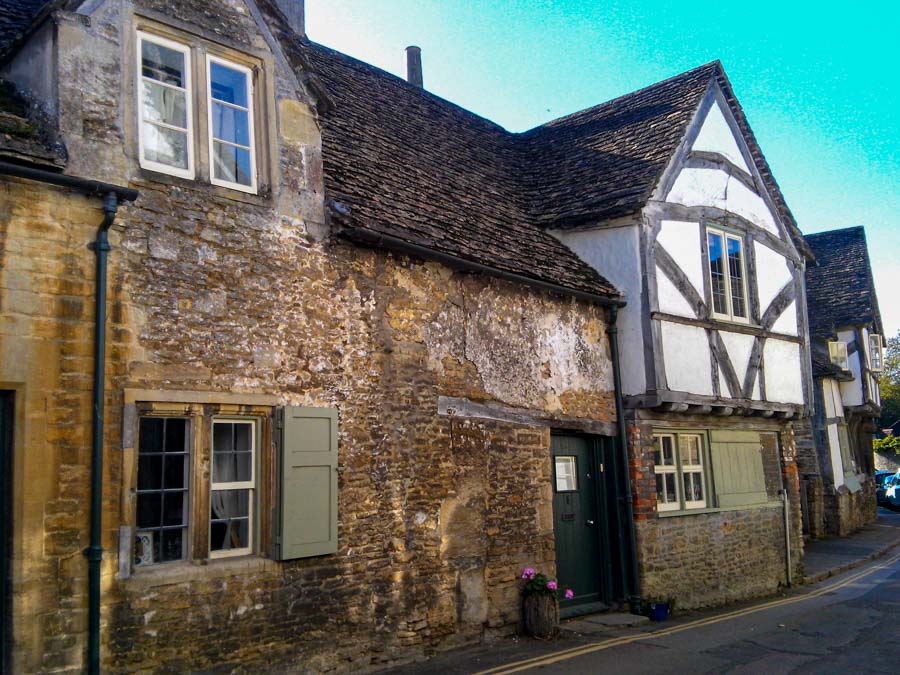 There is no shortage of things to do in the Cotswolds for film buffs. Especially, if you are a fan of Harry Potter, the beautiful and magical Lacock Abbey (click for map location) is the must-see place. The small village Lacock is the filming location for countless well-known movies and television shows, including Pride and Prejudice, Downton Abbey, and the Harry Potter series. The historic atmosphere of the village is so perfectly preserved that a substantial part of its income comes from hiring out filming locations like the Lackock Abbey and Cloisters.

Stop at the King John Hunting Lodge Tea Room for some sustenance and enjoy the historically significant location. King John was the original signer of the Magna Carta, a momentous civil rights document. 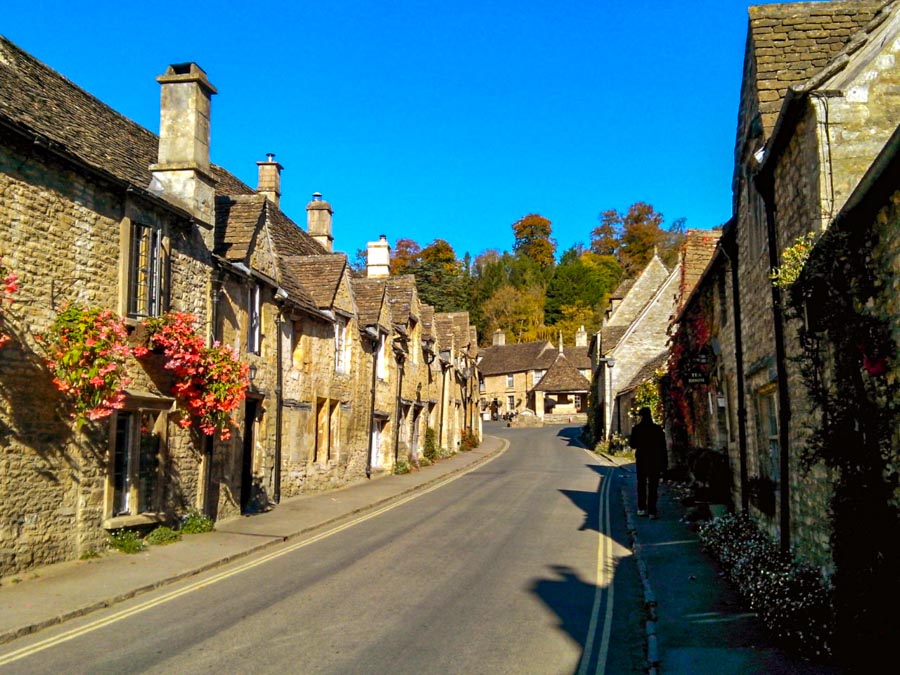 In Castle Combe you arrive in a dreamy village of honey colored stone cottages, the place you have adored from many famous movies like War Horse and Stardust. Old world charm abounds in Castle Combe, a tiny village along our driving tour. At the central market cross you may be lucky enough to stumble upon the village’s weekly market, where you can treat yourself to local delights. Have a pint in one of the village’s classic English pubs, or splurge on a Michelin-starred meal at The Bybrook, a restaurant in the luxury hotel Manor House.

You’ll never spend too long wondering what to do in the Cotswolds because beautiful villages like Castle Combe appear around every corner.

While you can find impressive architecture all over the Cotswolds, you won’t want to miss Saint Mary’s Church in Fairford. This church boasts massive, colorful windows that are some of the most well-preserved medieval stained glass in the entire country. For more recent history of the area, you can visit RAF Fairford, an airfield that served the British pilots who were instrumental in the success of D-Day at the beaches of Normandy during World War II.

Northern Cotswolds: Between Oxford and Stratford 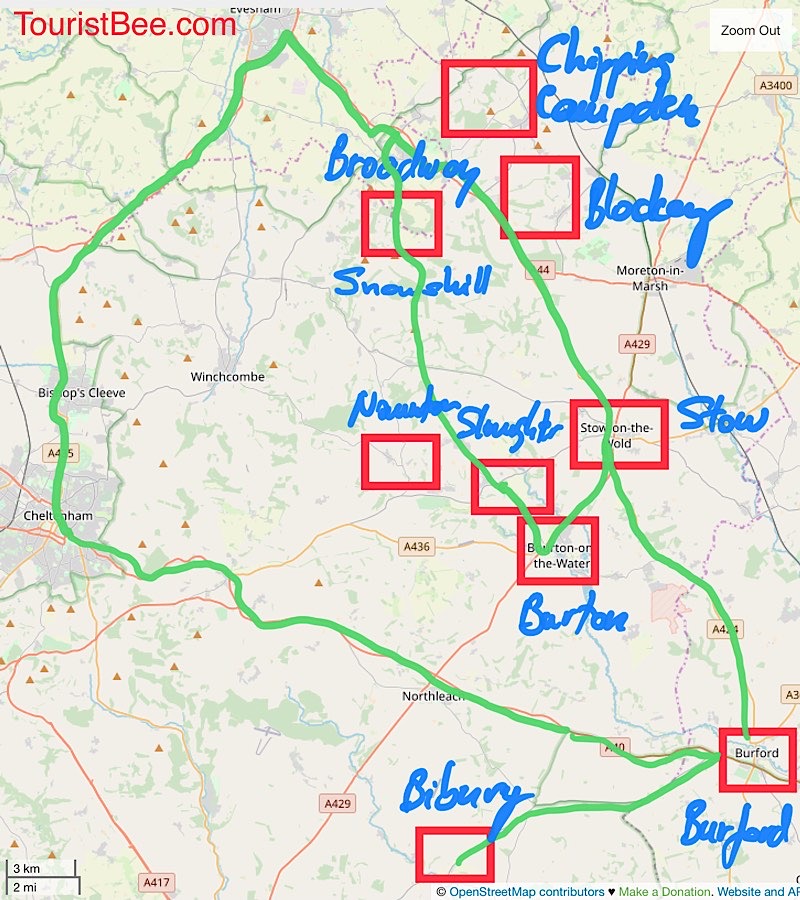 As we’re approaching Oxford on the east, we come into the Northern section of the Cotswolds. While this separation is purely artificial, the Northern Cotswolds area is filled with fairy tale villages. Let’s continue our trip north towards Stratford upon Avon through the Cotswolds.

Bibury transports you into the past at the first sight of the historic row houses that line every street. Artist and revolutionary socialist William Morris called Bibury, “The most beautiful village in England”. You must keep it on your list of things to do in the Cotswolds! You may recognize the picturesque Arlington Row (click link for map location), a line of gorgeous stone houses, from the movies Stardust or Bridget Jones’ Diary. 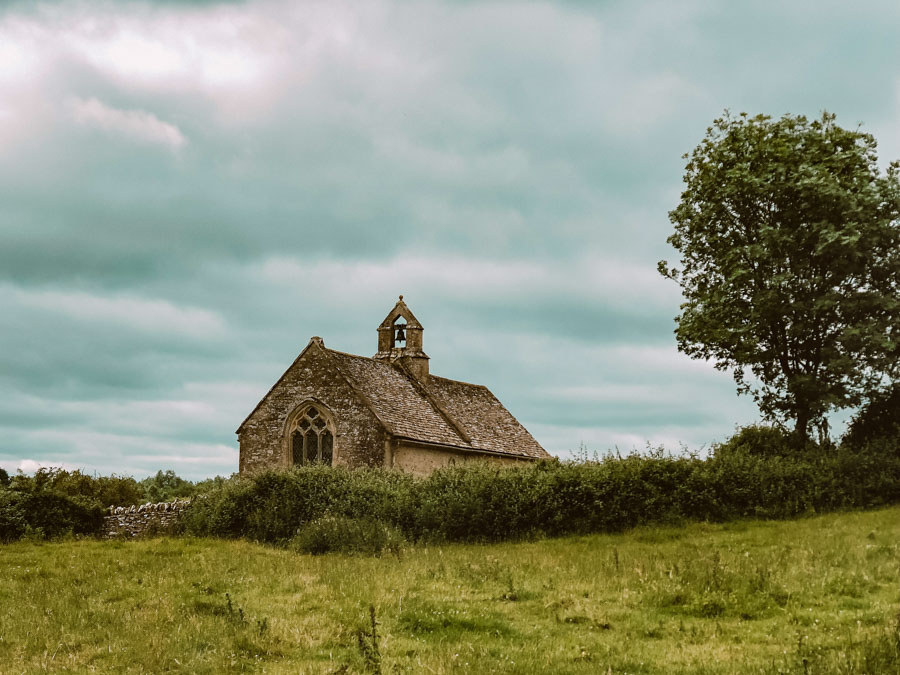 Burford, the gateway to the Cotswolds, features medieval limestone buildings that line rolling green hills. If have children traveling with you and you’re planning what to do in the Cotswolds, this area will be especially attractive to you – nearby sites include the Cotswold Wildlife Park and Gardens and the Crocodiles of the World Zoo. Here, you can see 17 of the world’s 24 species of crocodiles, as well as a variety of other reptiles and mammals.

If you are spending more days in the Cotswolds, you may also want to plan a stop at Blenheim Palace. This is a huge English Baroque-style mansion that was constructed for the Duke and Duchess of Marlborough by Queen Anne.

7. Burton on the Water 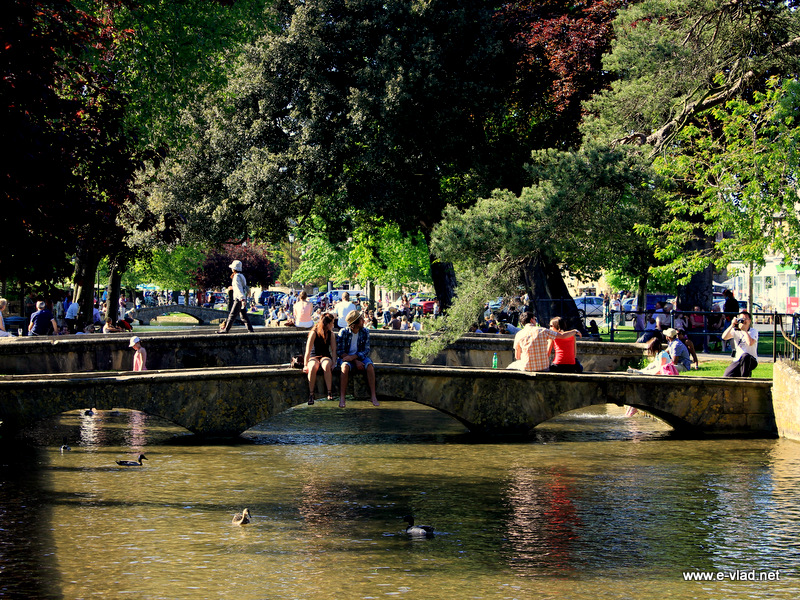 Bourton on the Water, England – Beautiful low stone bridges across the Windrush River
See my photos from Northern Cotswolds

Burton on the Water,  known as “Venice of the Cotswolds” has lots of attractions to discover. The Cotswolds Motoring Museum & Toy Collection is perfect for entertaining children while the Smiths of Bourton (click for map location) offers a quaint tearoom experience. You can also stop for a fresh pint at the Cotswold Brewing Company and explore fine fragrances at the Cotswold Perfumery. Our favorite experience was the pretty waterside views, bridges and walks along the peaceful River Windrush. 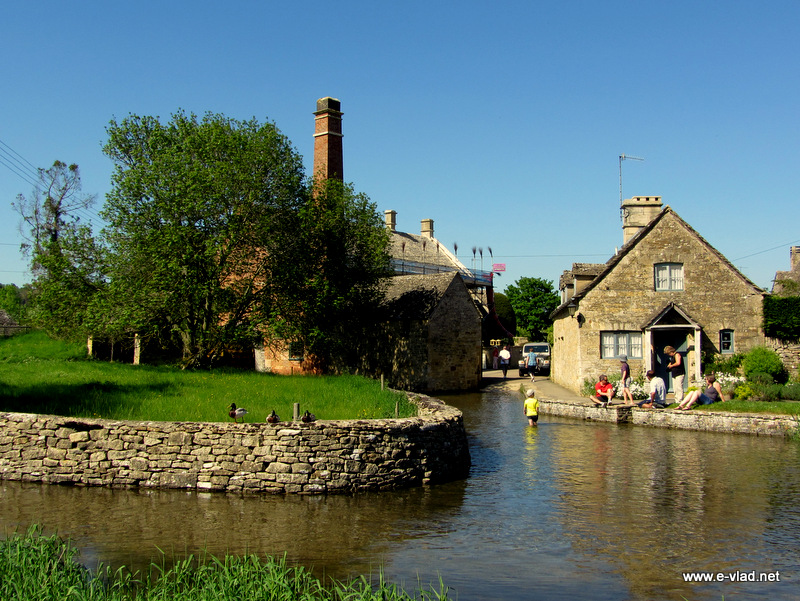 Lower Slaughter, England – The bend in River Eye and the water mill chimney.
See my photos from Northern Cotswolds

The village Lower Slaughter has been inhabited for over 1,000 years, making it one of the most historic places to visit in the Cotswolds. The name of this village may sound a little ominous, owing to its Old English meaning, but the village is actually beautiful and charming, with the sight of the Old Mill and the sleepy River Eye.

There are many gorgeous nature walks adjacent to the village that you can explore, as well as the old mill which now houses a museum and a cafe.

Upper Slaughter, England – A small bridge crossing over River Eye going up the hill to the church.
See my photos from Northern Cotswolds

Upper Slaughter is one of very few Doubly Thankful Villages – villages which lost no soldiers during World War I or II. While you’re in the area and have planned to spend a few days, consider visiting Sudeley Castle, a stately building that is surrounded by the expansive green hills which make it one of the loveliest places to visit in the Cotswolds. 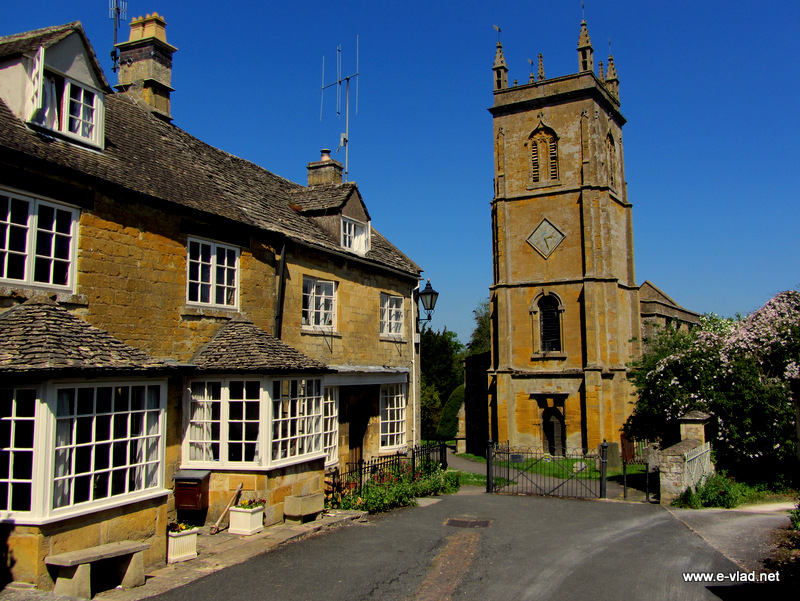 Blockley is one of the larger villages in the Cotswolds, and it was once the center of the silk industry in England. There are more things to do in the Cotswolds for the outdoorsy types on your trip near Blockley. Visit the Cotswold Falconry Center to learn about many different types of birds, or Cotswold Archery to practice your aim. 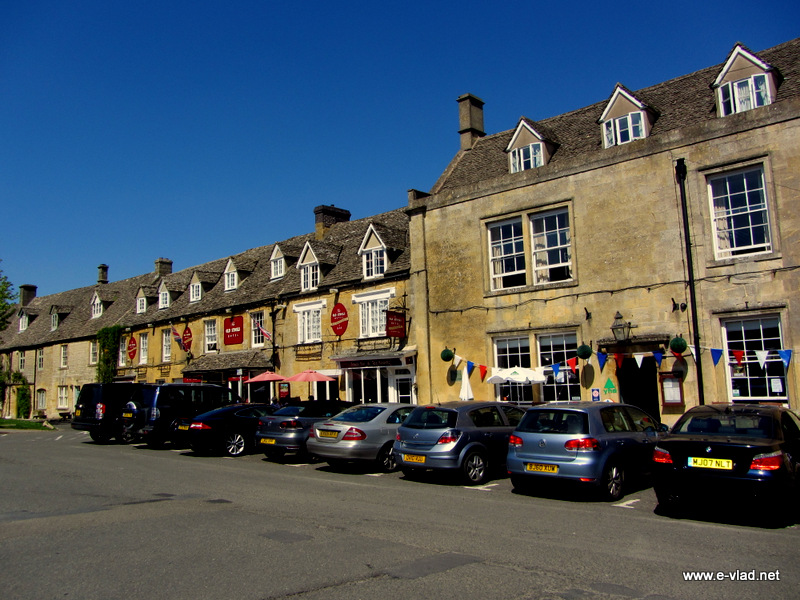 Stow-on-the-Wold is a market town that was once the epicenter of sheep sales at the peak of the Cotswolds’ wool industry. Today, it is known for its proliferation of antique shops and the Cricket Museum. During your visit you can pay your respects to John Entwhistle, the bass guitarist of The Who, who is buried at St. Edward’s Church.

Showshill, England – Beautiful view of the gate to the church yard with stone houses in the background.
See my photos from Northern Cotswolds

Snowshill is one of the smallest places to visit in the Cotswolds, with a population of under 200 people. Archaeologists discovered evidence of settlements in Snowshill as early as the Bronze Age. Discover the nearby lavender fields, which are overrun with fragrant purple blooms, and pay a visit to Snowshill Manor, an eccentric home-turned-museum with a unique collection of art, furniture, and toys.

Stanton, England – Small cottage on the hill.
See my photos from Northern Cotswolds

Almost all of the buildings in Stanton are made of Cotswold stone, a type of limestone that you will see everywhere you visit in the Cotswolds. Some buildings still have thatched roofs, and there is a winding high street with many old homes and shops along it. Make your way to the Mount Inn, an inn and restaurant at the top of a hill in this village that offers stunning views of the surrounding countryside. 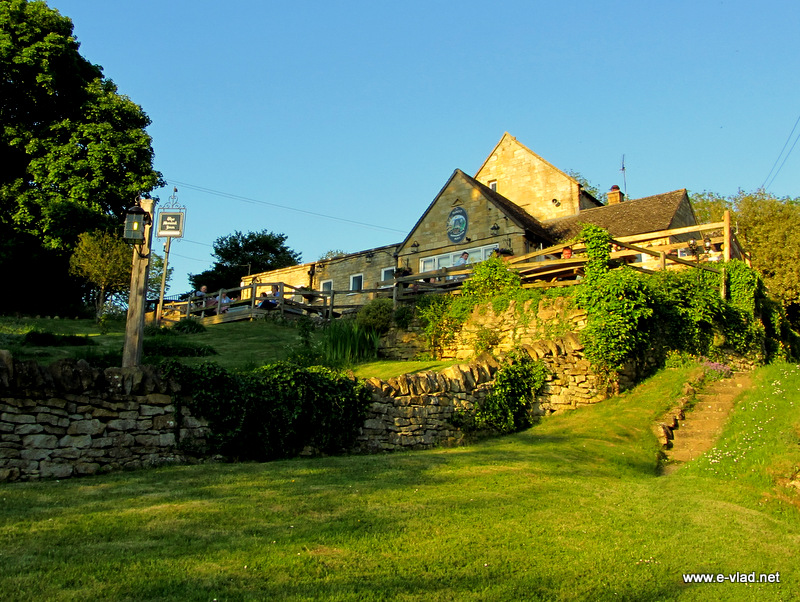 Stanton, England – The Mount Inn at the end of High Street.
See my photos from Northern Cotswolds

The historical origins of Broadway are uncertain, but it is now one of the largest and most bustling places to visit in the Cotswolds. The village is associated with the Arts and Crafts movement of the late 19th century, and appears in paintings by many artists of the time, including John Singer Sargent. Explore the Gordon Russell Museum to see some artisanal furniture, or climb Broadway hill to take in the views from the highest point in the northern Cotswolds. Broadway is also home to one of the longest High Streets in England, with plenty of shops and restaurants. 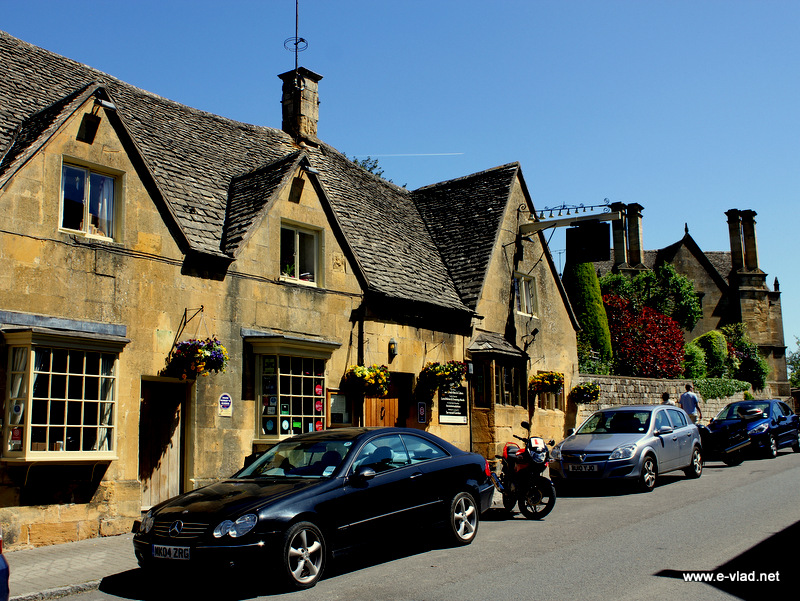 Famous author Graham Greene chose Chipping Campden as his home for a time during the 1930’s, likely because it is one of the most rich and charming places to visit in the Cotswolds. Packed with historical architecture and community events, you will always find something exciting to do or see in Chipping Campden. The town has hosted its own Olimpick Games since the 1600’s, which are still held every summer. There are hundreds of historic buildings in the relatively small village, which you can explore on foot or in your car.

End in Stratford upon Avon 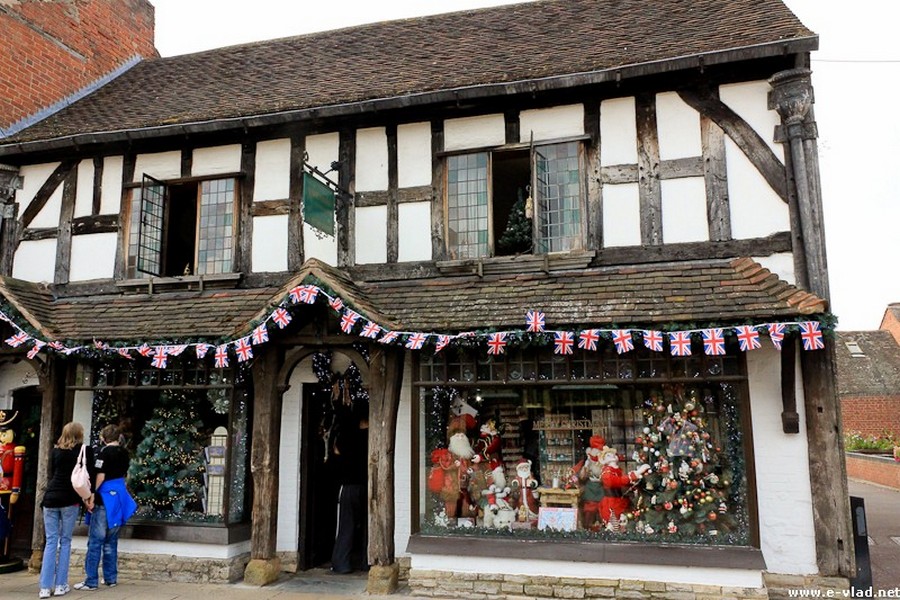 Stratford-upon-Avon is a beautiful place to visit and it is an amazing spot to end our trip through the Cotswolds. The birthplace of Shakespeare, Stratford is one of my favorite English towns to visit.

Is it Worth Visiting the Cotswolds?

Absolutely yes! In fact, the Cotswolds have become one of my favorite day trips from London. We have made it to the end of our road trip from Bath to Stratford upon Avon through the Cotswolds. Even though we have rushed through some of the best places to see in the Cotswolds, we were able to get a beautiful glimpse into this Area of Outstanding Natural Beauty.

Plan Your Trip through the Cotswolds

Find budget hotels in the Cotswolds. There are lots of choices, but it all depends on your itinerary.