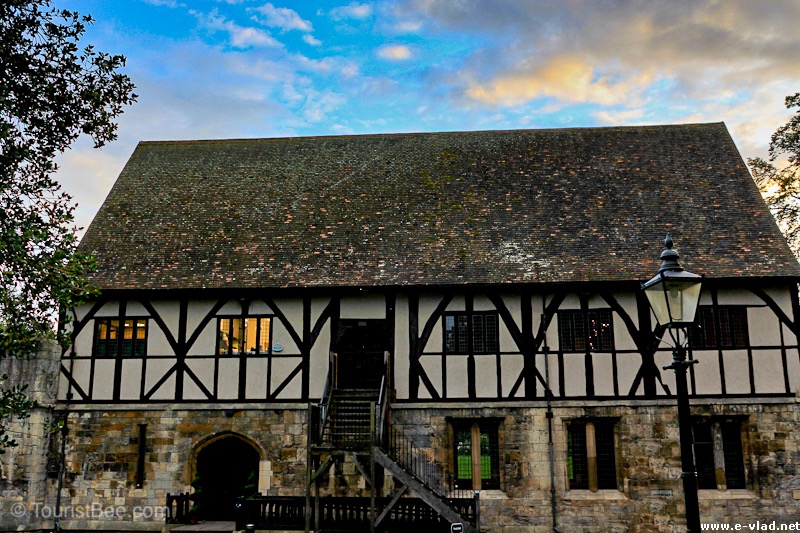 Once we visited York, it quickly became one of our favorite places for us in England. From the impressive York Cathedral to the beautiful medieval entry gates, York is packed with really cool things to see. In addition, our kids really enjoyed a couple of museums. So let’s explore my favorite York walking tour.

Come along with me as we take a walking tour of beautiful York UK. York is a very walkable city with a beautiful location. You can immerse youtself in the past as well as take leisurely strolls by the river. First time in York? Then let’s put on some comfortable walking shoes and go on my favorite self guided York walking tour.

Let me start with a summary of my favorite things to visit on your York walking tour. 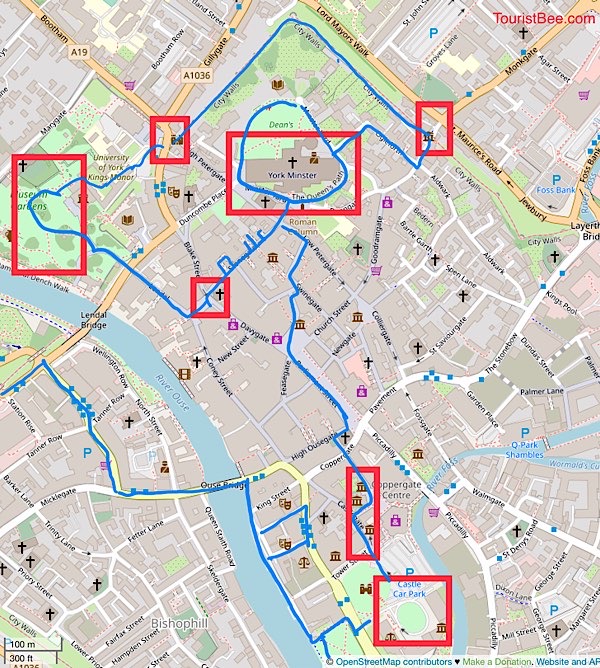 With our comfortable walking shoes on and our map in hand, let’s start our York walking tour. 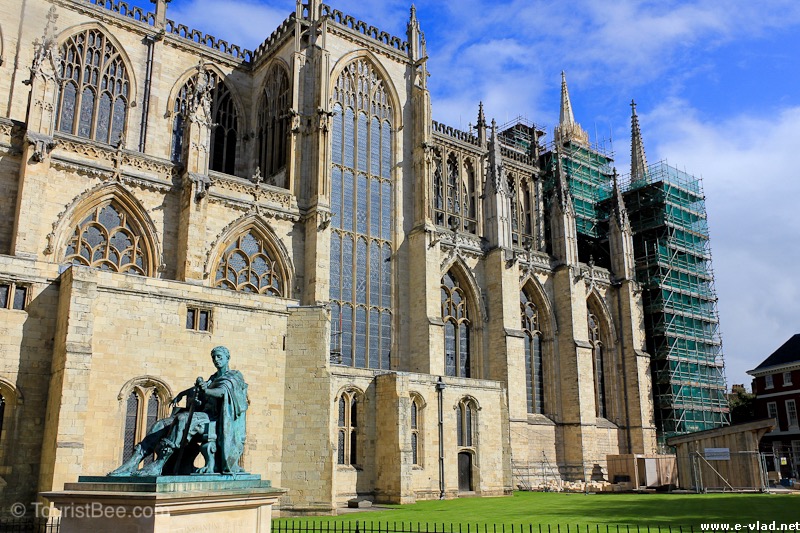 The imposing York Minster
See my photos from York

The first sight on our York walking tour is the magnificent York Minster, a sprawling 13th Century masterpiece. York Minster is the second largest Gothic cathedral in Northern Europe, and its stunning cross-shaped (or cruciform) floor plan is adorned by almost one hundred and thirty vibrant stained glass windows.
York Minster, along with other large churches like Ely Cathedral form the rich British Gothic architecture heritage.

Near the Southern walls of the cathedral, you will observe a statue of Roman Emperor Constantine, who was coronated here when York was a Roman settlement. 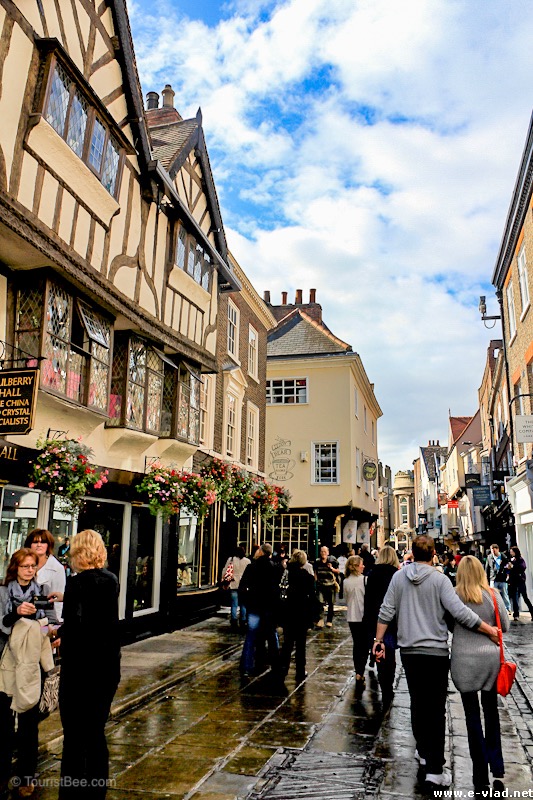 People walking on Stonegate street
See my photos from York

I love walking on Stonegate Street and it should be part of any Your walking tour! Charming old English buildings line up the street while a few old narrow and crooked alleyways that take you back into time. 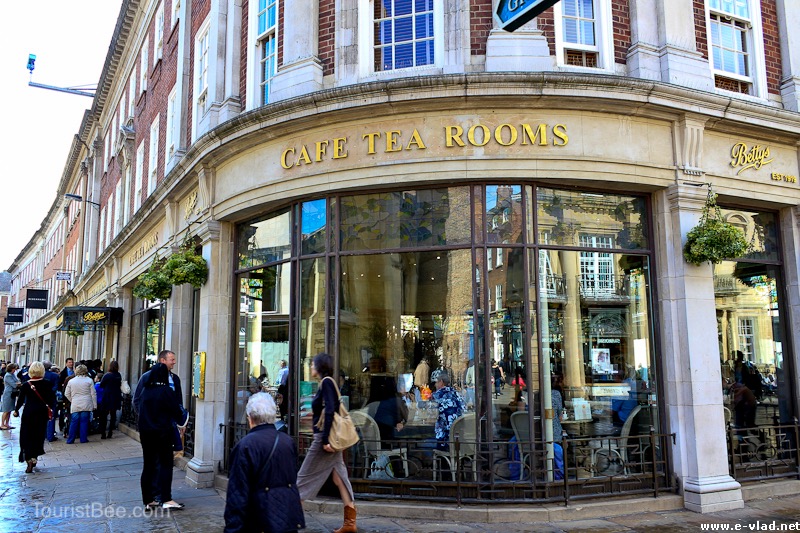 Tired of walking already? Not to worry, our next stop on our York walking tour is the famous Bettys Café Tea Rooms on St. Helen’s Square. We may pass by the Stonegate location of this cafe during our walk through the narrow cobblestone streets, but this location is much larger and more historic.
The café  opened in 1936 and features decorations inspired by the Queen Mary ocean liner (which is now a museum in Long Beach, California). 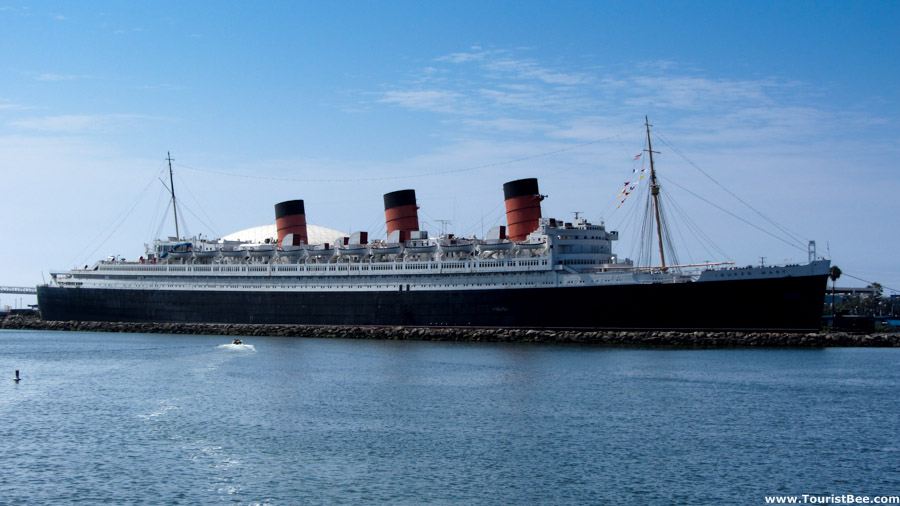 While the tea rooms can be crowded, you won’t regret waiting in the queue when you take your first sip of soothing tea and bite of a buttery scone with clotted cream and jam. 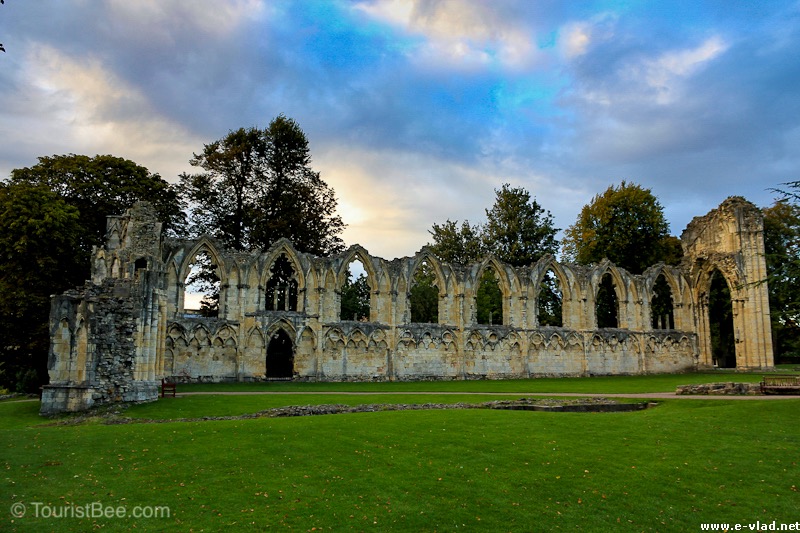 The ruins of St Mary’s Abbey in the Museum Gardens.
See my photos from York Museums

Next on our York walking tour, we visit the lush Museum Gardens, situated on the bank of the River Ouse. Explore the greenery as well as the historic sites in the gardens, including the remains of a Roman fort and the ruins of St. Mary’s Abbey. 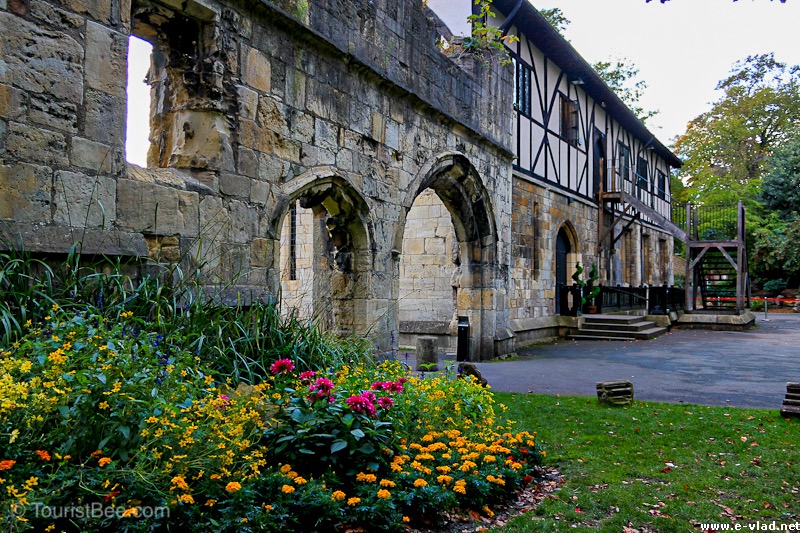 Ruins of entry gate to the side of The Hospitium inside Museum Gardens.
See my photos from York

The original Abbey was founded in 1055 and constructed on this site, with the gardens serving as its grounds. Now, only the North and West walls remain, but their charm extends throughout the garden. Take the opportunity to relax under the trees before we continue our walking tour of York, England. 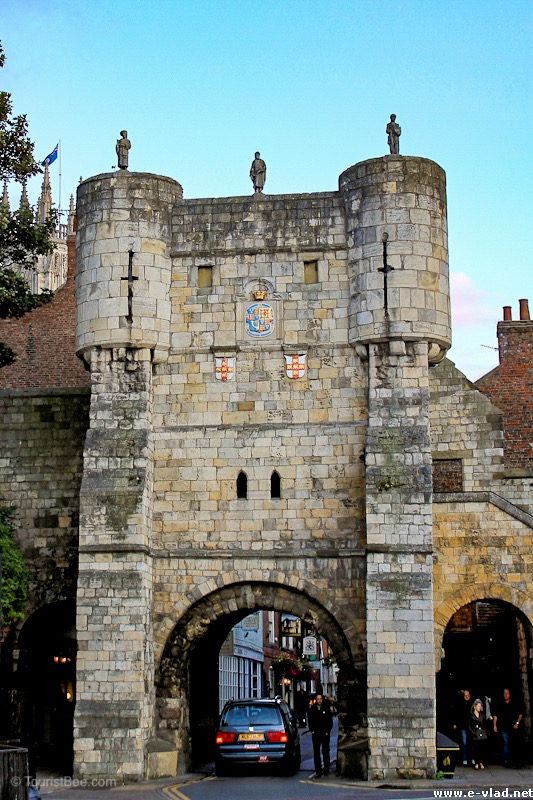 After we exit the park, we continue our York walking tour, as we catch our first glimpses of York’s historic city walls. Various walls surrounding the center of York have been erected and destroyed since the city’s founding in 71 C.E., and the ones we see today date back to the 12th-14th centuries. While only portions of the city walls remain, all of the city’s original entry gates or “Bars” have been preserved. The entry gates served as traffic control, defense, and tax collection stations. Shortly, we will arrive at Bootham Bar, and then we will continue our walking tour of York atop the historic city walls until we reach Monk Bar.
We will observe views of Dean’s Park along the way, which houses the York Minster Library. This charming walking path allows you to experience firsthand a piece of the city’s history that has been present for centuries. 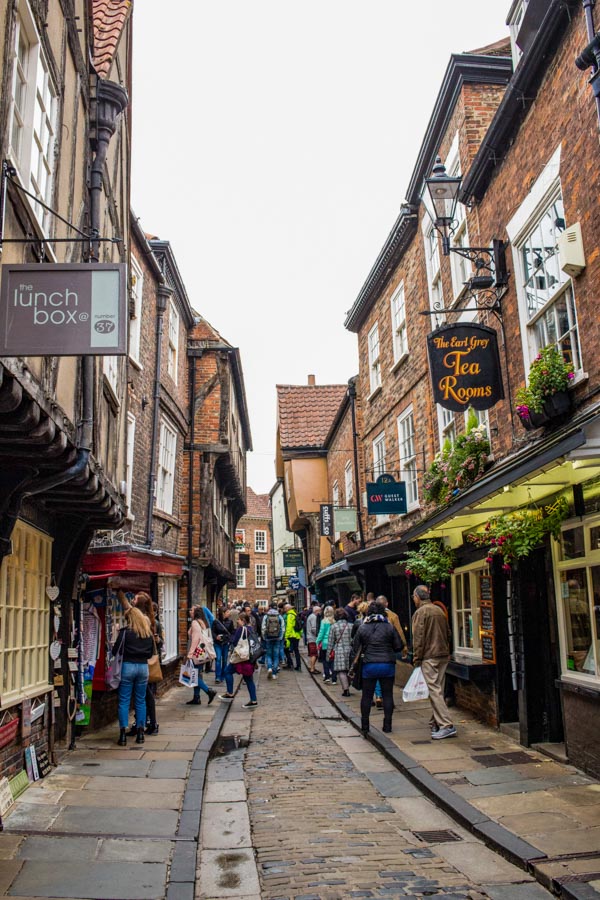 Walking down on Parliament Street towards York Castle, take a left turn on Newgate and then go right when you see the small sign for The Shambles. You will be instantly transported into old medieval times in York. This old cobbled street served as the inspiration for Harry Potter’s Diagon Alley as it still has old timber buildings dating from the 14th century. This is a must see York attraction and should be part of your York walking tour. 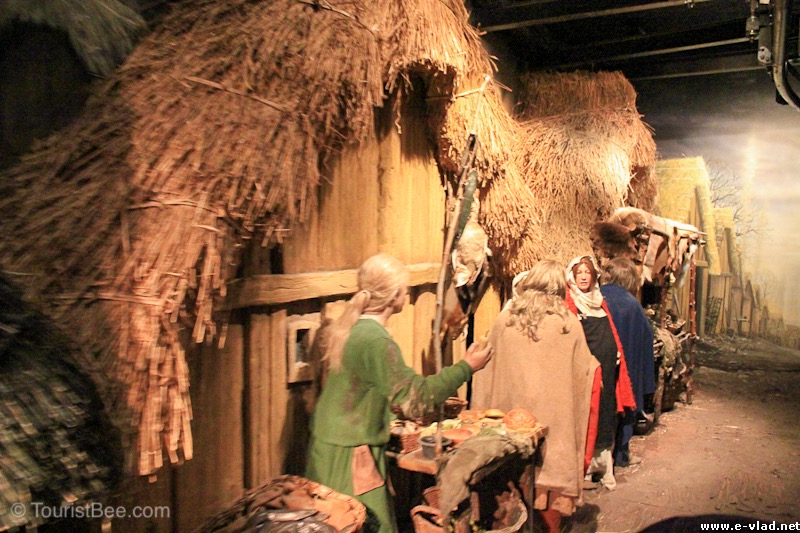 On the way to our next stop, you may want to pause to take a photo of the historic Fairfax House, a Georgian-style mansion with a gorgeous façade. Shortly, we will reach the Jorvik Viking Center, where you will be treated to a taste of Viking life in York.
This interactive experience is located on Coppergate Walk, a narrow pedestrian street with many shops and eateries to entice you – if you need a quick rest before or after the Viking Center, you will have plenty of delights to choose from. The Jorvik Viking Center recommends that you book your tickets online in advance for this exciting experience, as this allows you to have a guaranteed entry time. Don’t forget to arrive a few minutes early for a security screening. 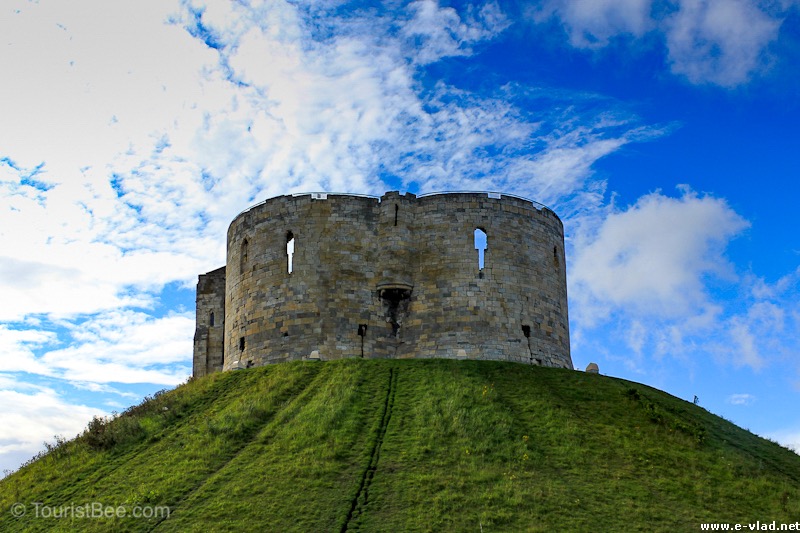 After brief walk, our York walking tour takes us to a peninsula at the intersection of the River Ouse and the River Foss – the geographic feature that made York an ideal location for an ancient Roman settlement.
This location was also perfect for William the Conqueror, who first constructed a castle on the promontory in 1068. Not only does the intersection of the rivers provide natural protection from invasion, it also provides increased potential for trade routes and travel throughout the rest of England. Clifford Tower, the original castle bailey, sits atop a grassy hill overlooking the nearby streets. You will find stretches of the original castle walls surrounding the York Castle Museum, which is housed in two former prison buildings.

If you have extra time, you can also walk atop York’s medieval wall on the southern side. Walking behind York Castle, shortly, we will arrive at the smaller Fishergate Bar, and then we will continue our walking tour of York atop the historic city walls until we reach Walmgate Bar. Walmgate Bar remains the only town gate in England to have a barbican, a type of reinforced defense tower. This charming walking path allows you to experience firsthand a piece of the city’s history that has been present for centuries. 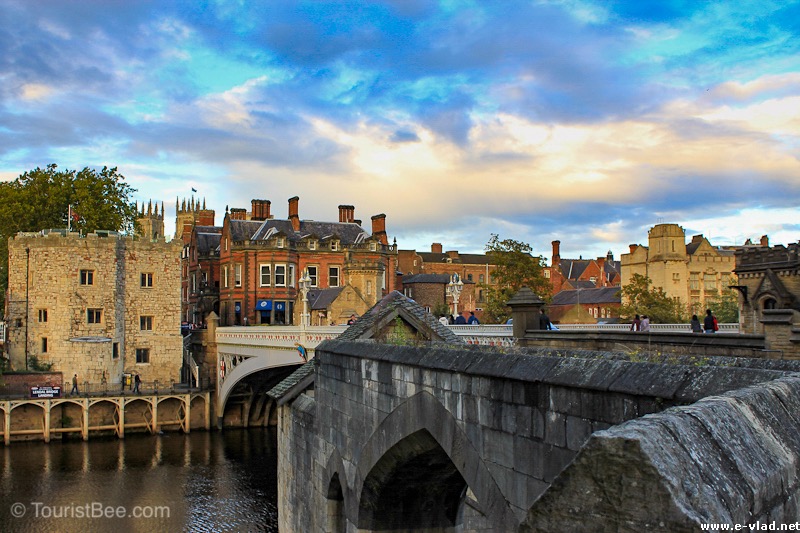 From York Castle, we continue our York walking tour by simply crossing the street and coming to the beautiful Tower Gardens city park. Depending on how much time you have, you can take a stroll on the beautiful tree lined walking path or simply rest on a bench overlooking the River Ouse.
Walking upriver and staying on the banks of River Ouse you can enjoy the hip riverfront area with lots of restaurants and beautiful views of the river. In addition, you can quickly walk up to the famous York Dungeon and visit this very popular attraction. 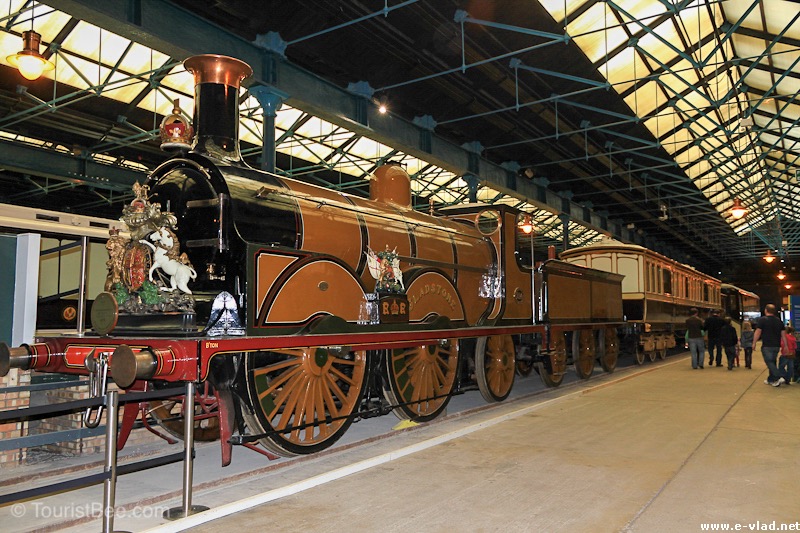 Beautiful steam engine and train cars on display at the National Railway Museum.
See my photos from York Museums

Finally, turn back to the River Ouse and take advantage of the city’s beautiful riverside walking paths to lead you to the final stop on our York walking tour. We arrive at the National Railway Museum, which is conveniently located by the train station if you are traveling out of the city after completing the walking tour.
Entry is free, and it is recommended that you leave at least one hour to fully explore what the museum has to offer. Objects on display at the museum include paintings, historic railway station benches and signs, and more. There is also a collection of unique locomotives, and if you plan ahead, you can even book a ride on a steam engine for £4 in advance.

Plan Your Own York Walking Tour

We spent an entire day in York and we loved it.  However, if you are in the planning stages of your trip to England, I suggest budgeting two days for visiting York. This way you can also enjoy the town a lot more, especially walking along the river.

Find budget hotels in York. With over 700 properties, you can easily find a place that suits your budget and travel style. You can stay very central by Monk Bar at Double Tree Hotel or in the charming Churchill Hotel conveniently located by Bootham Bar.

Book a local walking tour of York that will take you to most of York attractions. This is a beautifully conducted tour. You can also book a gorgeous afternoon tea river cruise.

Parking inside old town York is somewhat difficult.  If you have a car, my suggestion is to park at the York Castle parking area. If this area is full you can also try the nearby Coppergate Car Park.

Getting to York by train is the most convenient way to visit the city.  This is especially true, if you are coming from London, as the car ride will take you a very long time compared with the high speed train. Picking up the train in King’s Cross London station will put you in York in about 2 hours. Once in York, the train station is withing easy walking distance from most York attractions.

Is it York Worth Visiting?

Absolutely yes! If you plan on visiting England, York should be one of your destinations to visit. We found York to be charming and very interesting for visitors.