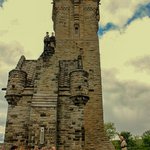 When we visited Stirling in Scotland, we didn’t expect so much history concentrated in such a small place. Every place around Castle Hill has been involved in every major event in Scottish history. Over the years, Stirling has remained the most prominent symbol of national identity. Come along with me as we explore the best things to do in Stirling Scotland.

As we were coming close to Stirling, we enjoyed driving through the beautiful countryside. The Wallace Monument gave us a beautiful view of the River Forth as it weaves its meandering way through the valley right below Stirling castle. Then we were ready for our waling tour of Stirling. Come along with me as we explore the best things to do in Stirling Scotland.

What to Expect When Visiting Stirling Scotland? 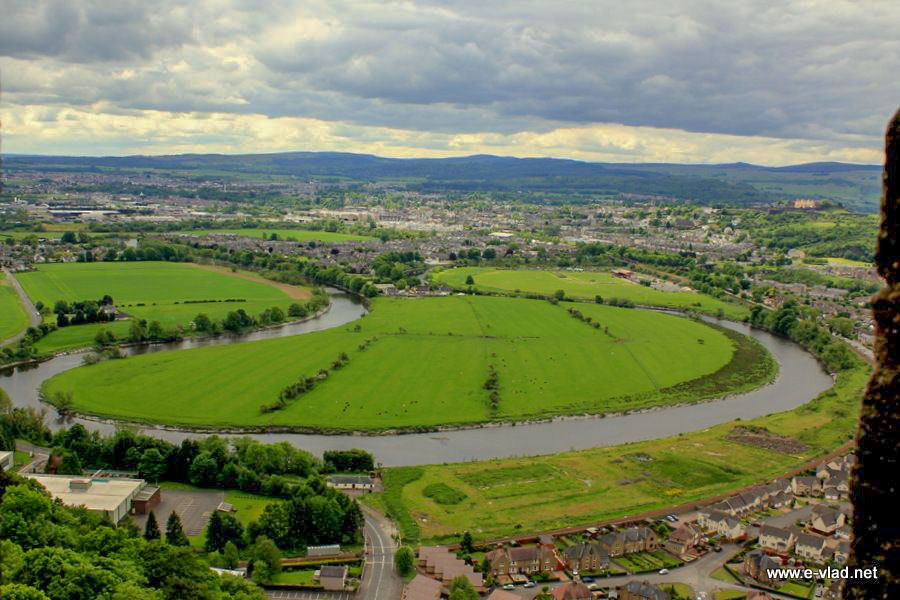 Amazing panorama of River Forth and the Battle of Stirling Bridge battlefield
See my photos from Stirling, Scotland

Stirling is a historical city and as such there are many old places to visit. We found Stirling delightful to walk through since it is much smaller than Edinburgh. Compared to St Andrews, we found Stirling to be smaller still with the historical center being very compact. Expect to walk but also expect not to be exhausted either. Come along with me on my walking tour of Stirling.

My Favorite Things to Do in Stirling Scotland

Trying to figure out what to see when you get to Stirling is a sure recipe for wasting your time. The more prepared you are beforehand the more you can actually enjoy every destination. Here are my favorite places to see in Stirling.
Visit the National Wallace Monument. It is located about 15 minutes drive from Stirling.
Stirling Castle provides sweeping views of the surrounding area. Make sure you take time to admire before visiting.
The Church of Holy Rude and its courtyard and cemetery. This 14th century church has witnessed the best moments in Scottish history.
Walk on King Street and it’s adjacent pedestrian area in the older part of Stirling.
Stop by the old Stirling Bridge and walk on it. 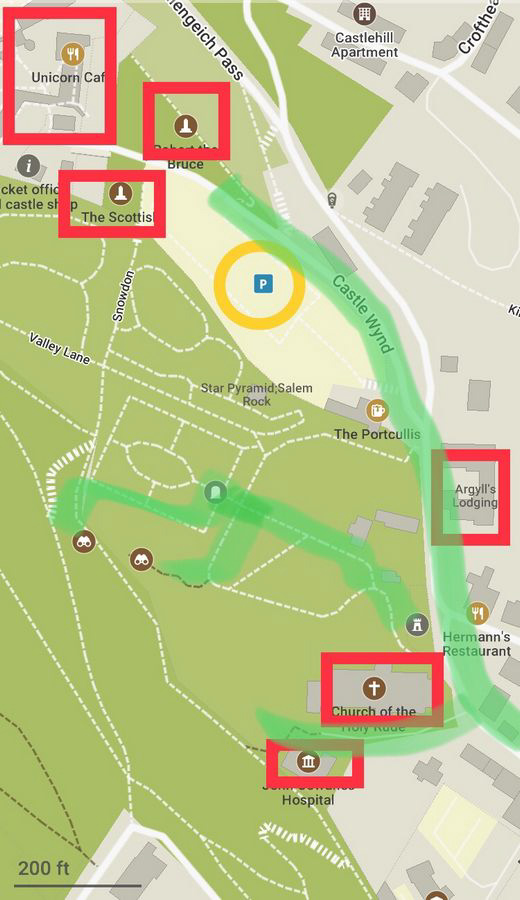 With our map in hand and comfortable shoes in our feet, let’s start our walking tour of Stirling together. 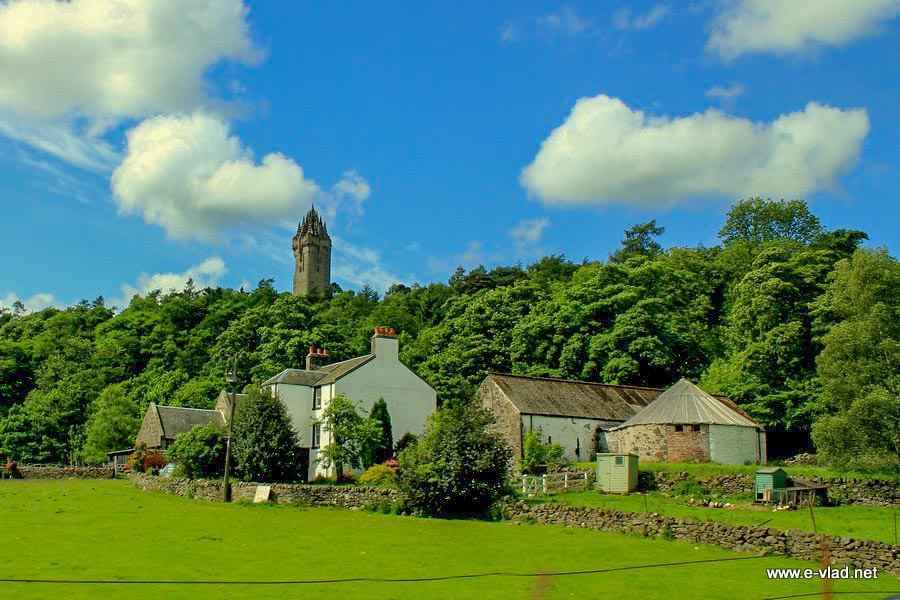 The National Wallace Monument near Stirling Scotland provides great views of the surrounding area
See my photos from Stirling, Scotland

Our first stop on our list of best things to do in Stirling Scotland, was right outside the town, on a hill top nearby. A very tall tower built at the end of the 19th century, the National Wallace Monument is a symbol of Scottish history. The monument overlooks a flat plain where the River Forth twists and turns as if it is not sure which way to go.
This valley is the site of the most famous battle in Scottish history: the battle of Stirling Bridge. The top of the tower provides amazing views of this beautiful area. The guide we had provided an entertaining lesson in Scottish history. 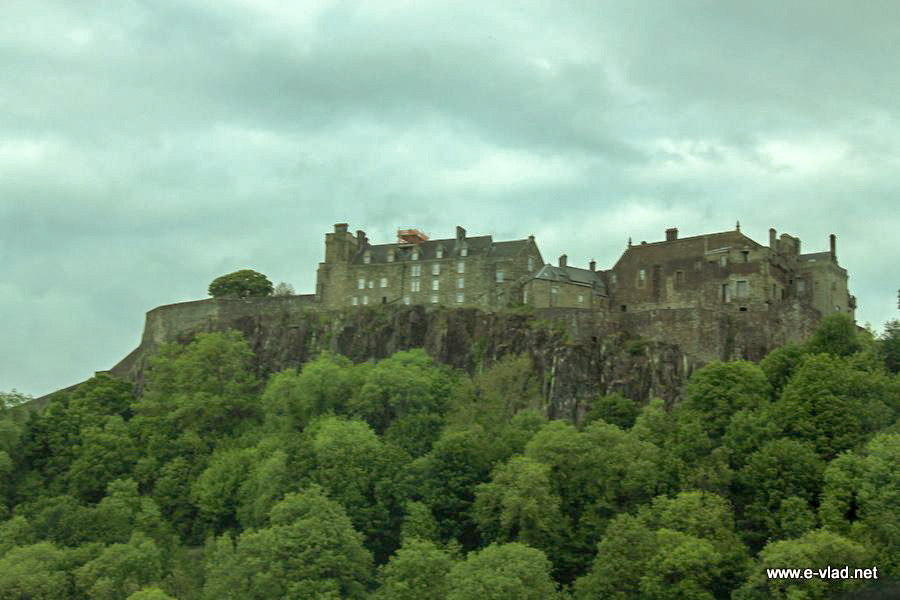 Stirling Castle is by far the most famous tourist attraction on our list of things to do in Stirling Scotland. Once we arrive in town, we naturally started our walking tour of Stirling with a stop at the Castle. Since we arrived at Stirling Castle later in the day and our kids were tired and cranky already. Instead of visiting the castle, which would have been very rushed and tiring, we decided to simply take in the views around the castle entrance.

The monuments dedicated to Robert the Bruce and the Unknown Soldier are great spots to admire the surroundings and take pictures. You can actually see the Wallace Monument in the distance.

3. The Church of Holy Rude 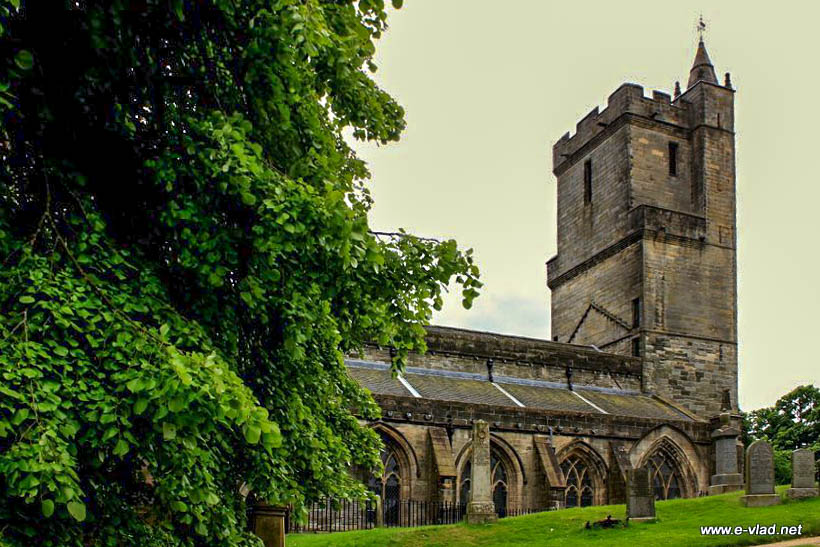 Strolling leisurely down Castle Hill, we continued our walking tour of Stirling with a stop at the amazing Church if Holy Rude. History just came to life here, both inside and outside the church. We could imagine John Knox preaching his fiery sermons inside this simple church. The Church of Holy Rude definitely makes my list of best things to do in Stirling Scotland, because it still bears marks of the many conflicts that passed through the area over the years.

It was here as well where King James was enthroned as king at the age of 13 months and served as the king of Scotland, England and Ireland bringing the prosperous Jacobean era in Great Britain. The church graveyard tells a detailed story of counts and earls, fortune and poverty as well as war and peace. We really enjoyed walking through the grassy paths behind Church of Holy Rude, back up Castle Hill.

4. Stroll Through the Center of Stirling 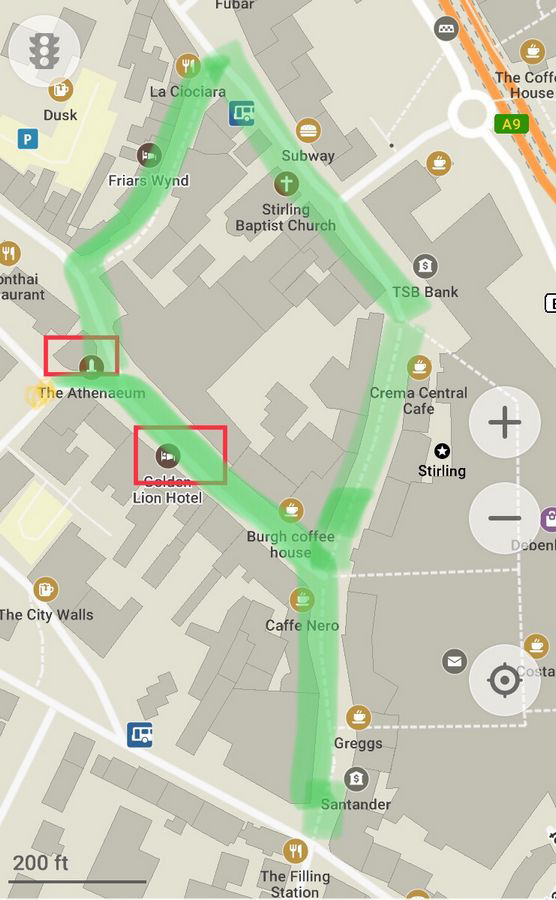 Any list of best things to do in Stirling Scotland would not be complete without a stroll through the old center of Stirling. The lower part of historical Stirling has a few pedestrian areas connected to the old King Street. As we walked down, older buildings are mixed with few modern bringing us to the present. A few pastries and some hot drinks helped us feel better after a tiring and wet day.

5. Walk on the Old Stirling Bridge 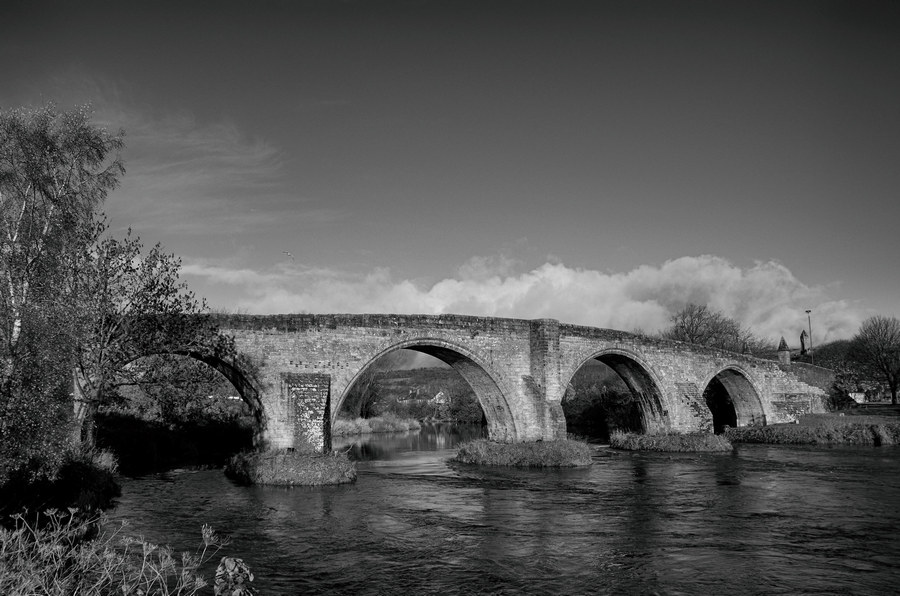 The Old Stirling Bridge, in its present form, was built in the 14th century replacing any previous wooden structures. Its present location is near the famous Stirling Bridge Battle and it puts you in the middle of Scottish history. As such, a simple stroll over the Old Stirling Bridge is definitely on my list of best things to do in Stirling Scotland. Unfortunately, we did not get a chance to walk on the old Bridge, but we only took a glimpse of it from the nearby bridge on our way back to Edinburgh.

You will find a small parking lot near the entrance to the Old Stirling Bridge. Once you park your car, you can simply walk over and stop for beautiful pictures.

Plan Your Trip to Stirling Scotland

Wasting time figuring out what to see and where to go is my worst fear when I travel. Therefore, I plan well beforehand. Below is my list of resources for you to plan all the details of your trip to Stirling.

Stirling Old Bridge location and parking. You can park your car right by the old Bridge on these coordinates: 56.128257(N), -3.938713(W).
Find affordable hotels in Stirling. With over 70 properties in Stirling you will be able to find a cozy place that fits your budget. If you plan to stay in Edinburgh and plan to explore Scotland from there, you can also search for best prices on Edinburgh hotels.
Find the best rates on car rentals in Scotland. You can save up to 30% when comparing all major car rental companies.

Is it Worth Visiting Stirling?

Being much smaller than Edinburgh, Stirling has a cozier feeling to it. History is deeply rooted here and it is clustered in a very small area which makes it very walkable. We really enjoyed our walking tour of Stirling.

5 Best Things to Do in Stirling Scotland is part of my series called: 4 days in Edinburgh