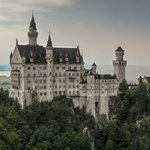 Bavaria, Germany has many majestic medieval castles. Unfortunately we have only been able to visit five of them. I love old castles. The older they are the more interesting they are for me. I love learning their history because a castle has the entire history of a town or even an entire region concentrated in one place. Behind a castle’s wall lots of people found refuge and shelter during times of war and found joy and entertainment during times of peace. All this tumultuous life is many times captured inside a castle’s museum. Read on about five beautiful castles in Bavaria, Germany.

Arguably, the most famous castle in the world is Neuschwanstein Castle in Bavaria, Germany. It is also the most beautiful of the castles in Bavaria. It sits on a tall hilltop at the foot of the Alps.

Neuschwanstein Castle comes at the end of the picturesque Romantic Road in the small village of Hohenschwangau near the town of Fussen. There are pictures everywhere on the internet, but when you get there and see the castle from the bottom of the hill, it does really look like a fairy tale.

You expect to see knights on their horses coming down the hill in their shining armor. Once you see it you stop wondering why Walt Disney used this castle as the inspiration behind Cinderella’s castle. 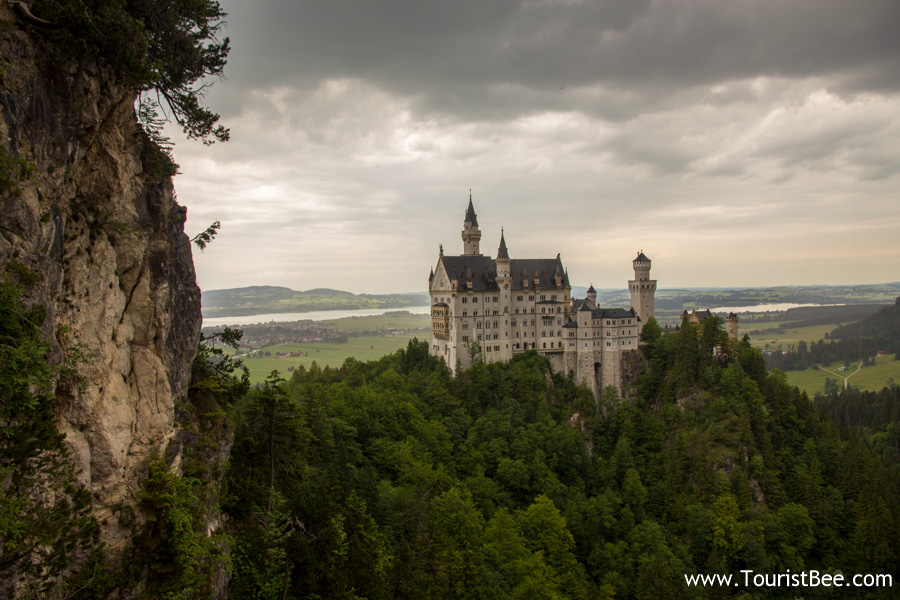 Having been opened to the public in 1886, Neuschwanstein is a relatively new castle.  However, its unbelievably picturesque location and medieval look explain why it is the most famous castle in the world.

During the summer, these castles are very busy with tourists. If you are planning to visit these castles we found that it is best to visit Neuschvanstein in the morning and then Hohenschwangau later in the day. Most people do it the other way around and this is how we visited as well, but Neuschvanstein gets really busy around noon.

Each castle tour takes less than one hour but you need to plan for at least two hours for each castle to account for waiting and the shuttle bus ride.

If you are planning a trip to this beautiful are you can find budget hotels in the Schwangau region. We stayed at the inexpensive Alpengasthof Geiselstein in the nearby village of Halblech, only 10 minutes from the castles.

Dating from the fourteen century Hohenschwangau (which means High Schwangau) was built initially as a fortress.  It was the childhood residence of King Ludwig, the builder of Neuschwanstein Castle on the nearby hill. 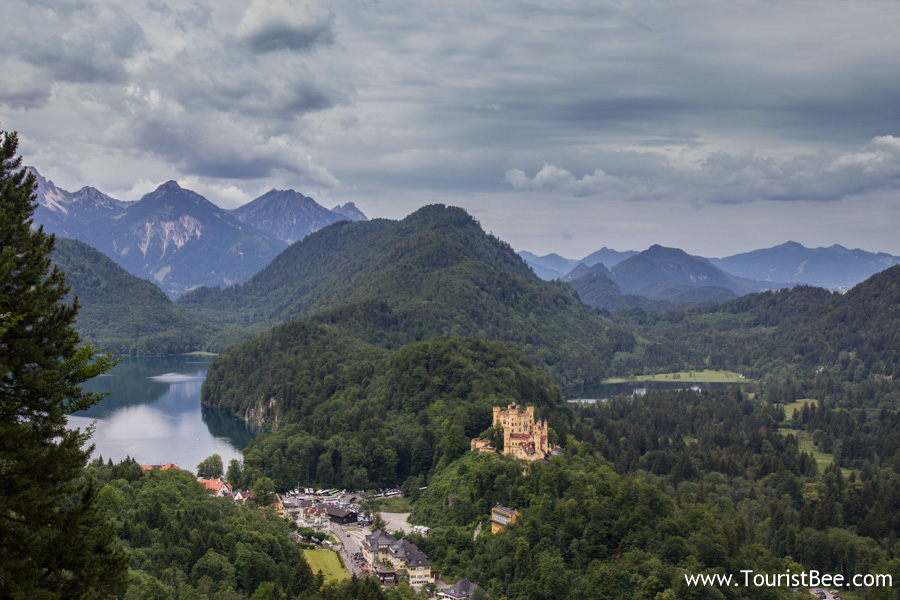 Hohenschwangau Castle overlooks the pristine Alpsee lake and it provides an unbelievable panorama of the surrounding mountains and hillsides.

Coming third of the castles in Bavaria, Linderhof is the smallest of the three palaces built by King Ludwig II and the only one which he lived to see completed. Built as a smaller version of Palais de Versailles near Paris, Linderhof is situated in absolutely stunning natural setting and is just a delight to visit and stroll through its gardens. 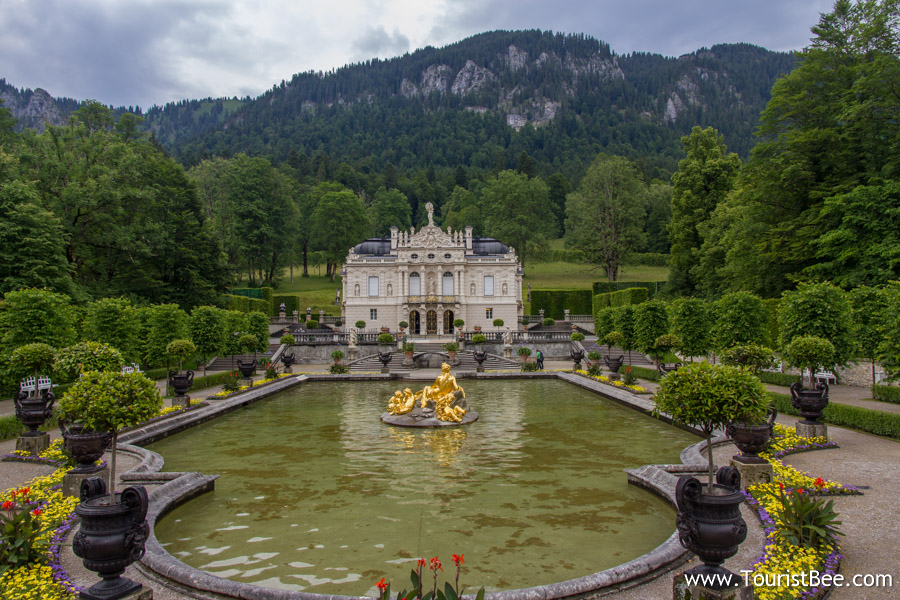 Ludwig has brought lots of mystery to Linderhof Castle by building a very secretive and  eerie artificial cave just for himself. Also called Venus Grotto, the cave houses a large scale scene from Wagner’s Tannhauser opera. It features an artificial waterfall and spotlights with changing colors which were an amazing technological achievement for those times.

If you start early in the morning and you plan well you can see all three castles in one day.

If you are looking to stay in the area you can find budget places to stay near Linderhof Castle.

Coming into the small village of Harburg, the rolling hills of the famous Romantic Road open up to an old castle. Harburg is a tiny village with a large castle dominating the hills. It is one of my favorite castles in Bavaria. 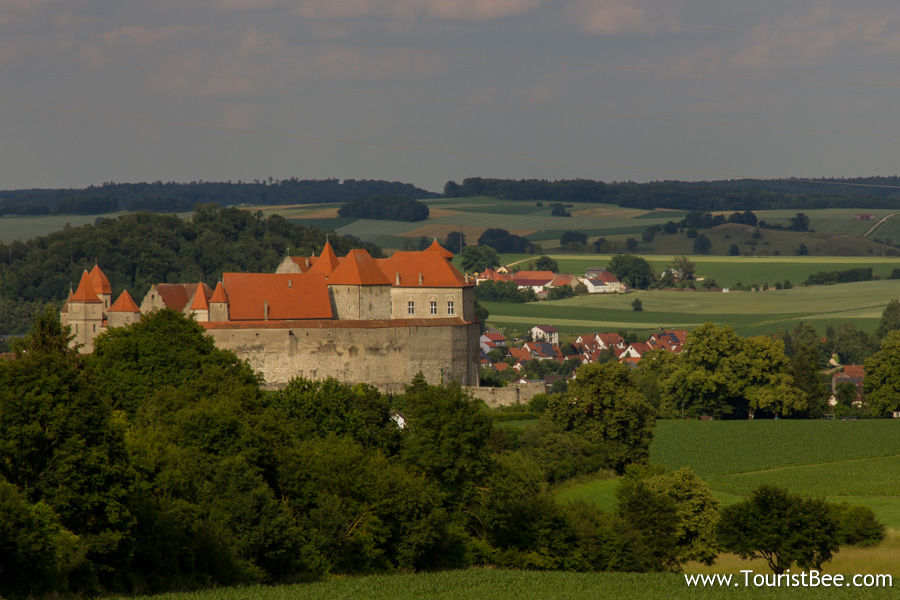 Harburg Castle is a large medieval fortress dating from around 1150. Unlike many of Germany’s castles which have been damaged during World War 2, this castle has remained intact over the centuries.
See my photos from Harburg

This large medieval stronghold that dominates the village below and the surrounding landscape. It has an idyllic setting with a slow flowing river, a village with tiny streets and Harburg Castle perched on the hill.

We came to Harburg driving the picturesque Romantic Road from Rothenburg and Dinklesbuhl. Harburg Castle appears after a bend in the road and it provides a gorgeous view right from the road.

Germany’s Romantic Road is best visited by renting a car in Germany and driving it through the countryside all the way to the Alps.

If you are planning a trip to this area you can find budget hotels on Germany’s Romantic Strasse.

Nuremberg castle is a formidable medieval fortress sitting on the hill overlooking the city bearing its name. Since much of Germany was destroyed during world war 2, Nuremberg castle was also badly damaged. Only one tower and two chapel buildings surviving the bombardment. 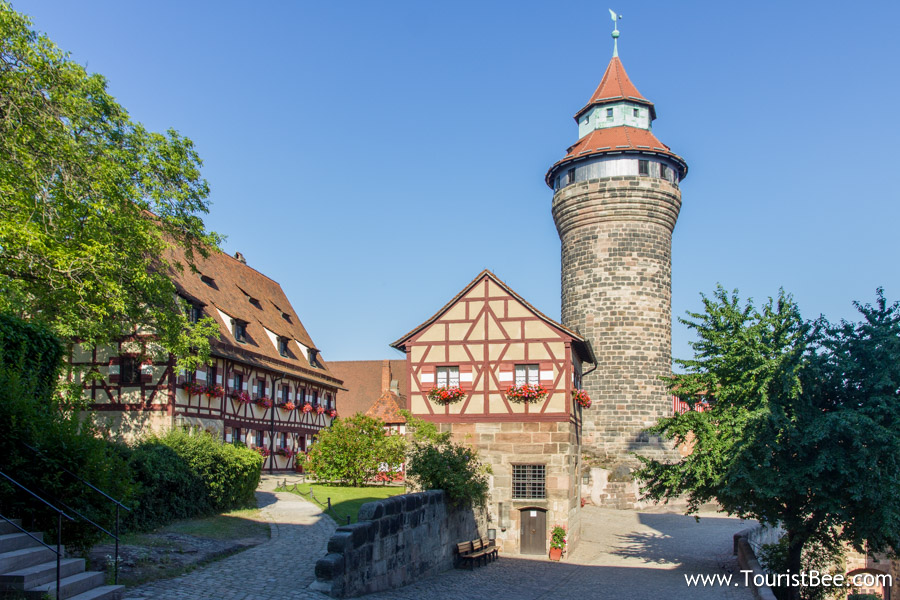 In the 1920s Nuremberg Castle was rebuild according to the original plans and it still dominates the city from the hilltop. Nuremberg Castle brought back memories from visiting beautiful British castles.

We came to Nuremberg from Munich, so if you are planning a trip to this area you can find great hotel prices in Nuremberg or you can look for budget places to stay in Munich.

Is it worth visiting castles in Bavaria, Germany?

Absolutely! Even though World War 2 has damaged most historical landmarks, Germany has done an amazing job rebuilding them according to the original plans.In addition they created beautiful museums around these landmarks. We loved each one of them.