Vienna Austria…such a melody: Mozart, Strauss and the Blue Danube waltz! We heard and imagined so much about this city and about its beauty that it became our dream to visit it. Finally, we had the opportunity to visit and we were very excited. Read on about our beautiful walking tour of Vienna.

What to Expect On Your Walking Tour of Vienna? 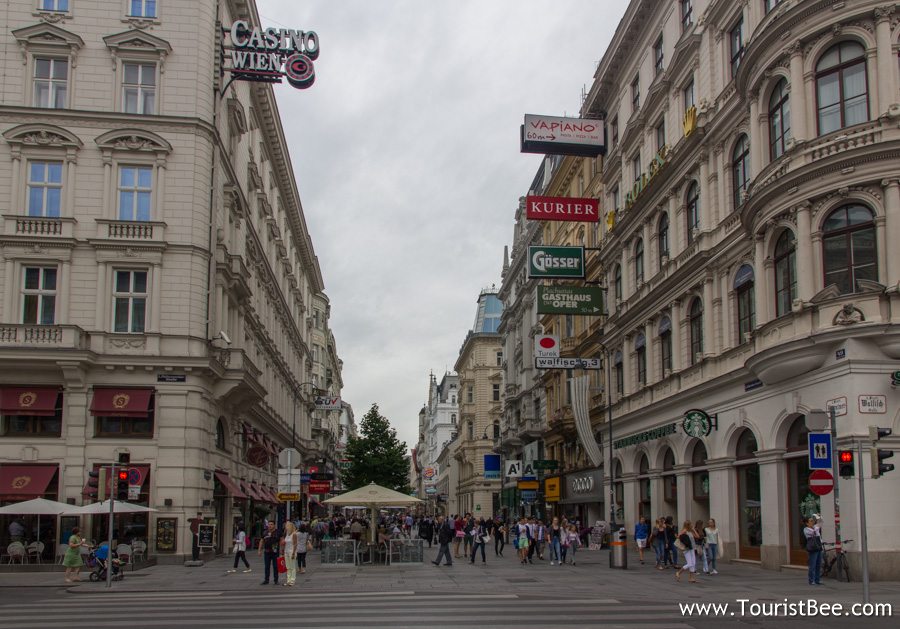 We were grateful for our great hotel location with easy access to transportation and free parking since we knew it was difficult and expensive to find parking for our rental car in central Vienna.

After a short walk to the tram station and a 20 minute ride, the tram dropped us off just in front of the beautiful Opera building. I felt so much emotion to finally start my walking tour of Vienna…the dream became reality!

We made our way inside the sumptuous Opera building but we couldn’t visit at that time (early in the morning) and the music shows were only running later at night. Outside the Opera building a bunch of ticket salesmen dressed in fake Mozart costumes invited us to music and ballet concerts…we felt a little bit like visiting Las Vegas…where you are assaulted by show ticket sellers. And they were not the only ones…the town was filled with concert ticket sellers dressed in 18 century clothes and wearing big white wigs. A bit disappointed at the beginning, with our map in hand, we finally started our tour of beautiful Vienna.

Vienna is a large city, filled with tourists but a beautiful city. We were a little disappointed because big cities are not really for us. We had to walk a lot to get from one attraction to the other…quite a bit more than we expected. This feeling became even stronger because we arrived in Vienna from our walking tour of cozy Salzburg. Just be prepared to walk a lot on your walking tour of Vienna.

My Favorite Tourist Attractions in Vienna

There are so many tourist attractions that it is difficult to pick and create a one day walking tour of Vienna. Based on our experience traveling with our children we picked things we could do together.

With our list of attractions and a map in hand we started our beautiful walking tour of Vienna. However, we were not prepared for how large the city truly was. So, we walked a lot and we were very tired at the end of the day. 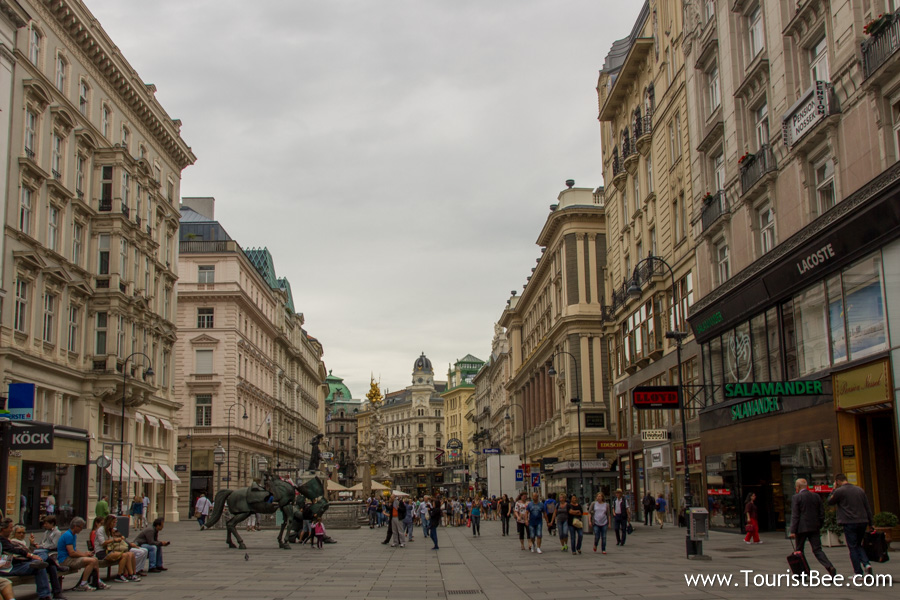 Following the crowds and our map from the Opera building where our tram left us, we started our walking tour of Vienna by making our way to the large Graben pedestrian area which is teeming with tourists, shops and street performers. The Vienna Dom church dominates this entire area and it is an impressive building both outside and inside. We took our time visiting this beautiful church.

Stay in Vienna. We stayed at the beautiful Hotel Bosei which has a great location, free breakfast, free parking and easy access to public transportation. If you’re looking for another location closer to central Vienna, you can find other budget hotels in Vienna. 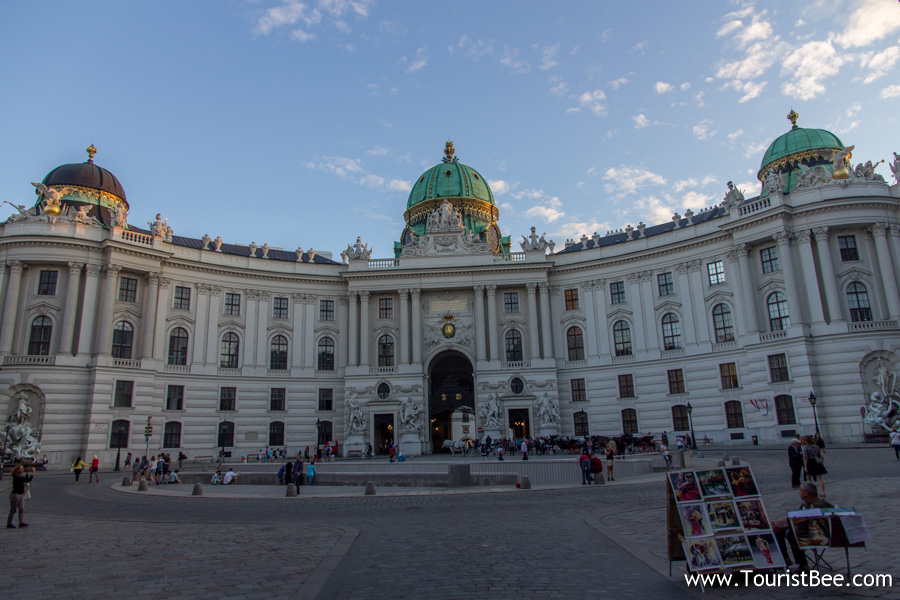 Our walking tour of Vienna brought us to the large and imposing Hofburg Palace which is easily accessible from the pedestrian area. It is a large building as we saw it from a distance. Once we got closer to it we were very impressed by how majestic and refined it is. We could immediately imagine old horse carriages pulling in front and important people descending being dressed ready for a ball. The inside of Hofburg Palace is just as impressive as the outside. It is well worth your time visiting the large museum inside which includes the apartments of the mysterious princess Cici. Even our kids enjoyed the museum.  We highly recommend visiting the Hofburg Palace museum.

The entire area around the Hofburg Palace is filled with history and…Franz Joseph. He is the founder of modern Vienna and most of the museums have been build during his reign. This is the reason why right inside the Hofburg Palace area you find the National Library and the museum of the Austrian archives.

If you are visiting Vienna, you can find discounted Vienna museum and tour tickets. 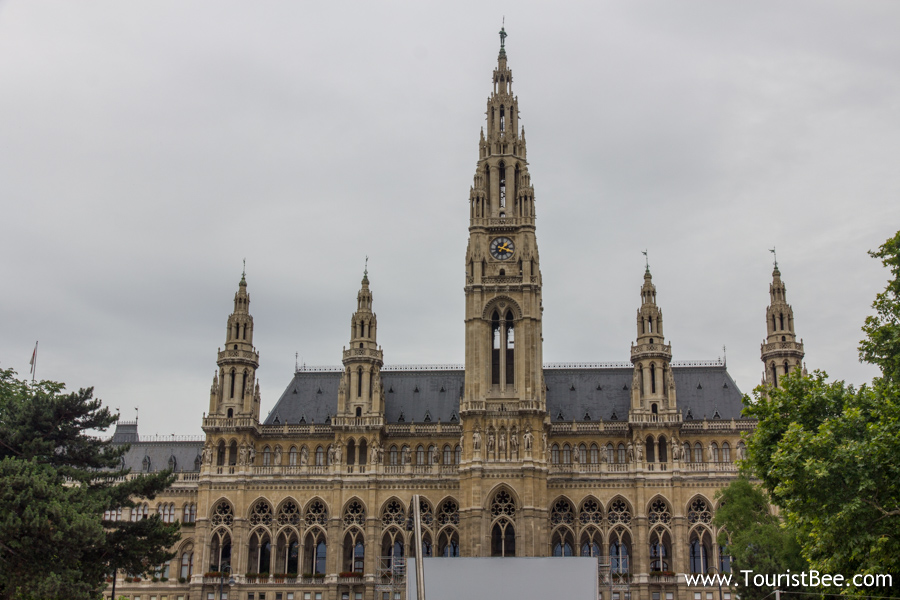 After visiting the Hofburg Museum and Palace we walked by the National Library building and the small Volkspark with beautiful flower arrangements. We crossed the busy Burgring street that was filled with tour buses. We followed our map towards the Austrian Parliament building and further down the amazing City Hall (Rathaus) building.

Even though we were really thinking about visiting the large Natural History Museum we decided not to do that since our kids were very tired and instead we took a break inside the Volkspark city park and have some lunch.  This is a great place for a lunch during your walking tour of Vienna. 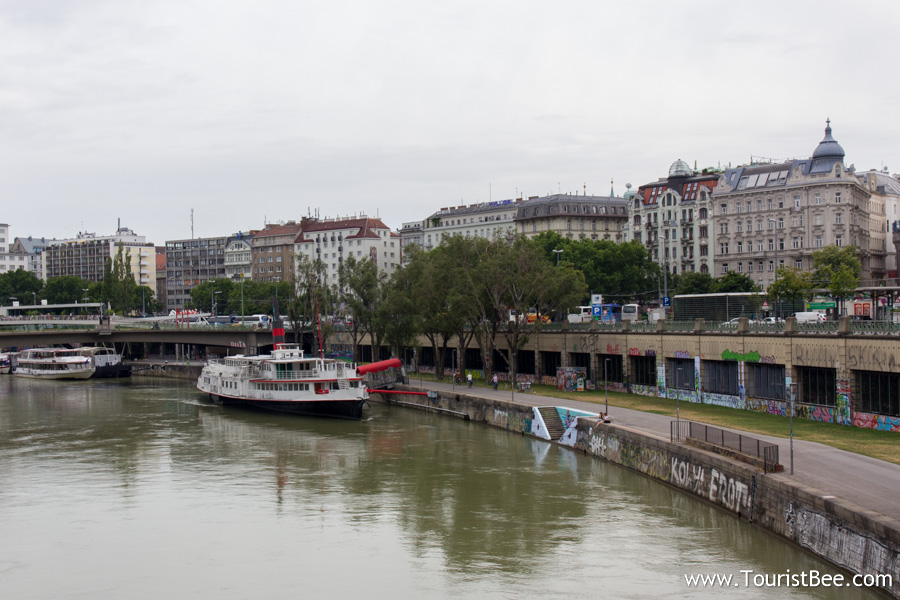 River Danube passing through Vienna
See my photos from Vienna

Just a childhood fantasy I think, which turned out to cost us a lot of time and effort. Good thing we took a longer break in the park. The Danube area we were able to reach was somewhat industrial and dirtier which immediately made me realize that it is out of the tourist path. However, I am glad I saw the Danube River in Vienna.

This was one mistake we made because we did not realized how far it was for our family. We had to carry our 2 kids (6 and 9 years old) in the back. So we got back in the town center exhausted where is worth to spend your time. I would not recommend to visit the river. The River Danube area closest to the town center was industrial and messy with graffiti everywhere.

If you have more time in Vienna, you can take a boat tour of the River Danube as it goes through Vienna. 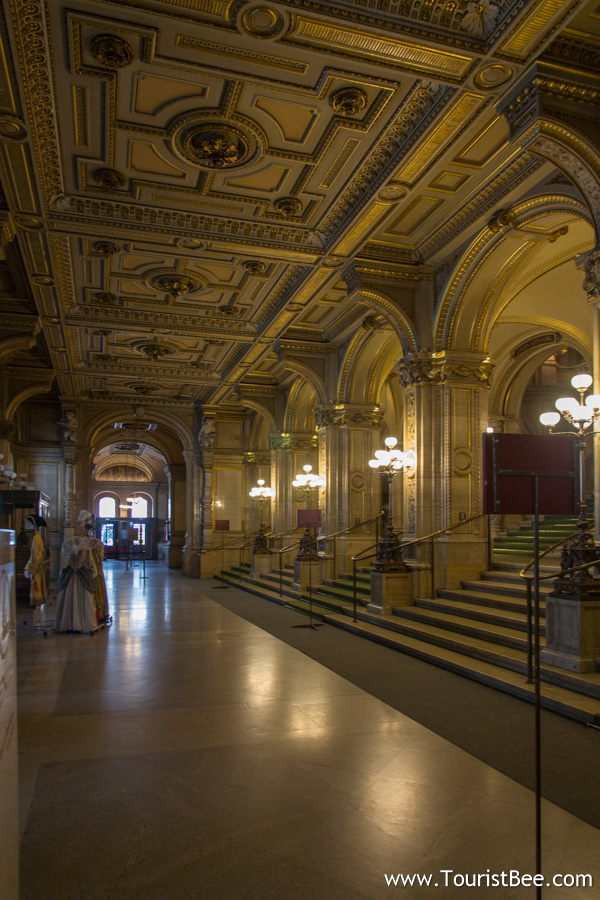 Our walking tour of Vienna had to contain a classical music show. This was a difficult decision because we were overwhelmed by the offers. On every street we walked we found vendors bombarding us with music shows. We kept saying no because none of them looked interesting enough for kids and at first we felt like we’re being tricked into buying something much more expensive than it really is.

Eventually, in the afternoon, after visiting the Hofburg Palace we found a family friendly show that included some classical music and ballet. It is hard to recommend which music shows to pick. You just have to take a look and choose for yourself when you visit Vienna.

We attended the music show in the old Auersperg Palace building where we finally relaxed after an entire day of walking. Even though we were a bit nervous about spending a lot of money for a music show, we really enjoyed the music and ballet. Our son however, was so tired that he slept through the entire performance. Our daughter on the other hand loved the show. In the end, it was a good experience for the entire family. Our walking tour of Vienna made us tired but very thankful to have been able to visit this beautiful city. 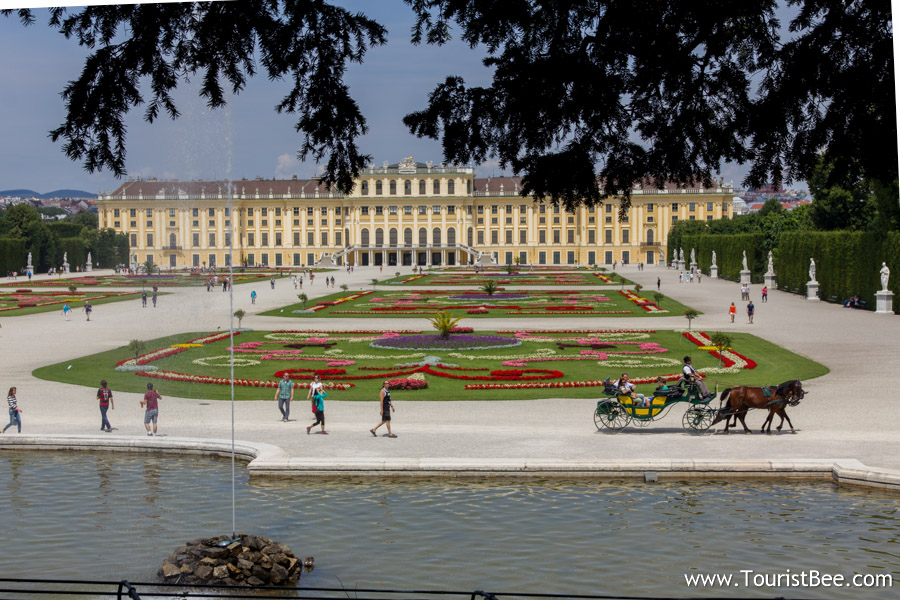 The following day we dedicated to visiting the beautiful Schonbrunn Castle. This beautiful palace was modeled after the famous French Versailles Palace. Even the lavish gardens are laid out in a similar fashion to the intricate gardens of Versailles.

Plan Your Trip to Vienna Austria

If you are planning a trip to Vienna, my first advice to you is not to drive in central Vienna. Find a hotel and come to central Vienna by tram or bus. This list of resource contains some affiliate links for my trusted travel partners.

Is Vienna Worth Visiting?

We liked our walking tour of Vienna very much even though the city was much larger than we expected. There is beautiful architecture and lots and lots of history everywhere. However, it is true that there is nothing exceptional or unique about Vienna. While the museums and tourist attractions are great, there is nothing really spectacular about Vienna. So in a sense, Vienna didn’t live up to our dreams and expectations being a little bit too large and a little bit too common for us. However, completing a walking tour of Vienna will give you lots of pleasant memories.