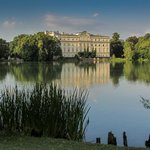 The old musical Sound of Music has become a classic being filled with idyllic scenes in and around Salzburg, Austria. The charm of Salzburg and its surrounding areas add so much color and freshness to the movie that we could watch Sound of Music over and over again. Read on about the Sound of Music movie locations in Salzburg.

Introduction to the Sound of Music Movie and Salzburg

You can see the whole old town Salzburg in the background when they sing the ‘Do-Re-Mi’ song. This song has become the signature song for Sound of Music and it is truly beautiful. The movie follows the Von Trapp family all around Salzburg and the surrounding mountain areas in a mix of idyllic scenes and disturbing political changes during Europe at the beginning of World War 2.

Having set the movie in peaceful and musical Salzburg, it creates a powerful contrast with the ugly and frightening prospects of war that come to this beautiful part of Europe. In the middle of it all are the Von Trapp children and their nanny (Julie Andrews). My family loves watching the Sound of Music and the fact that we have visited Salzburg makes the experience event better.

If you are planning to visit Salzburg it is a great idea to be mindful of some of the Sound of Music movie locations as you walk around the city. And when you come back home watch the movie again to relive some of these beautiful sights.

We usually don’t take any guided tours but if you are pressed for time in Salzburg you can book the original Sound of Music movie tour which will take you to all the movie locations in and around Salzburg.

Maria and the children sing ‘Do-Re-Mi’ while dancing around the horse fountain and using the steps as a musical scale. 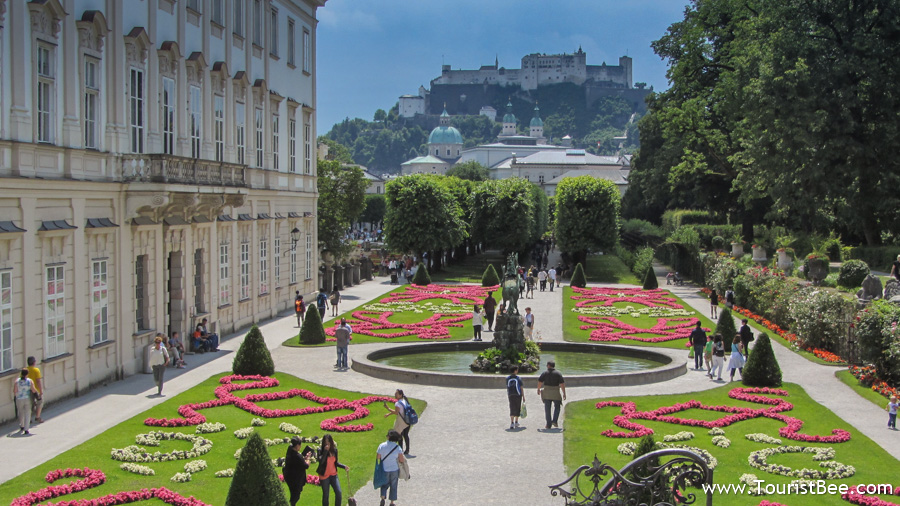 Winkler Terrace its high up on Mönchsberg Hill overlooking the West side of old town where ‘Do Re Mi’ began in The Sound of Music.

Horse Bath is a public fountains which once served as a Medieval horse bath. This is where Maria and the kids dance around while singing “My Favorite Things”.

Festival Hall (Salzburger Festspielhaus) is the place where the Von Trapps sung “So Long, Farewell” before escaping the Nazis.

St. Peter’s Church (Petersfriedhof) is the beautiful flower-filled cemetery of Saint Peter’s Church is where the Von Trapps hid from Nazis in The Sound of Music, although the actual scene was filmed in Hollywood. 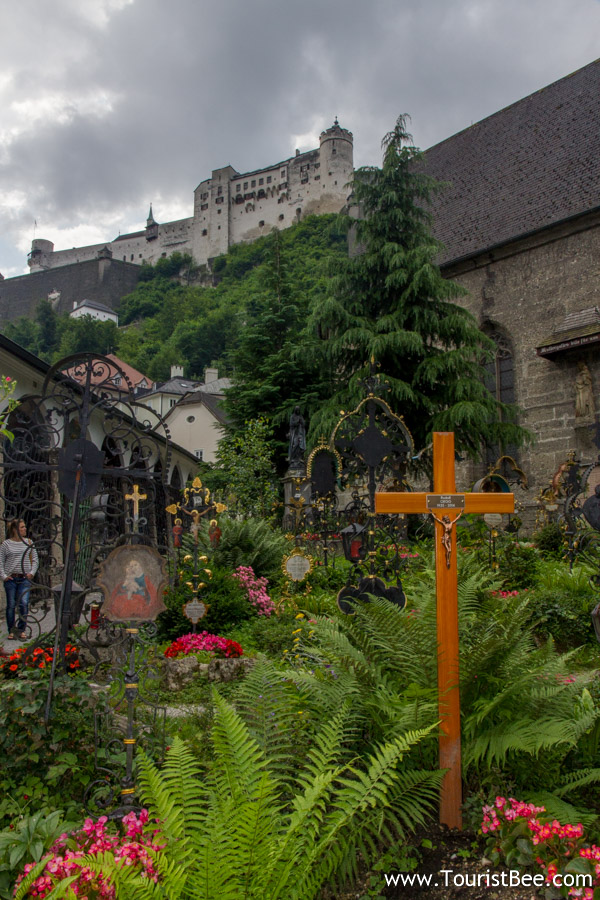 Salzburg, Austria – Petersfriedhof is a picturesque cemetery with baroque tombs of nobility as well as 12th century catacombs. This is where the Von Trapps hid from the Nazis.
See my photos from Salzburg 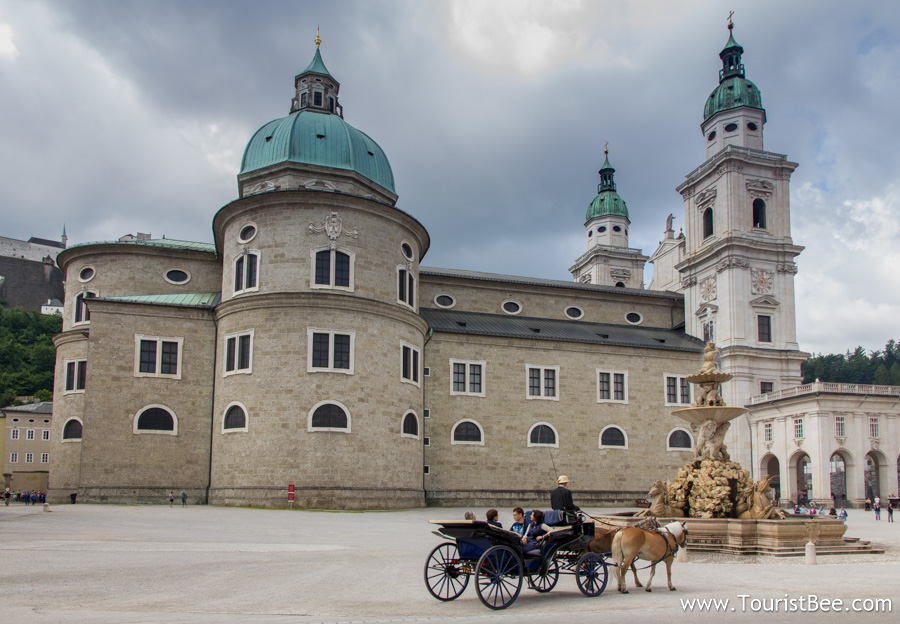 Salzburg, Austria – Horse carriage passing by the beautiful Salzburg Dome building in Residenzplatz square. This square is featured in the “Do re mi” song.
See more photos from Salzburg, Austria

This large square is the location where the Von Trapp family performs ‘I Have Confidence in Me’ in The Sound of Music.

Mozard Bridge (Mozartsteg) is a pedestrian foot bridge named after Salzburg’s most famous resident, Mozart, opened in 1903. In the Sound of Music it is where Maria and the kids skip across while singing ‘Do Re Mi’.

Nonberg Abbey (Stift Nonnberg) is probably the most famous Sound of Music movie location in Salzburg. Sitting above the city, the historic Nonnberg Abbey is the oldest convent in the German speaking world. Sound of Music fans will remember the nuns singing the song ‘Maria’ at Nonnberg. The Abbey happens to be the same Benedictine Convent that the real life Maria attended, thought at, and was married in. The filming of Maria’s wedding scene for the movie however, was at Collegiate Church in Mondsee Austria.

Leopold Palace (Schloss Leopoldskron) and the beautiful lake is the main film location of the Von Trapp family home in the movie. All of the lake terrace scenes, including the children falling into the water, were shot at the property directly next door to main palace building. 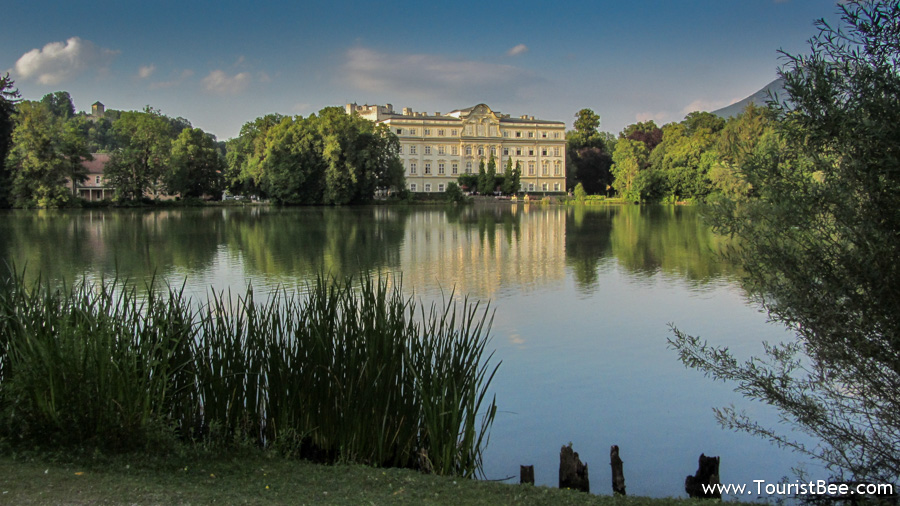 Salzburg, Austria – The beautiful lake and Leopoldskron Palace and Hotel (Schloss Leopoldskron) is one of the Sound of Music sights in Salzburg. It was the Von Trapp residence in the movie.
See my photos from Salzburg

Like many parts of the movie, the shots taking place inside the family home like the bedroom and staircase were actually all filmed on a studio set in California.

Fronhnburg Castle (Schloss Frohnburg), built in 1660, is used as the backdrop for the Von Trapp family home in every scene that does not involve the lake. The most iconic feature you’ll recognize are the Von Trapp Mansion Gates where Maria starts singing ‘I have Confidence’. This is also where the kids push the family car during the escape and where the Captain pulls down the Nazi flag after the couple’s honeymoon. The grounds of the mansion are now the Mozarteum Music Academy, but the gates and wall from the movie are both accessible right next to the road.

11. The Sound of Music Pavilion

One of the most famous and romantic scenes of The Sound of Music was filmed in this timeless gazebo when Liesl sings ’16 going on 17′. While the Pavilion is located at Hellbrunn Palace today, during the filming the Gazebo was built at Leopold Palace.

Other scenes from the movie Sound of Music where filmed outside of the city, for example at Anif Palace, Hohenwerfen Castles, Mondsee, Fuschl, St. Gilgen and Lake Wolfgang.

Book the original Sound of Music Tour if you want a local guide to take you to the best movie locations.  You can also search for other local Salzburg tours & museum tickets.