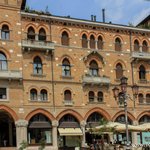 Treviso is a city in the region of Veneto in Northern Italy. Because Treviso is so close to Venice it gets bypassed by tourists because Venice is such a hot tourist attraction. This makes Treviso a quiet town to visit with plenty of historical buildings and attractions. We definitely enjoyed walking through its narrow streets and admiring the many old buildings scattered all over the town. Come along with me on a walking tour of Treviso.


Treviso boasts a long history, a large university and it is also an important industrial city. All this makes Treviso a worthwhile tourist attraction…if you have have extra time in the Venice area. With our list of attractions and a map in hand, let’s start enjoying my favorite things to do in Treviso.

What to Expect When Exploring Things to Do in Treviso? 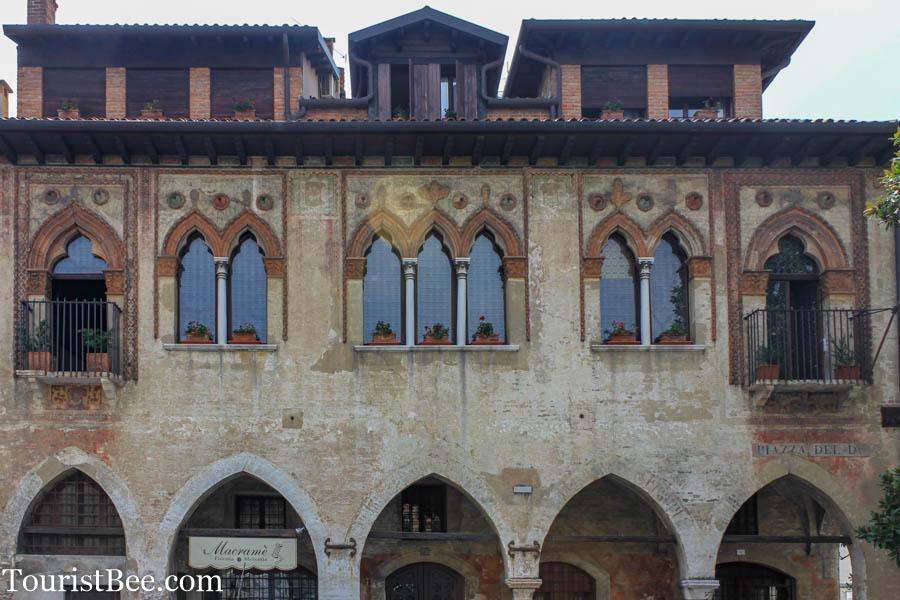 Beautiful view of the river Sile running through one of the many canals in Treviso.
See my photos from Treviso

If I could summarize our walking tour of Treviso in one word, it would be: surprise. We came here in the middle of the summer and it was hot.

My wife had some trouble with her stomach and was not feeling too well, so we decided to take it easier and go to Treviso which was closer to the Venice area where we were staying.

We assumed there is not much to see here and that we would be able to get back quicker for her to rest. However, we were pleasantly surprised when we found plenty of tourist attractions in Treviso.

In addition, even though it is close to Venice, Treviso is not a very popular tourist attraction which made the whole town not be crowded at all. Overall, Treviso gave us a great feeling of surprise and relaxation. 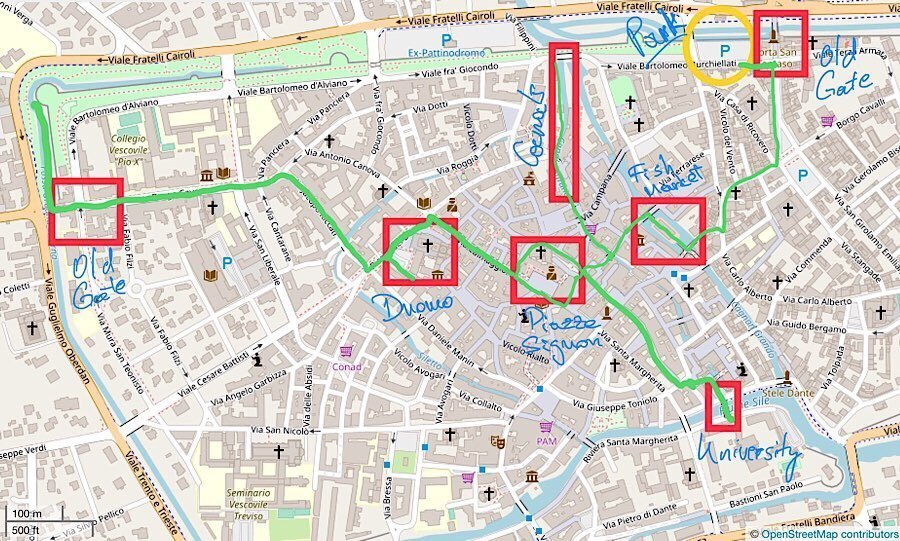 With our map in hand and list of attractions nearby we started our walking tour of Treviso. So put on some comfortable shoes and let’s enjoy a few charming things to do in Treviso. 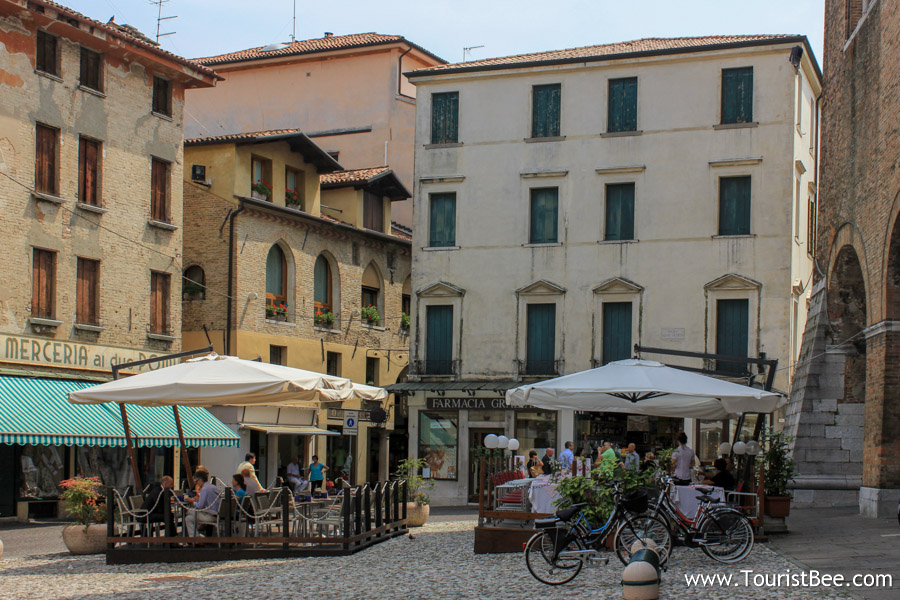 Topping my favorite things to do in Treviso we find Piazza dei Signori, boasting a beautiful clock tower. We enjoyed the narrow streets and bridges and we finally made it. Walking through the streets was enjoyable because the city was pretty clean and definitely not crowded at all. 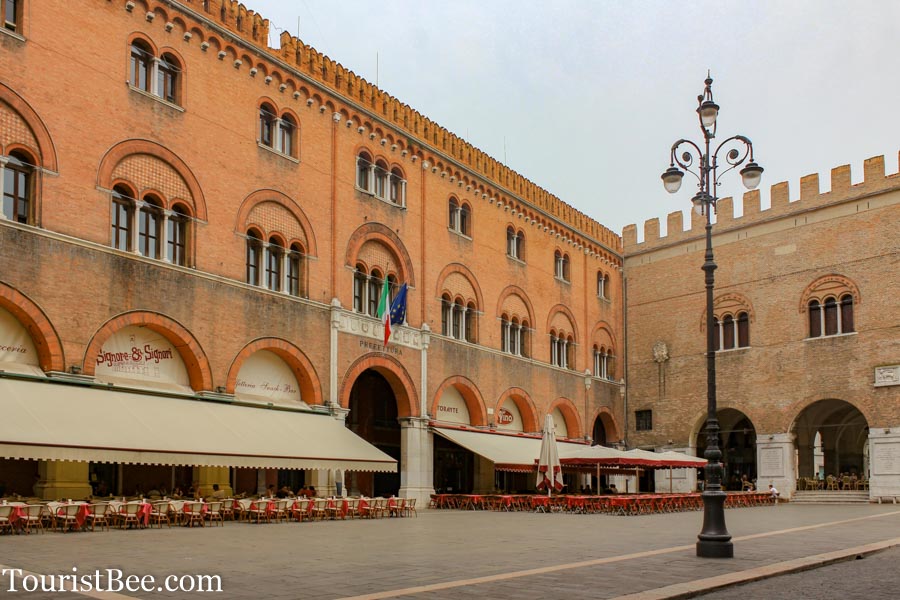 Once we parked our rental car in Piazza Santa Maria Maggiore we started our walking tour of Treviso on Via Carlo Alberto towards Piazza dei Signori and Palazzo dei Trecento which is pretty much the center of the old town. 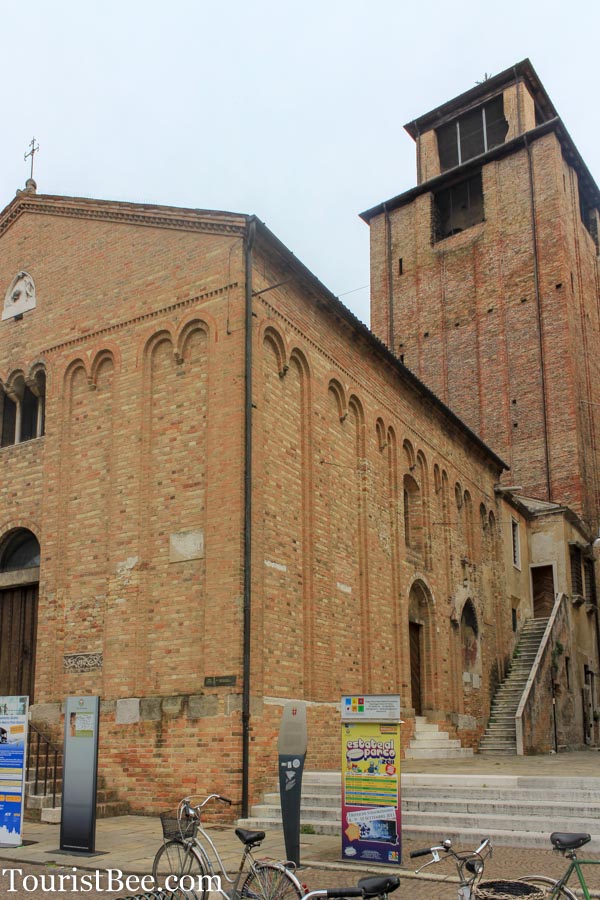 The Church of Saint John the Baptist build in the 13th century. Chiesa di San Giovanni Battistero.
See my photos from Treviso

Continuing with my favorite things to do in Treviso, we come to the dome. After admiring the old buildings and the new Benetton headquarter building we continued our walking tour of Treviso on Via Calmaggiore down towards the large Battistero di San Giovanni building in Piazza del Duomo.
The church of San Giovanni Battista is an important example of Romanesque architecture in Treviso. Consecrated to Saint John the Baptist, the building is located north of the cathedral; overlooks Piazza del Duomo and is bordered by Via Calmaggiore. 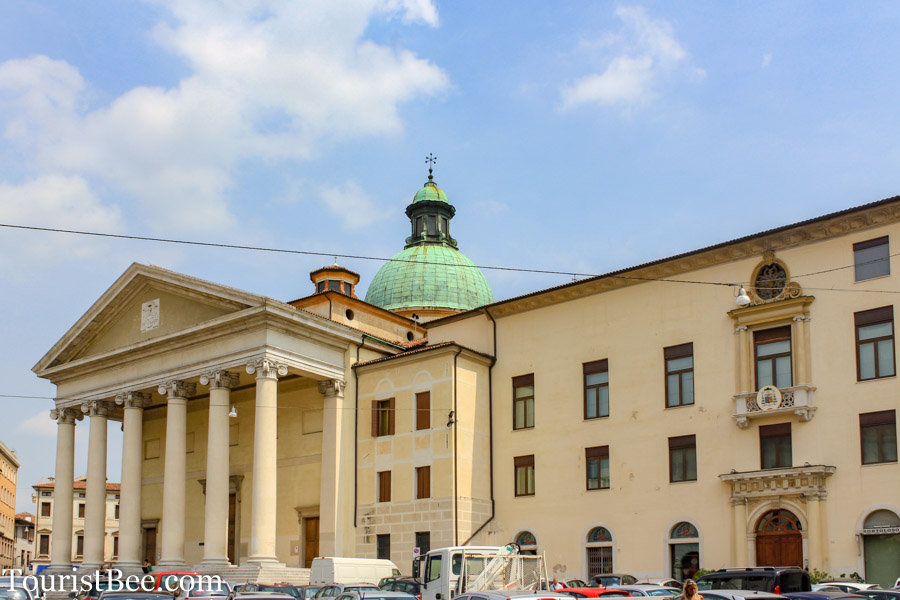 Il Duomo of Treviso dates back to the early Christian age (6th century) and was built in a central area of the city. Between the eleventh and twelfth centuries the area assumed its current structure and the cathedral itself was modified according to the Romanesque style (of this period is the crypt). There are two chapels inside the church.
The chapel of the Santissimo (XVI century) houses the tomb of the bishop Niccolò Franco (XV century).

The chapel of the Malchiostro dates back to 1520 and contains a famous Annunciation by Titian. Right before entering Piazza del Duomo, coming from Piazza de Signori on Via Canoniche we found an early Christian mosaic (click for map location) dating from 4th century. This again was surprising. 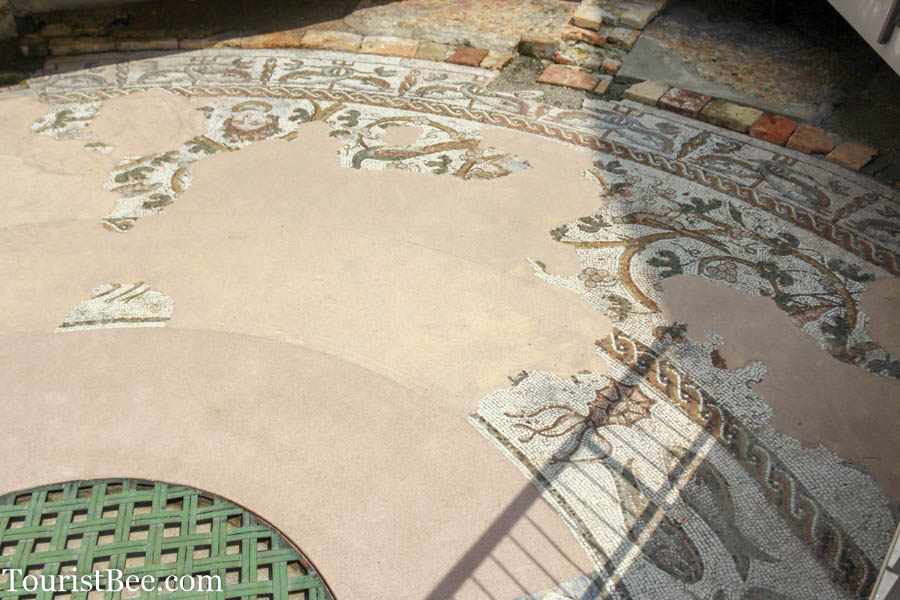 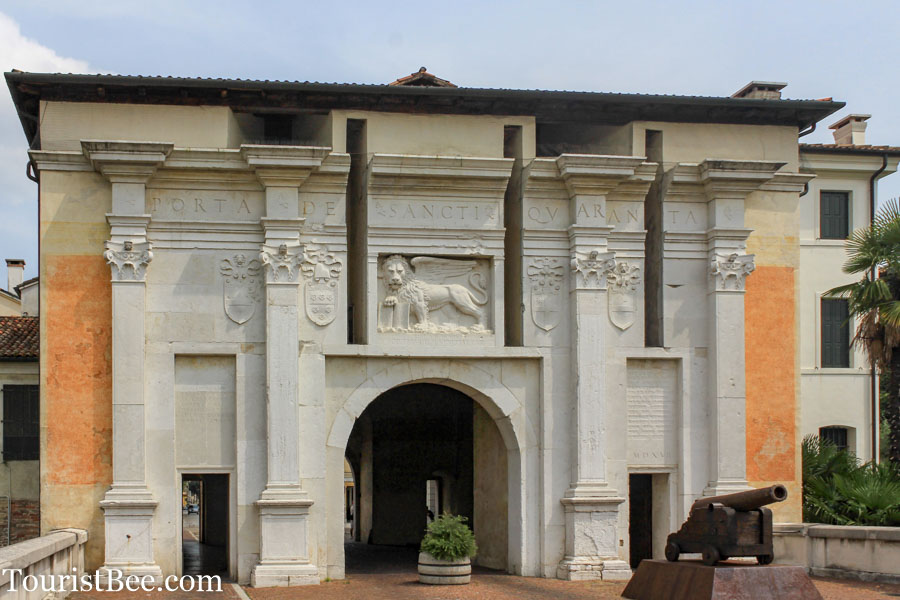 The ancient entrance gate of Porta Santi Quaranta marks the North Western entrance to the medieval town. It was the preferred entrance for local farmers trying to sell their produce inside city walls.
See my photos from Treviso

The Ancient Wall (Il Muro) are the remains of the old medieval wall that used to protect the old fortress. There are several old gates still standing that are worth seeing. Look for one of the several ancient entry gates around the old wall. Most notable is Porta San Tomaso (Saint Thomas Gate) located on the North East corner of the ancient wall. Exploring some part of the old medieval wall was one of our favorite things to do in Treviso. 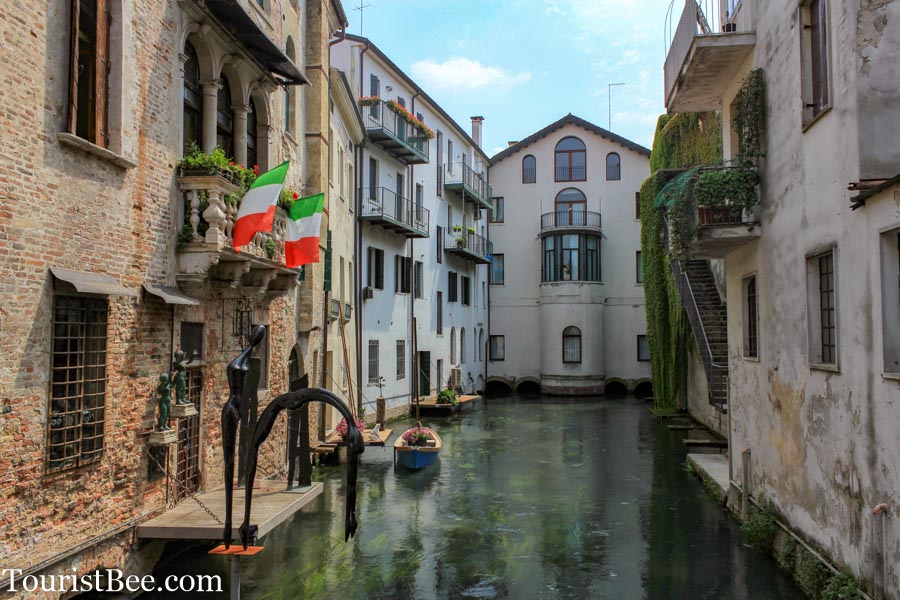 Known as little Venice, Treviso has quite a few water canals crossing the old town inside the ancient city walls. The most famous of these canals is Buranelli which traverses the town from North to South. Buranelli Canals run along River Cagnan all the way through Treviso old town and it meets the larger River Sile. What makes the Buranelli canals special, is the covered shopping area built right alongside the river as it winds its way down South.

The Buranelli Canals are a joy to walk along especially on sunny days, which abound in the summer. History is everywhere you look and in addition, you will also find beautiful restaurants and cafes which are always a pleasure to visit. The people are very courteous and the place is tidy and neat. Walking along the Buranelli Canals is definitely on my list of things to do in Treviso. 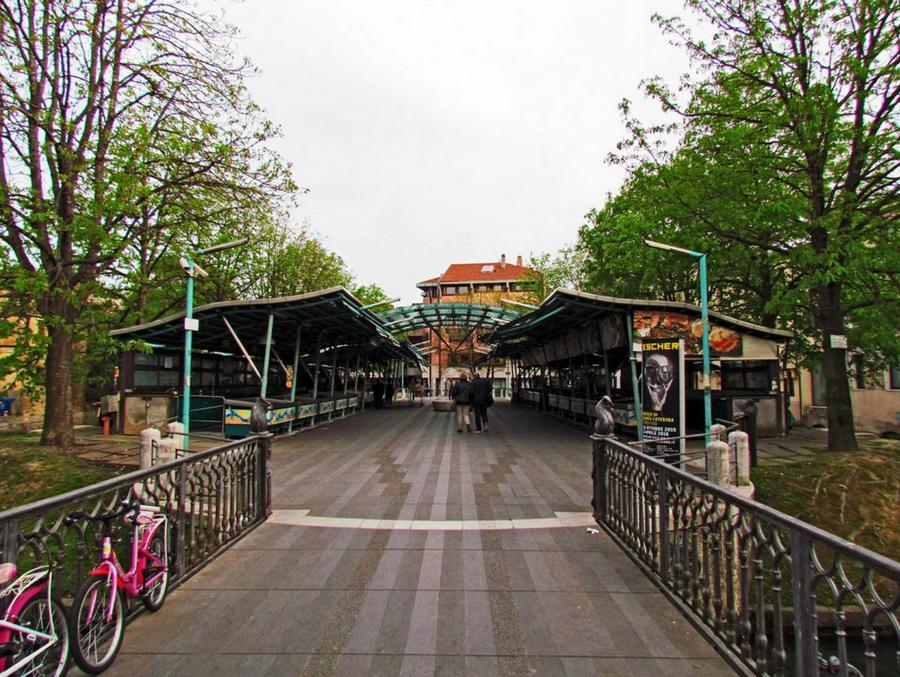 Entrance to the Buranelli Fish Market
Photo by -marika bortolami- on Foter.com / CC BY

The fish market in Treviso is a great place to visit because it is situated on a small island in the middle of Buranelli Canals.  It is a place full of life and noises and obviously…fish smell.

From Buranelli Canals you can easily access the fish market from Via Pescheria (click for map location).

6. The Quirky Fountains of Treviso

Treviso also has its share of quirky little things which can be a great addition to any walking tour of Treviso. One of them, for example is a small old water fountain that gives Treviso its name. The  Tre Visi fountain – the fountain of three faces (click link for map location) has three sculpted faces each facing at 120 degrees from the others.

Secondly, Fontana delle Tete – the fountain with breasts (click link for map location) is the quirkiest of all. Used in the past to dispense wine, this small old fountain depicts a woman with bare breasts dispensing water through her nipples. If you have small children you might want to think about visiting this one.

Plan Your Trip to Treviso Italy

Here is a collection of the resources I recommend for planning your trip to Treviso. From picking a place to stay to where to find parking, this list of resources will help you enjoy my favorite things to do in Treviso.

Where to stay in Treviso? For a great location and experience, stay at beautiful Palazzina 300, which is located right across the clock tower. You can also search for more budget hotels in Treviso or in the surrounding Veneto area. There are many options in the area as Treviso can serve as a good based for exploring Venice as well.

Where to park in Treviso? You can find free parking in Treviso on the North side of town (click for location), right inside the ancient walls. This spot is great as it is very close to the beautiful ancient entry gate of Porta San Tomaso. You can also find some free parking inside old town by Santa Maria Maggiore church. This is a small parking lot, but rarely full.

Is it Worth Visiting Treviso?

If you haven’t visited Venice and the beautiful islands of Murano and Burano, then don’t visit Treviso. However, if you have a few extra days in the Venice area, then Treviso will be a nice day trip from Venice. So, is it worth visiting this city? It is definitely not a first tourist destination especially being in the Venice area, but it has its own appeal that will leave you surprised.

My list of best things to do in Treviso is part of my series called: 1 week in Northern Italy.